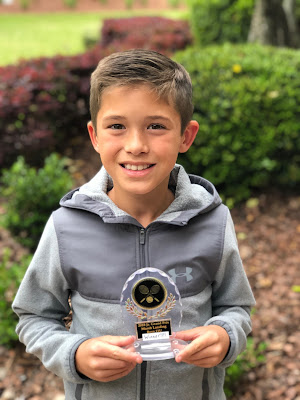 On Saturday, April 7th, Connor participated in the Marsh Landing Grand Prix tournament at the 12U level. We didn't realize when we'd signed him up, but the 12U was green dot balls, which Connor hasn't hit in quite a while. It was on a full court, but the balls were much less pressurized and didn't bounce as high and as quickly as the typically yellow ball. Connor did a good job adjusting to the situation though, and played really well throughout the day.

Connor won his the first three matches with scores of 6-1, 6-1, 6-0. He went to the final match confident, but the boy he played was fairly consistent and hit some tough balls to Connor. It was quite a match, and Connor got down on himself quite a bit at times. I didn't film it at all since he got irritated with me earlier in the day when he noticed me filming. Early on in the match, Connor had two games that got to deuce and to a deciding point and unfortunately lost both of them. He was down in the score late in the match and through sheer force of will he tied it up at 5-5. The kids played to 6 games for the set, so the next game was the deciding game. Connor got down in the game at 15-40. He dug in and played the match points against him heroically. He tied the game up at deuce, which meant the next point was not only the deciding point in the game, but also for the set, match, and tournament. On the final point of the day, both boys exchanged a few shots and then Connor hit a heavy high top spin ball to his opponents backhand. I was sitting on the sideline and was so thrilled to see it drop in to his opponent's corner and the boy swung at it futilely. I saw that it was at least 2 inches inside the sideline and baseline. Connor had won the match. But then, very late, his opponent called the ball out. I stood up, completely shocked. I was certain it was in. There were multiple adults near us that also saw it bounce in, and they were all irritated as well, even more so when I told them that it was the deciding point of the entire tournament. Connor asked to see a ball mark, and his opponent pointed to a random mark well outside the court. Unfortunately, the rules state that it's the kid's call, and it comes down to his word. Connor was understandably devastated, and we talked to the tournament director, but I knew that it would be futile since only other parents had been present and they can't overturn the call after the fact.

Connor begrudgingly accepted his "Runner Up" Trophy, and we left. At lunch, we talked about it with him. I think Andrea and I were actually more upset about it than he was. He said he hadn't actually seen the ball bounce in, but I told him I'd seen it, that two men next to me saw it, as well as his tennis teammate Robert. We found out the next day that Robert and Noah had played the same boy and had the same problems with cheating and ball calls in their matches with him. It was a very frustrating day for us, especially after Connor's heroic stands against multiple match points, and after hitting a winning shot.

We took Connor's trophy and glued a "WINNER!!!" mark over it. He is a winner in our book, and if he'd had an instant replay system available, or a person monitoring the match, I'm sure he'd have been the official winner.