Kids with Grandpa and Grandma

While Andrea and I were away at Sea Island, the kids had school and both had USTA team tennis matches. Grandpa came up to our house on Thursday evening and stayed the night with the kids so they could do their school at their desks on Friday and then be in PV already for tennis.

Thursday night, Paige had a makeup team tennis match at our club and played singles and doubles against Sawgrass.

On Friday, Connor and Paige had tennis matches scheduled at different clubs with their teams. We decided to try and simplify things for Grandpa and planned on only Connor playing tennis since it was at our club and was nearby. Paige's match was up at Atlantic Beach and obviously Grandpa couldn't be at both places at once. Paige had just played on Thursday, so we decided it would be a good idea for her to sit out on Friday. Paige realized that she was going to miss her match and she has been super motivated and cute about her tennis lately and was especially motivated to play after she realized it was the last match of her team's season. Paige called, texted, and Facetime called Mommy to beg her to figure something out. Andrea did some coordination and arranged it so Grandpa could drop Paige off at Gina's house and Paige could ride with them to the match and then Grandpa and Connor went to PV for his match. Both kids had very competitive matches and they both won their singles and doubles matches, so we're really glad that they both went. 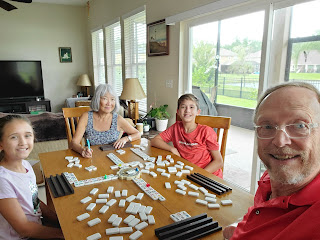