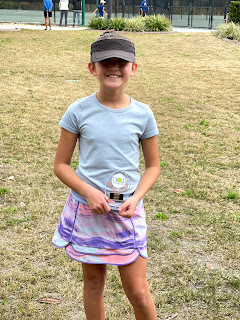 On Sunday, January 24th, Paige played in a level 6 green dot tournament at JCP. It was one of the first tournament that Paige has been to since USTA changed their format and a lot of their software and processes for the year. There were ten girls signed up for Paige's age group, however for some reason the tournament director had to split it in to two separate 5-girl groups. Paige actually sat out the first round of the tournament and just spent that time warming up with one of the girls from the other group that was also sitting out.

Paige ended up playing four matches against each of the girls in her group. The first match she found herself behind and lost the first set without winning a game, but she is a stubborn girl and fought her way back for a win. The next two girls were difficult, but Paige managed to win both matches.

Paige's final match was against Portland who is very evenly matched with Paige. They have played each other before, Paige won their first match and Portland one the second match a couple of months ago. Portland and Paige were both going in to the final match having won all of their matches, so we expected that whoever won the match would be the tournament champion.

The final match was so close it was hard to watch, I know it was difficult for Paige to hang in there, focus, and push through. She was definitely tired by the end and after the split sets they went to a 7 point tiebreaker. Portland got a lead in the tiebreaker and had a match point, but Paige fought it off and then Paige had a match point. Portland fought back and had another match point, but Paige came back again and ended up winning the match on her second opportunity. My heart was beating so fast just watching the final few points. Both girls should be proud of themselves, they played hard, showed a lot of guts, and it really could have gone either way.

Unfortunately, the match was structured in the most ridiculous way I'd ever seen. Although the girls were split in to two completely separate groups and no girls from group 1 played any girls from group 2, they ended up comparing their records in the end and as a result Paige ended up in second place overall for the tournament. Although Paige won every match and did everything possible, she officially got a second place trophy. We told her that we're so proud and it really doesn't matter about the trophy since it was like they're comparing two completely separate tournaments with completely different girls.

After learning the results, I snapped a pic of Paige with her trophy, and with Portland. Paige was not very happy at the time, was exhausted, so she kind of ended up with her visor pulled down a bit.

No matter what the results were, we are so proud of the way Paige played and her determination. We love you Paigie May! 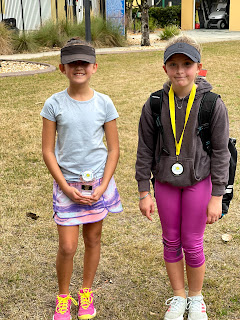