Connor and Paige both played in tennis tournaments on Sunday, February 7th. The tournaments were supposed to be on Saturday morning, but it has been pretty rainy lately so both got moved to Sunday.

Connor's got moved to Bartram High School, which is a hard court and one of his least favorite places to play. I took Connor and we met Grandma and Grandpa for lunch at Tijuana Flats and then we watched Connor play three matches. Connor won his first two matches and lost the third match. The competition was pretty difficult and Connor ended up getting third place overall since the tournament was arranged in the bizarre way where there are 2 separate groups of kids that don't play between each other, but then afterwards the records are all compared between the groups. 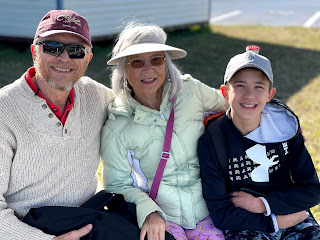 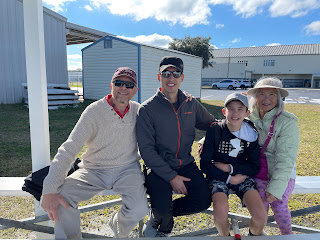 Paige played well at her tournament, which was at Queen's Harbor, and she ended up winning the tournament overall. Paige played three matches to make it to the final and she won in her fourth and final match. Paige played quite a few of the same girls she'd played recently, and had a great day of tennis. 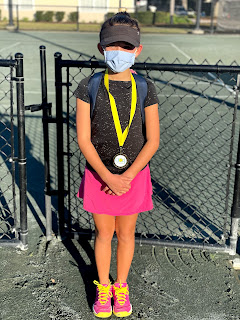 Overall, both kids played great and we're happy that they've been playing well. Both tournaments had a 1-set format to 5 games which we believe doesn't favor our kids since they are both stubborn and will often come back and win a match even after they lose the initial set. We got a communication after the tournament that the future tournaments will have a 2 out of 3 set format and we like the idea that there will be a reset after the first set. It's hard to come back if you have a bad start when there's just one set.