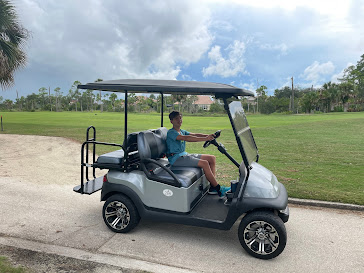 Andrea took Connor out for a drive around the neighborhood in the golf cart this past weekend. When he turns 15 we'll be practicing in a real car, so Andrea wanted him to get some more golf cart practice before then.

Connor's high school experience has been pretty positive so far, although he did have some difficulties with one class. We'd heard that the Spanish teacher at his high school can be difficult and even heard stories of Spanish speaking students that had trouble with the class. Connor's in 5 honors classes and for the first few weeks of high school he's been spending the most time on his Spanish homework and studying. Spanish isn't even an honors course and he's probably spent more time with Spanish than all his other courses combined. Since it's an elective, we discussed with him and decided it'd be best to drop it and take it another time so he can focus on the important classes. It took a bit of finagling and discussions with his principal, but we got the schedule change done last week and Connor's been so relieved. He's taking Team Sports instead and it gives his brain a bit of a break in the middle of the day.