Saturday, September 11th 2021, we went to the neighborhood tennis courts so the kids could participate in a level 7 tennis tournament. 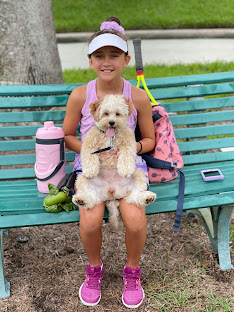 Paige had close matches to start off her day and sadly lost her first two matches. The tournament format isn't our favorite since there's just one set to 6, so no opportunity to reset after a bad set. Paige was up 5-3 in her first match and it ended up going to a deuce & deciding point at 5-5. Paige lost the point and lost the match. Her second match she was up 5-0 and on the changeover her opponent was sobbing and dejected. I was certain she'd win the match, but the other girl rallied and came back and won. Paige was disappointed as you can imagine, but give her opponent a lot of credit for digging in and working her way back in to the match. Paige won her last match thankfully so she ended the day on a positive note.
Connor started off rough and lost his first match but ended up winning the next three. I think he also would have been better off if the format was different, but unfortunately that was the way they ran the tournament on Saturday. 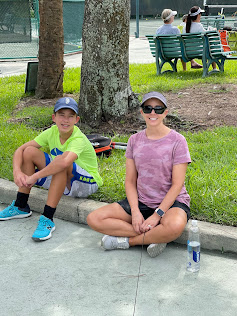