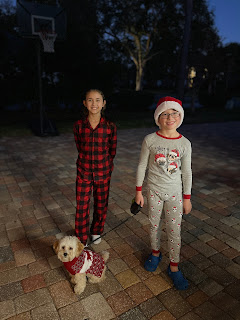 Christmas Eve was a pretty chill day for us at home. We went to TPC for lunch and then mostly relaxed. Paige has been enjoying hanging out with some of the neighbor kids lately and she and Bryson got the dogs together for a picnic. They pulled out some food for the dogs and Andrea took a picture of Paige holding Cooper and Bryson holding Millie Mae. 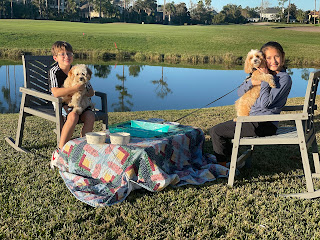 In the evening, Bryson decided he wanted to go caroling and Paige agreed to go along, somewhat reluctantly. They  put on their Christmas PJ's and Paige put Millie's Christmas sweater on as well. I didn't think it would last long so I sent them on their way, but Andrea was a bit worried about them roaming around in the dark so I jumped on my bike and followed them. They did pretty well and sang "Jingle Bells" at a few houses. I took a few videos, but it's a bit hard to hear them as I'm in the street on my bike. I uploaded the video of them singing at our house.