The kids both went to Camp Pinnacle for the first session of the summer this year. It was a new cabin for Paige, in Catawba, and a new experience for Connor being part of the "Wolfpack" and being given new responsibilities.

Connor was part of a leadership program this year and while he still got to do a lot of the fun activities at camp, his group was given some responsibilities and he was put to work as well. He was assigned to be a designated helper to one of the cabins and he was with one of the youngest groups of boys at camp. He had to help them at meal time getting their food, pouring cereal and milk, and had to help them stay organized as well during shower time and other activities. Connor said that he hated it at first and was way outside his comfort zone when he got thrown in to his duties, but after a couple of days it was more familiar to him and he actually enjoyed hanging out with the little kids and had a bunch of buddies at camp that loved having him around. The Wolfpack still got to do some fun activities, they put together a choreographed performance during the Airband competition and they had a lot of freedom around camp. Their big adventure this year was an overnight backpacking trip and they were put in charge of it. They split all the kids in the Wolfpack up so they'd have different responsibilities on the trip and Connor helped plan their route while others were in charge of food and planning other aspects of the trip. It sounds like it was a bit of a disaster and they left most of the food behind so they had to subsist on some pretty meager portions during their trip. It was a lesson learned and I think Connor learned a lot about logistics and what it takes to organize groups. They were given some peeks behind the scenes at camp and met with the staff a number of times so they could see the effort that went in to everything and they were also given the opportunity to help with planning activities. Connor loved it this year and he said that on a 1-10 scale that camp was a 9 this year and only missed one point because of how uncomfortable he was for a few days when he was first thrown in to unfamiliar situations. He came out of it more confident and more experienced interacting with people and it was an important developmental opportunity for him.

Paige's time at camp was fun in the sun and much less stressful than Connor's. Paige made a good friend Kahla from Miami and she got along well with her counselors and made friends with most of the girls in her cabin. It sounds like she enjoyed doing the Airband performance with her cabin and even Connor said that they did an awesome job and he thought they should have won the competition. Paige dominated at GaGaBall and tennis, and had an active time at camp, typically doing the outdoor and athletic options when given a choice. Paige sent one letter home wishing me a happy Father's day and she also filled out a form with a brief update about her activities and what she'd been up to. We sent her a postcard, some pictures that she forgot to take along with her, and a bunch of emails. It sounds like she wasn't homesick much this year and it sounds like she was most emotional on the last day when she had to say farewell to everyone. Paige and Connor both got their Camp Pinnacle Oars this year as it's their third year gift and they were presented to them at a ceremony at the close of the camp. 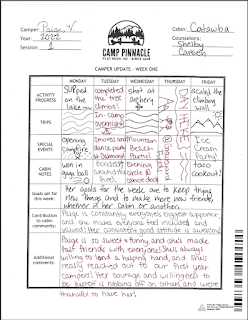 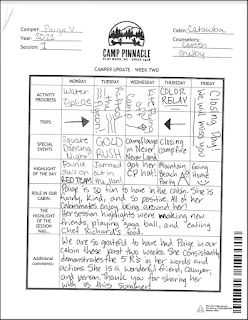 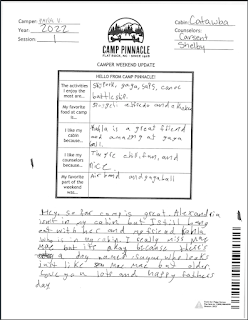 That's all for now, I plan to add a bunch of pics once the camp posts them online for everyone to download.