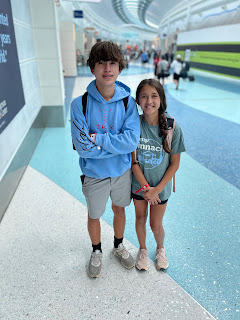 This year the kids flew home after camp was finished. It's not the most enjoyable drive to camp and when we go, we typically go a day early because pickup is in the mornings so it's a bit of a time commitment. I would have liked to pick them up from camp since there is a parent event at the pickup and some presentations, but this year we decided to have them fly home.

The kids had to leave camp fairly early on Friday and were on the van to leave at 7:45. They had one flight from Asheville to Atlanta, a short layover, and then a second flight to Jacksonville. After a bit of a hassle, I was able to get through security to pick them up and was able to greet them just after they existed the plane. The kids didn't do it all on their own as we had to pay for an "Unaccompanied Minor" minder to help them at the airport and to make sure they got on their flight, but we're proud of them for being grown up about their air travel and happy that they made it home safe and sound from camp.