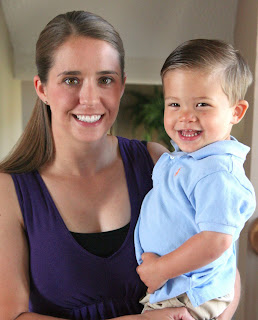 The most exciting news this week is that Connor's going to get to stay home with Mommy two days each week! Mommy cut back her hours a little so she could spend time with her little boy. She's been missing him too much! She's going to take Mondays and Wednesdays off, and Connor is officially part time now at school. We're all very excited about it!

This past weekend was a lot of fun for Connor. Our neighbors had a big barbecue and Connor got to play with his friend Morgan that lives down the street. She and Connor played really well together and would chase each other around the entire time. They had a blast.

Connor also rode on a swing for the first time. In the past he would instantly throw a fit when he was put on a swing. When he saw Morgan having fun on a swing he finally decided it was worth a try. At first he would lose interest, letting go of the swing and plopping into the grass awkwardly. He got the hang of it very quickly and had a great time. 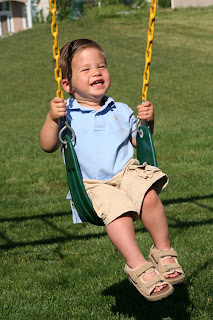 Connor and Morgan playing with the water limbo: 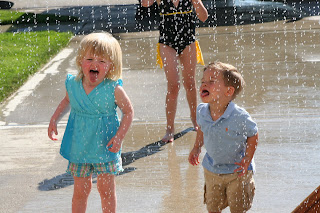 The kids also were driving around in little electric cars. We were a little nervous to let Connor ride in one and Mommy told him to hold on to a little plastic lip on the dashboard of the Barbie Jeep. Connor listened really well and held on to it for the entire ride. We were pretty impressed he listened so well, we just might have to get him a little car soon. 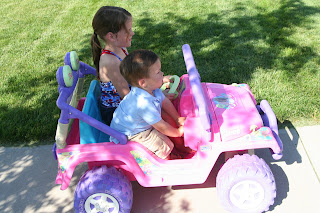 Connor and Morgan in the inflatable bounce room: 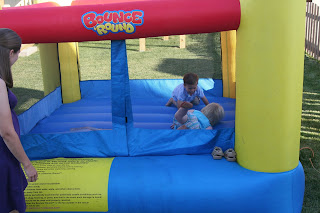 Last but not least, Connor got a new trike to use during "wheels day" at school. On every Thursday the kids bring their wheeled toy to play with outside. We went to get him a big wheel and of course he instantly fell in love with the "Cars" themed one and had to have it. 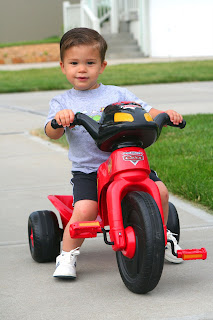 Notice the trucks in the back of the trike, he takes them everywhere with him. 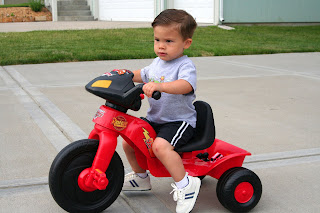