Getting ready to go back in to surgery: 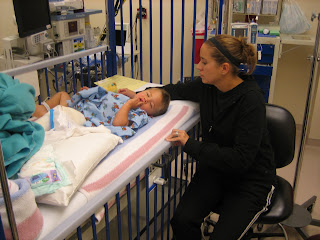 We're currently waiting in the Ronald McDonald room while Connor comes out of anesthesia. No cell phones allowed, so we haven't been able to call anyone. Andrea's parents came up and are waiting with us.

I took a little video of him semi-conscious talking with Daddy about Elmo DVD before we went back to surgery.

I'm glad you've been updating this blog with updates on how Connor's doing. I've been thinking of you 3 today. That had to be scary for all of you.

Hope Connor feels much better soon. Hopefully you all will be able to get some rest tonight.

Awww. The video breaks my heart. Love you guys. This to will pass.
GPV

Awww. The video breaks my heart. Love you guys. This to will pass.
GPV