Made it through the night 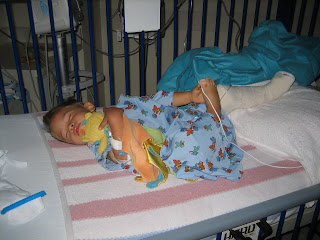 We had a really rough night, but we made it. Connor had a really difficult time falling asleep and his sleep was very fitful even when he did. Every once in a while he'd jerk/spasm and then would start screaming. They upped his pain medication and he's currently on valium, morphine, and roxicet. The nurse said that she'd never seen a toddler with such high tolerance for pain medication. I think my little man's just really in pain.

This morning he didn't like the blanket over him, or the little monitor attached to his right foot's toe. He doesn't like all the tubes on him. Every once in a while he'll start pulling on them. Earlier he was telling Mommy that they were "stuck". Since he pulled the blanket off, I decided to get a few pictures of his current splint before he gets the big cast.

The nurse anesthetist came by earlier and believes that Connor will likely go into the OR's around 10:30. I realized that I wasn't too clear in the previous post. Although they won't be cutting on Connor, they will have to sedate him to put on his huge cast. It's a thirty minute to an hour long process.

Connor's currently watching his favorite DVD - "Elmo in Grouchland". He's fairly content watching his movie and holding his lion and some cars. 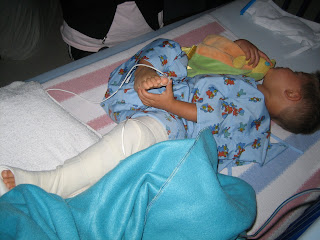 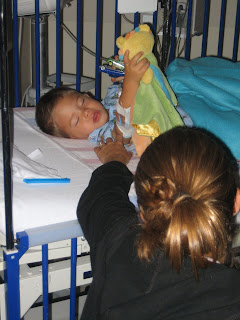 Here's the cute outfit they cut off of him: 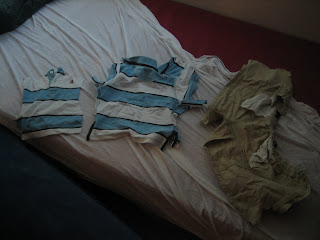 Keep us posted! We're thinking of you guys!!! Bella had to be sedated for her ear tubes and it's scary for the parents but it's really quick and he'll do great! Good luck today!