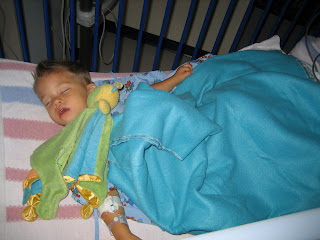 Connor was playing at the playground today and broke his femur. He was coming out of the little tunnel area and when he stood up he slipped and fell. I (Daddy) didn't have a good angle to see exactly what happened, but he may have twisted it around behind himself or hit it on the lip of the tunnel area. By the time I got to him and picked him up, all I could tell was that his legs were twisted around under him in a way that looked uncomfortable, but didn't seem like a big deal. I picked him up really quick and figured he'd stop crying in a minute, but he kept grasping at his legs and screamed like he was in major pain.

After about a minute of holding him, I decided to go home and started to carry him while pushing the stroller and Chloe. I gave up pretty quickly and called Andrea to come get us. By the time she got to us, I'd decided that we were going to the ER. We grabbed a few things, locked up Chloe and went directly to the Children's Mercy ER.

Connor screamed the entire ride and every time we went around a corner, accelerated or hit a bump he'd shriek in pain. It was the most difficult car ride of any of our lives. When we got to the ER, we were worried it would take forever. There were at least fifty people waiting. Connor was the only one that was crying. The triage nurse took a brief look at him and told us it wouldn't be too long, but every minute seemed like an hour. Thankfully we only ended up waiting fifteen minutes.

We went to an assessment room where they took some quick vital signs and then we went back to a room. The ER doctor came in to examine Connor, and although Connor didn't like the doctor touching anything, when the doctor he felt Connor's left leg, Connor screamed the loudest. The doctor started to try and take off Connor's shorts and I told him just to cut them off. The doctor did so, then he taped the leg and did a quick temporary splint of Connor's leg. They gave him some Roxicet oral pain medicine and Daddy held him up against his chest and tried to comfort his little man. Connor calmed down a bit and for the first time in over an hour he stopped crying started to fall asleep. Of course, it was right then that the XRay room was ready and we had to wake him up and take him back. We carried him there and arranged him different ways on the table, which was absolute torture for him. The only words he really said since he fell were in the initial assessment room and in the XRay room and he would say "No No Da Da", which absolutely broke my heart.

We got him done with XRays and back to the ER room fairly soon and some nurses came back and started an IV for some more potent pain meds. They had a really difficult time finding a vein, but Connor didn't even struggle. He cried, but all the poking around in his arm apparently didn't hurt nearly as much as his leg. It was at this point that one of the nurses asked "So how did he break his leg" which wasn't the best way to break the news to us, but I guess there's no perfect way to do that.

We went back to the ER room and eventually the Ortho resident on shift came to see him. He officially informed us that the left femur was fractured and that Connor would need a cast. In the morning he will have to go to an operating room to put on a fairly elaborate cast that will go around his waist and down both legs to lock his bones in place. The ortho doctor re-splinted his leg and after a little while we were transferred to the ortho unit for an overnight stay.

Daddy went home and grabbed some things for Connor and for Mommy and Daddy. Andrea's cousin Lindsey is working tonight here (she's a nurse) and she helped me bring everything up to his room. We're getting ready to try and get a little sleep now. While Daddy was gone, Connor was telling Mommy that he wanted Lion (lion blanket) and also that he wanted to get up and go home "All done Ma Ma. Up! All done..." 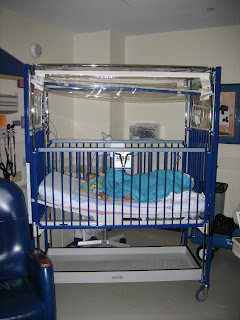 I am so sorry! Andrea I got your message this morning. Goodness I hope everything gets better real soon for you guys. Let us know if we can do anything and when Connor will be well enough for visitors.