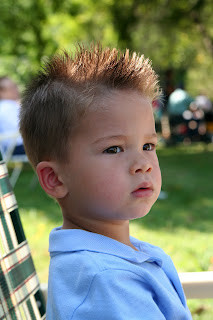 Saturday morning we went to see the Puddle Jumpers parade. Connor loved watching all the trucks, cars, motorcycles and people go by. He really loved seeing the fire trucks and construction equipment, but got pretty scared when a bunch of loud motorcycles drove by. He grabbed onto Aunt Amanda's neck and held on tight for a long time. The rest of the day, and even the next day, he would say "Motorcycles loud" whenever he thought about them. 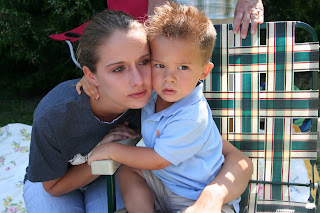 After the parade we walked around for a very short time. It was crazy hot. Connor was wishy-washy about whether he wanted to ride the little train that was set up and thankfully cousin Drew agreed to ride it with him. We probably wouldn't have let him try to ride it alone, there weren't any seatbelts or straps and he probably would have stood up and tried to get off without someone there to stop him. He seemed to like it, then hated it and would reach for us every time the train came near us, and then by the end of the ride he liked it again. 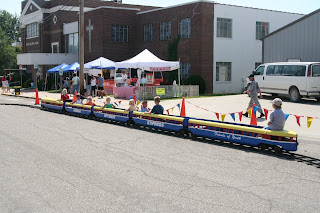 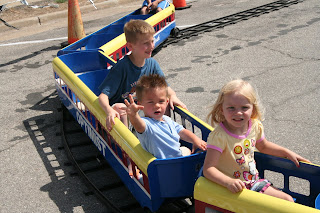 Before we ate lunch, Connor played a little ping pong with Uncle Nate. 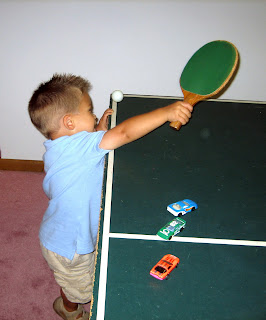 After lunch we tried to put him down for a nap in the crib upstairs at Grammy Genie's house. He's slept up there before, but he's never loved sleeping alone in the room. He threw a huge fit and was trying to climb out of the crib. He kept throwing his right foot up and was able to get his heel over the top of the rail. Daddy decided he'd better put a bunch of pillows down in case Connor got out and it's good we did. Moments after the pillows got set down, Connor threw his leg up again and before Mommy or Daddy could react he managed to hoist himself over the side. He landed on his side, right on the pillows. It scared him half to death and scared Mommy and Daddy almost completely to death. It was a pretty big drop, probably a good 4 feet, but thankfully he landed on pillows and carpet and thankfully didn't land on his head.

After falling out of the crib, he was very angry and upset. We didn't think he would get a nap, but his Aunt Abby decided to try and lie down with him. She settled him down and he ended up falling asleep and he took a nice long nap with her.
Posted by Shawn Vernon at 1:17 PM

The first couple of pictures are priceless.
GPV