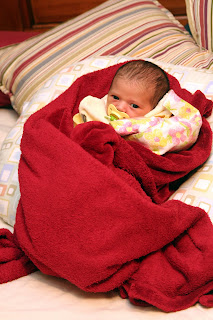 We had Paige's first and second doctor's appointments last week, the second was really just a weight check. She is healthy so far, but a little skinny. She still hadn't gotten back to her birth weight by the second weigh in, so we're supplementing a little with formula to get her weight up. Our next appointment is Tuesday (5-18-2010), hopefully she'll be up to the birth weight by then.

So far she has been doing REALLY well. She is awake a bit, but mostly sleeps. She likes to be bundled up and kept very warm. She typically has a onesie, a sleeper, a baby blanket and then a bigger blanket bundling her up. We don't keep it really cool in the house or anything, she just does best when she's really warm. The doctor said to try and keep her warmer too so she uses her energy to grow rather than stay warm.

Connor with his little sister. 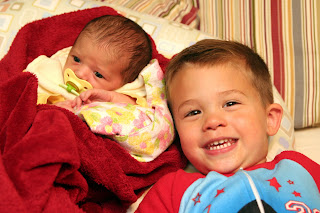 Overall we've had an awesome couple weeks with Paige. She has been very easy to get along with for the most part. A couple nights she cried for a while at night. We've been trying to keep her awake for the few hours before we go to bed and that seems to help some.

She likes to eat, likes to sleep, likes her Nuk (pacifier) and likes to look at lights. She definitely does not like to get her diaper changed or her outfit changed. She is very laid back so far. We took her to McAlister's two times recently and she was so easy. We fed her before we left, put her in the car seat and she slept all the way there, the entire time we ate, and all the way home. We couldn't believe it! Connor would have cried the entire way there (with Mommy in the back seat trying to keep him happy), one of us would have had to stand and rock him and comfort him while the other parent ate, and then he would have fussed and cried the whole way home. We really hope that Paige stays so easy! We're used to difficult babies, but we'd rather not do all that again. 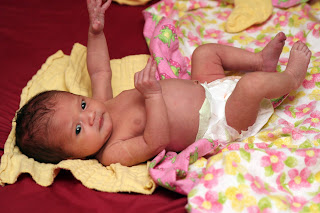 Connor's been a great big brother and has really adjusted well to having a sibling. He is always thinking of her, bringing her little bear blankie to her when she cries, or asking about her if he doesn't see her. He is always interested and helpful when she has a dirty diaper. Until her umbilical cord came off he would always be very concerned with the "poopie" on her tummy. He's been a great help and a great big brother. 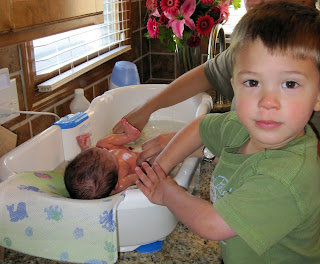 Mommy and Daddy are doing really well too. We've been working hard to make sure that we're both well rested. We typically will switch off nights getting up with Paige so one of us can sleep uninterrupted. With Connor we'd both have to get up every feeding so Mommy could pump and Daddy could feed the previously pumped milk with a bottle. Mommy has been doing awesome with breast feeding and we haven't had to do the pumping routine much yet.

Daddy has to go back to work tomorrow and we're all very disappointed that we won't get to all be together like we have been. We've all gotten closer being together so much and would be very happy to never work again. Some people would probably get bored or would be at each others' throats after being around each other so much, but we've really enjoyed it and have cherished these weeks together.

Let's hope everything continues so well! We love our little family!
Posted by Shawn Vernon at 1:25 PM