Connor and his blue leg 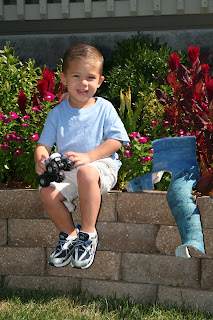 It was a year ago now that Connor fell at the playground, broke his femur, and had to wear a Spica cast for six weeks. He's recovered completely from the break and you'd never know that he'd ever had a problem with his leg. We don't think he has a very clear recollection of what happened, but he does remember that he had a "blue leg" at one point. Whenever we're playing with his toys and someone gets hurt, they usually "go to the hospital and get a blue leg" as he puts it.

He was actually pretty frightened of the blue leg when Daddy got it out for the picture, I think he was worried we'd put it on him. 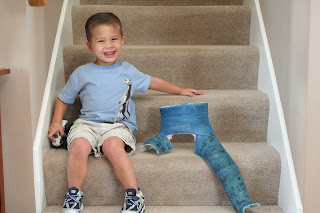