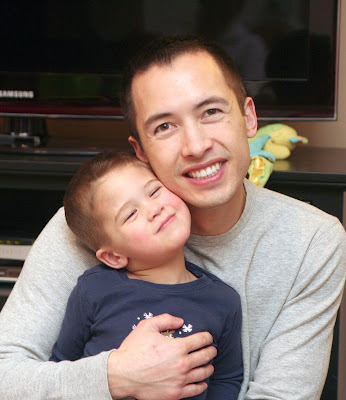 Connor's got a few games that are his favorites recently. He likes to play rough and loves football and wrestling. Both are fairly exhausting, but not compared to his new favorite game "Race". Race typically consists of Connor determining a route and then running between the two points until you get tired of the game. This past weekend when Paige was taking a nap, Daddy decided that he would see just how long Connor would be willing to race.

Connor decided that we needed to run back and forth between the front door and the back door and we started along. Daddy kept count of each lap (one time across the house) and was pretty impressed that Connor just didn't seem to wear out. We did 185 laps before we finished the game, and mostly finished because Paige eventually woke up. Connor was pretty tired, but probably would have kept racing if he'd been asked.

Later, Daddy measured the distance and it was 26 feet for one lap. We ended up running 9/10ths of a mile! Not bad Connor!
Posted by Shawn Vernon at 4:02 PM