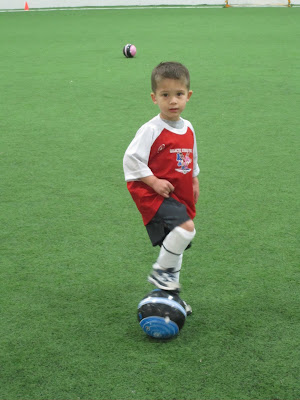 Connor's been doing really well with his soccer drills and we wanted to give him a chance to play some games. Coach Shawn, who does the Dinomites with the little kids, has an indoor group called the Galactic Strikers. The Strikers are mostly older kids in the 5-6 year range that play games. They don't keep score or have an official goal keeper, but it's a lot more advanced than Dinomites.

Connor was pretty intimidated when he showed up and for a few minutes we didn't think he'd cooperate. We think that due to his comfort level with Coach Shawn, he warmed up and got out and played. In Connor's group, there were 10 kids that got split in to 2 teams. For the first three quarters it was three on three with two kids sitting out at a time for each team. For the last quarter, all the kids came out to play at once.

Connor did really well for his first time. He didn't make any goals and typically ran around the periphery of the action, but considering that it was his first time playing in a realistic game and considering that all the other kids were older and bigger than him, he did great. We were very proud of him for getting out there and trying hard and he did a great job running fast and kicking the ball when it came close. He always knew which way to go to, which goal was his goal, and which goal to shoot for.

He's got practice on Wednesdays and games on Sundays and we're also going to continue doing the Dinomites. Coach Shawn said that the biggest reason that kids end up quitting soccer is because of pressure to perform well. Our biggest hope is that Connor just enjoys playing the game and has fun.

Great picture of Connor and the soccer ball!
GPV