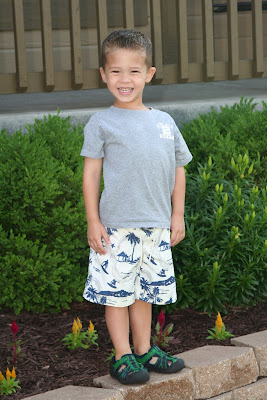 Today was Connor's first day at the Oakhill Day School Summer Camp. It's all day on Monday, Wednesday and Friday and includes classroom time, play time, swimming lessons and all kinds of fun. Connor's buddy Logan's been in summer school lately, and Connor was already getting a little restless and mentioned that he wanted to go to school, so Mommy was sweet enough to plan some fun summer activities for our little man.

The swimming lessons were first thing in the morning, so we got Connor dressed for the day in his swim trunks and sandals. Mommy stuffed his backpack full of gear, clothes, and his lunch. She decided to also include a special treat in his lunch, 3 chocolate chip cookies! We took a quick pic of him before he left for the day.

Mommy drove him to the school and on the way she coached him on having a good attitude and trying to be friendly. Connor said "Mommy, I not be shy". Mommy dropped him off without any fuss, and then we wondered all day how he was doing.

When I went to pick him up, I stopped in to ask his teacher Mrs. Ralph how he did. She told me that Connor did wonderfully and was very good, wasn't sad, played well and was a good listener. I asked for more details and she said that Connor had done some painting, coloring, played with a bunch of toys and was a little shy and quiet. That sounded about right.

I took a quick picture of Connor in the classroom before we left. 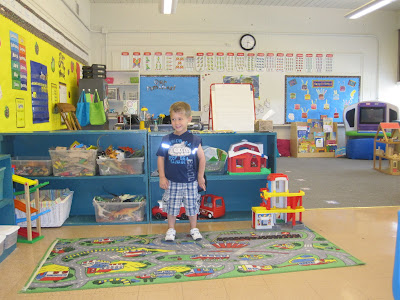 On the way home I asked Connor if he liked summer camp and he said he did. I asked what he did and he said "Nothing". I asked if he played with any of the kids and he said he didn't because nobody likes him. Connor said that he thought they were all 2 years old and he is 4, so that's why they didn't play with him. We talked about how he had to be nice and try to play with the other kids so they'd play with him. I know it was a big accomplishment for him to be so positive and have a good attitude in a strange place with strange people all day. He did great, all things considered. I asked if he had fun swimming and he said he was afraid that he'd sink under water, but it wasn't too deep, just medium.

When we got home, Mommy unpacked his backpack and saw that Connor hadn't eaten any of his cookies. She asked him why he didn't and he said "Because I almost eat all my food". It took us a minute and then we realized that he knew he needed to eat all his healthy food before his treats and since he hadn't finished everything else, he didn't eat the cookies. We were a little amazed by that, but that's Connor! If any child would be so responsible, we knew it would be our Bubba Brown. 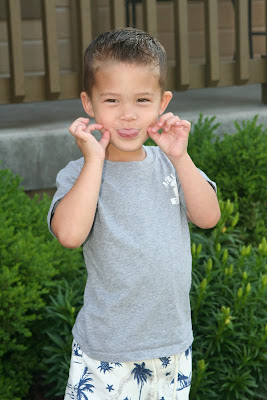