On Friday, we went over to Great Grandpa and Grandma's house for a quick visit and lunch. We went to Uno's for lunch and had some delicious food that we've been missing since the Uno's near our house closed. 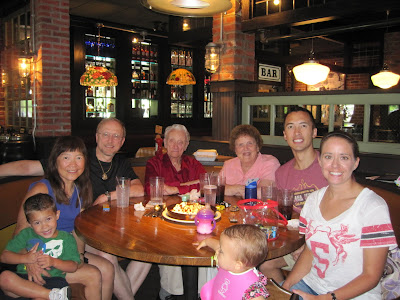 Connor and Paige had fun playing with the Greats, and we got this nice picture of them together. 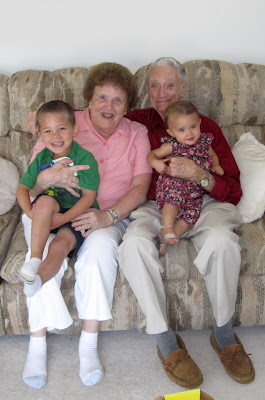 After lunch, we went back to the hotel so Daddy could work, Paige could nap and Connor could swim for a little while. Later that afternoon, we went over to Sharon's house for a BBQ. 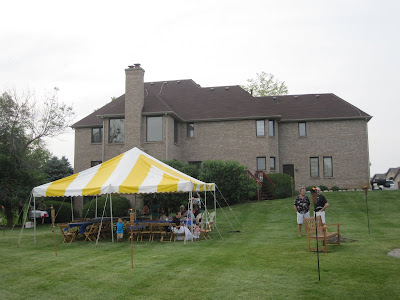 Sharon had a tent set up and a great space to play. Connor played soccer, baseball (with a tennis racket), and tag with Grandma Alice. He also made friends with Niko, the ringbearer and the nephew of Jeremy (the groom).

Paige had fun visiting with everyone. She wanted to run and play too, but there was a bit of a hill and she had trouble running around much. She was happy to be held quite a bit. 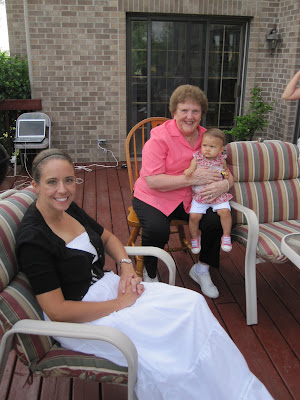 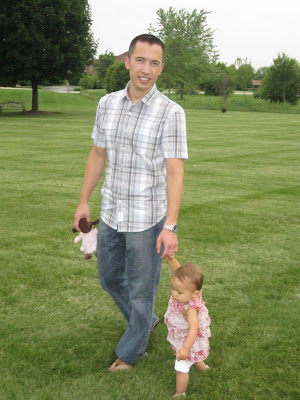 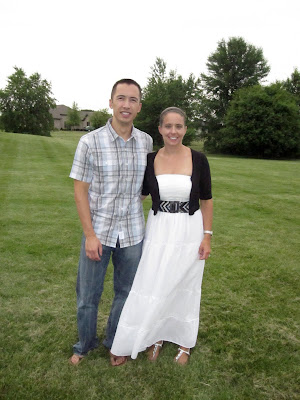 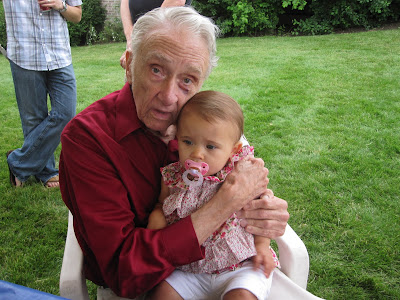 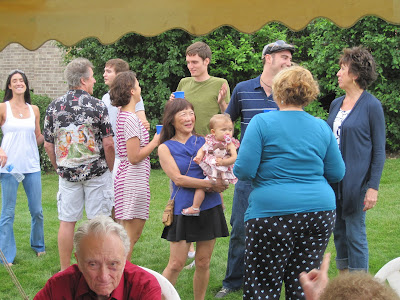 We didn't stay too long since the kids don't sleep in much, and since we had a big day the next day. On Saturday, we got up around the time we usually do and then went to Burnt Toast for breakfast. Connor got a huge Mickey pancake and ate an unbelievable portion for such a little guy.

We got a few pictures since they were in such good moods. 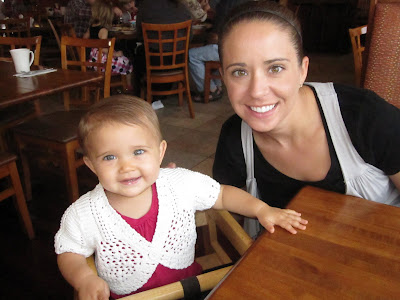 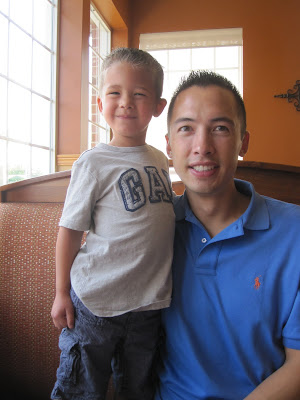 After breakfast we went to the mall to get Connor some different shoes. We'd intended for him to wear some sandals with the strap that goes between the toes, but Connor had been unable to deal with that strap. He freaked out and shrieked the entire time he wore them. We wandered the mall for a couple hours but struck out on finding any shoes that would work.

After the mall, we went back to the hotel so Daddy and Connor could swim while the girls napped. A couple hours before the wedding was due to start, we started getting dressed and Daddy had a horrible realization. Without paying much attention, I'd grabbed a white shirt from the closet and a couple ties. I hadn't realized that the shirt was a full 2 sizes too large. It was a shirt I'd purchased when I'd weighed about 25 pounds more than I do now and it was absolutely enormous on me. From our visit to the mall, we remembered there was a Men's Warehouse right inside the entrance and we drove there for an emergency stop. Thankfully they had a few shirts there and were willing to iron them on short notice. Once the shirt was on Daddy, we drove to the wedding and made it with just a few minutes to spare!
Posted by Shawn Vernon at 6:29 PM