This past week I had PRK (Photorefractive keratectomy) surgery. It's similar to LASIK, but with some differences. Wikipedia compares them this way: LASIK is associated with decreased inflammation and quicker recovery, but at the cost of decreased expression of Nerve Growth Factor (NGF) at the surgical bed. PRK, on the other hand, has longer recovery time with more postoperative discomfort and irritation, but rates of ocular dryness are less, as only the epithelium is denuded in this approach. LASIK, on the other hand, involves creation of a corneal flap.

So, there are some advantages and disadvantages to PRK over LASIK. To me it was a decision between a fast recovery time with LASIK and a better long term outcome with PRK at the expense of short term "discomfort". I thought it sounded like PRK was worth the effort as the "corneal flap" always made me uncomfortable since it never really heals.

I've been wearing glasses since 5th grade and since I was in middle school, I've been wearing contacts pretty regularly. My prescription in both eyes was a -3.5 for the last decade at least. Little to no change as long as I can remember. My eyes lately have been getting red if I wear contacts while working on the computer all day, and I've been experiencing a little more discomfort. I had two eye doctors recommend that I no longer wear contacts due to the irritation in my eyes, however I will always wonder if they just were telling me that since they followed it up with a pitch for LASIK or PRK.

In the end, I did some research on local doctors and found one that had fairly good reviews online,  has been featured on the local news and I'd heard him speak on the local NPR station. Andrea and I both have been considering doing corrective eye surgery and both consulted with him. We decided I'd go first and depending on my experience Andrea would have surgery later in the year.

I had a couple appointments where they took measurements of my eyes and on Friday morning (July 12th, 2013) Andrea and I went to the doctor for the surgery.

I put on a hairnet and some shoe covers before going in to the surgery room. 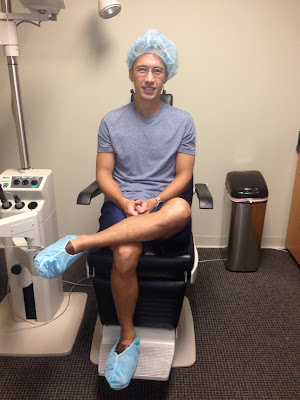 They also gave me some numbing drops that turned my eyes red and hurt. 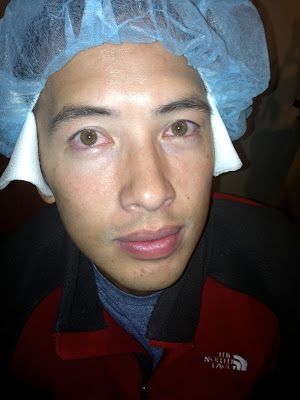 Next came the fun surgery. I was expecting it to be uncomfortable, and it was worse than my expectations. Having your eyelids pried apart by metal instruments is not pleasant and before they blasted my eyes with the lasers, the doctor scraped my eyeballs vigorously with some kind of a tool. It wasn't exactly painful at this point, but it was extremely uncomfortable. All of my instincts demanded that I shut my eyes, turn my head, look away, and fight him off. Instead, I had to force myself to sit still.

As it was shooting me, the doctor and technicians told me I was doing great and sit still. With each BAP, I could see my vision changing slightly and with the last few BAPs my vision got clouded. Then, it was over and they pulled me out and put eye drops in my eye. I was happy the right eye was done, but it was almost worse now knowing what was coming for my left eye. For my left eye, as he was scraping it and sticking it, apparently I kept looking up and he scolded me at least two or three times for it. I was trying hard to sit still, but my right eye was hurting and all of my animal instincts were hard to suppress. Andrea watched me through a glass window and said she could see my hands clenching and toes curling throughout the procedure.

When we were done I wasn't really in any pain although my vision was definitely not much improved if at all. When he sat me up, he pointed to a clock and told me that it was 4:00. I just said "uh huh", then looked at the clock and realized he wanted me to contradict him. The clock was across the room and blurry and after squinting a moment I was able to tell him it was actually 9:45 or something. I think he was expecting me to sit up and be more impressed with the immediate results, but I wasn't too thrilled yet and was still in a little shock from the procedure.

When we left, I realized I hadn't brought sunglasses and they gave me a pair to wear home. Andrea and I went to Cafe Genovese for lunch and I kept my eyes closed almost the entire time we drove there, ate, and then went home. She snapped a pic of me at lunch. 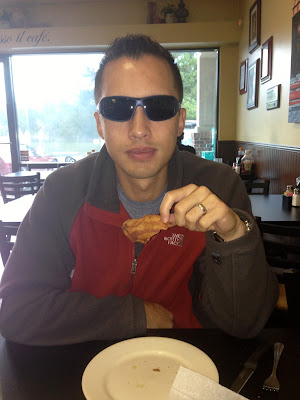 After that came the painful weekend. I had been expecting some discomfort following the procedure and fully intended to follow the doctor's instructions and "take it easy". I thought that "taking it easy" would entail relaxing in a dark room and maybe watching a little TV occasionally or reading. Instead, my eyes burned and hurt so badly that I had little choice but to lie in the bed in pain. The doctor said my eyes seemed pretty sensitive during the procedure and I believe I had more pain than average. Perhaps I am just a pansy, but it was flat out pain for me, not "discomfort" as advertised.

I hardly opened my eyes all day Friday, Saturday or Sunday. When I did, they would water like crazy and would hurt badly. The pain was only a 4-6 on a 1-10 scale, however it was so constant that it nearly drove me crazy. There was nothing I could do to escape it. No way I could sit to be comfortable. I lay in bed and listened to hours and hours and hours of podcasts. I tried to interact with the kids a little to help Andrea out, but the most "help" I could offer was to tell the kids stories before bed. They weren't good stories either since I could barely concentrate.

I did go out to eat one day with Andrea and the kids. Paige put stickers on her eyes to be like Daddy and Andrea took our pic. 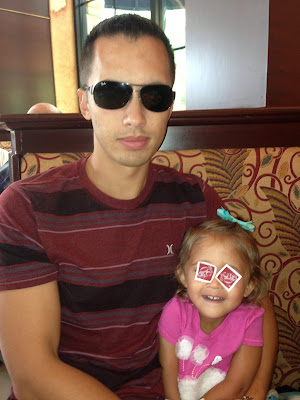 By the time Sunday night rolled around I was ready to claw out my eyes. I was resigned to being in horrible pain until my follow up appointment on Wednesday. After the procedure, the doctor put "bandage contacts" on my eyes and I was suspecting that they had been causing some of the pain. I anticipated I would be in pain until they came out. On Monday morning I woke up and was relieved to realize my eyes didn't hurt. I wasn't able to work at all Monday and Tuesday, but I was at least able to think and keep my eyes open. My vision wasn't good, but I could at least see a little bit.

On Wednesday I had my follow up appointment and the doctor took out the bandage contacts. He said I was healing nicely and to continue to take it easy. It has burned a little more since then to put in my eye drops, but I haven't really had any dryness or discomfort. My vision is getting better each day. At times I can see perfectly, then it gets blurry for a while, then I can see better, then it's blurry. It's a little bit of a rollercoaster, but it's improving.

My eyes feel a lot better. They aren't red or painful and it's amazing how thankful you can be for something so simple as pain-free eyeballs.

I am in my office typing this and decided to post one last pic of me right now with my new and improved laser eyes. Hopefully they continue to improve and my eyes will stay good for a while. It's supposed to take up to a month for the eyes to heal and adjust completely.

Thanks for the HONEST review. I had a LASIK consult earlier this year and was told I was not a candidate and PRK is my only option. Since the recovery was so much longer, I decided to put it off until next year. I can't wear contacts due to eye allergies, so I am worried about my reaction too. Keep me posted about your progress! Hopefully you're happy with it in the end! -Lindsay