Tonsillectomy and adenoidectomy for Paige 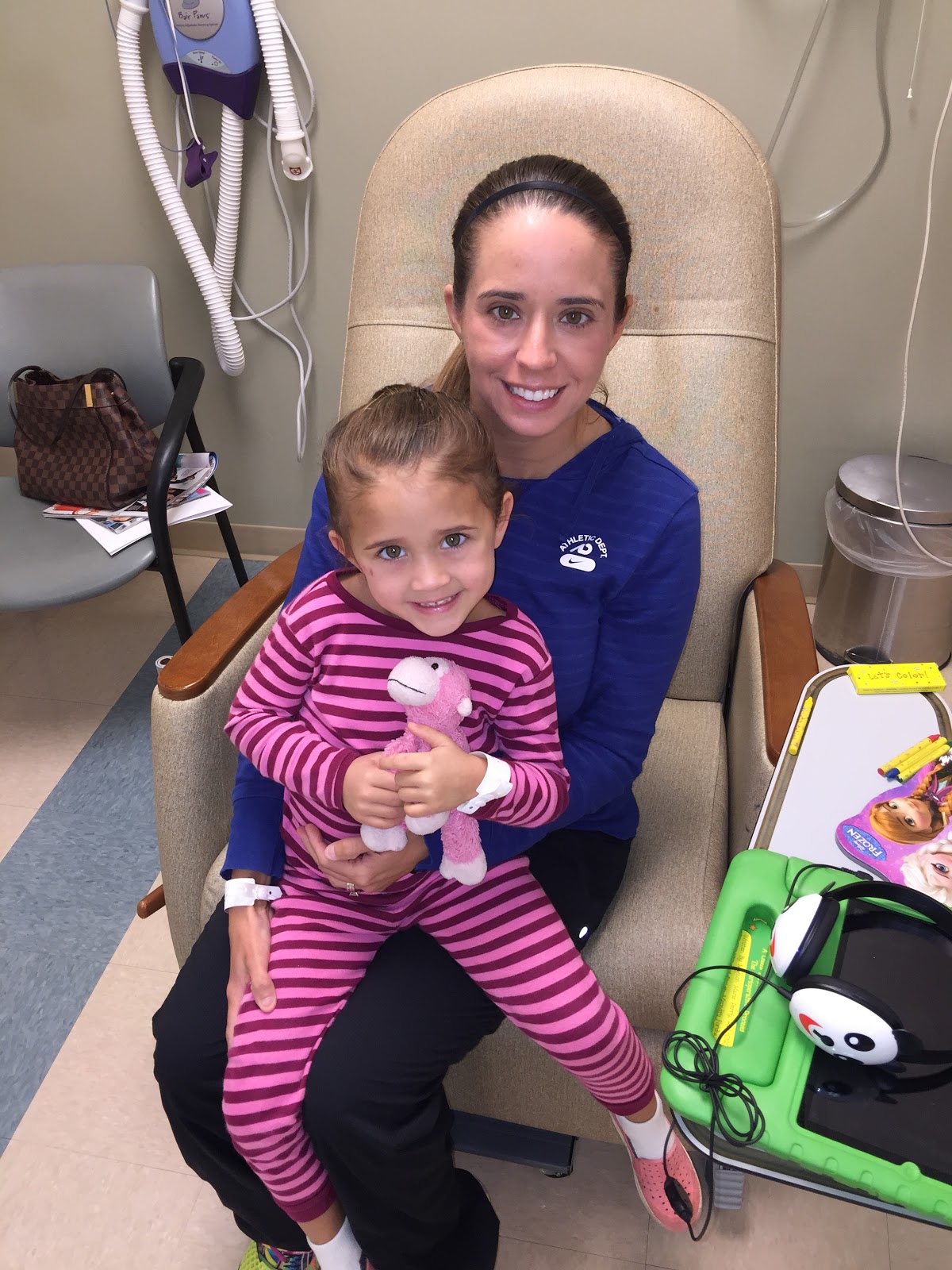 On Monday this week, Paige had a tonsillectomy and adenoidectomy. She's been plagued with throat infections including strep throat for years. For a couple years now we've been consulting with an ENT and although he was initially conservative with his approach, the number of infections lead us all to decide that it was time to try surgery to solve the problem. It was a tough decision, and we knew it was going to be painful and very difficult with Paige to get through the recovery.

Early Monday morning, babysitter Jessie came to the house to get Connor ready for school, then the rest of us drove to the Jacksonville Surgery Center for the surgery. Paige was the first of the day, so we didn't have to wait long. 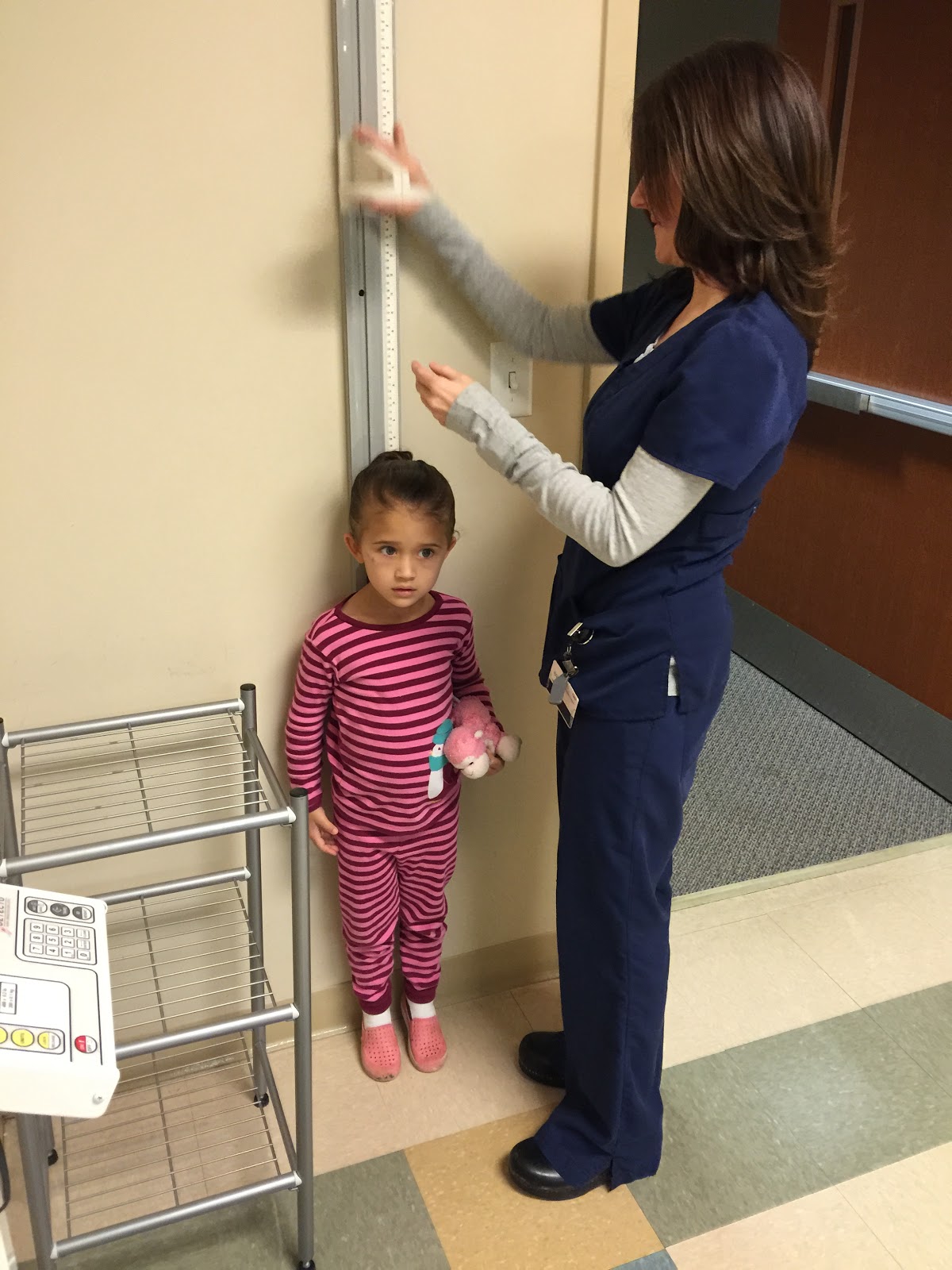 They took some measurements and then we waited as they prepped the room for surgery. Paige was in pretty good spirits, but she was pretty nervous. She reluctantly went with the anesthesiologist back to the surgery room and we kissed her goodbye. 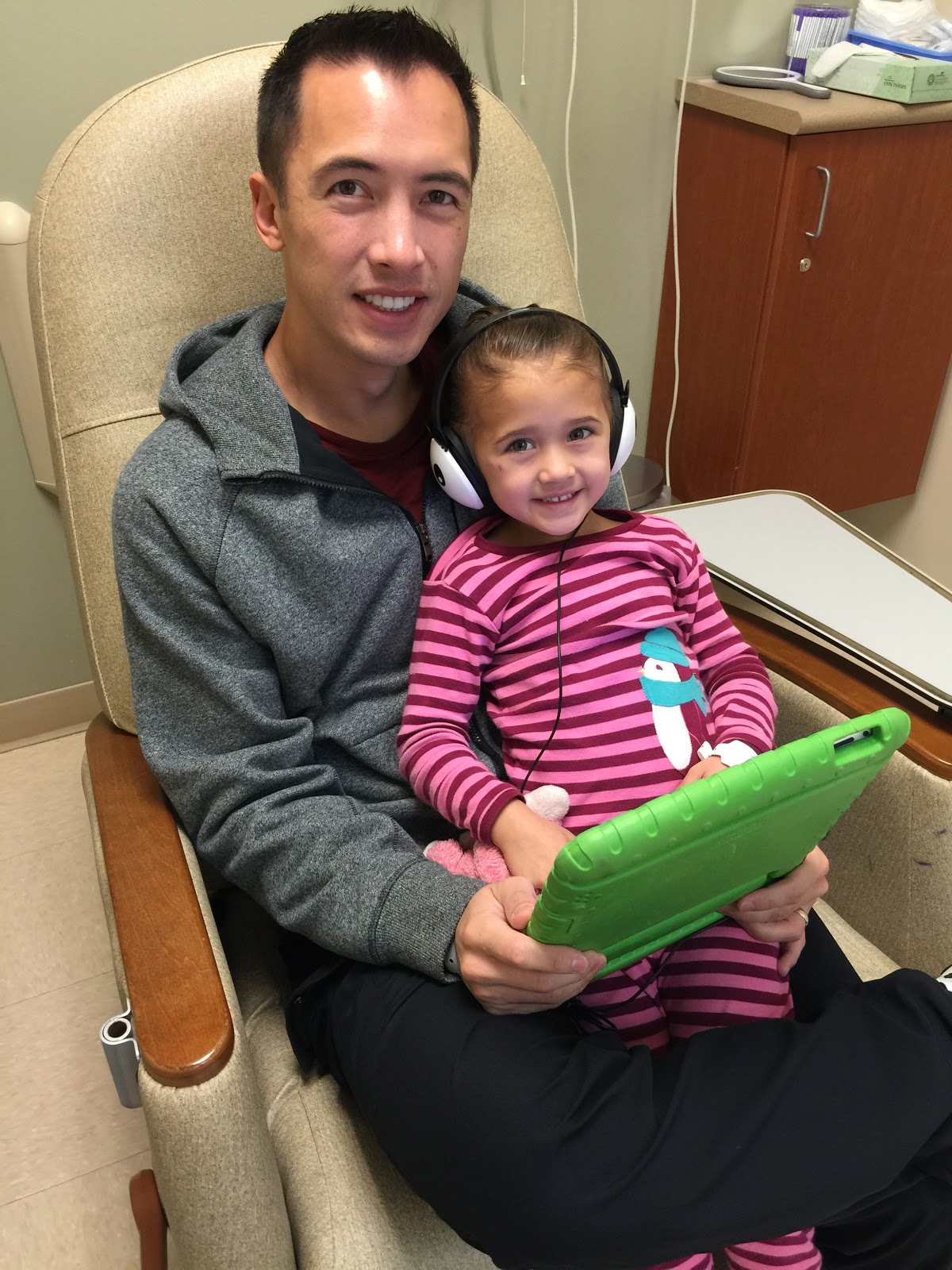 The surgery went pretty quickly. Dr. Sandler came out to the waiting room after surgery and reported that it went well, and that the tonsils were large and swollen. He hadn't been sure if he would do it, but during the surgery he decided to also take out the adenoids. After surgery, Paige was very upset in the recovery room. She cuddled Mommy for a long time. We needed to get some of her oral medicine down, and it was a big struggle. The nurses tried tricking her and coaxing her, but Paige was very stubborn and pretty delirious. 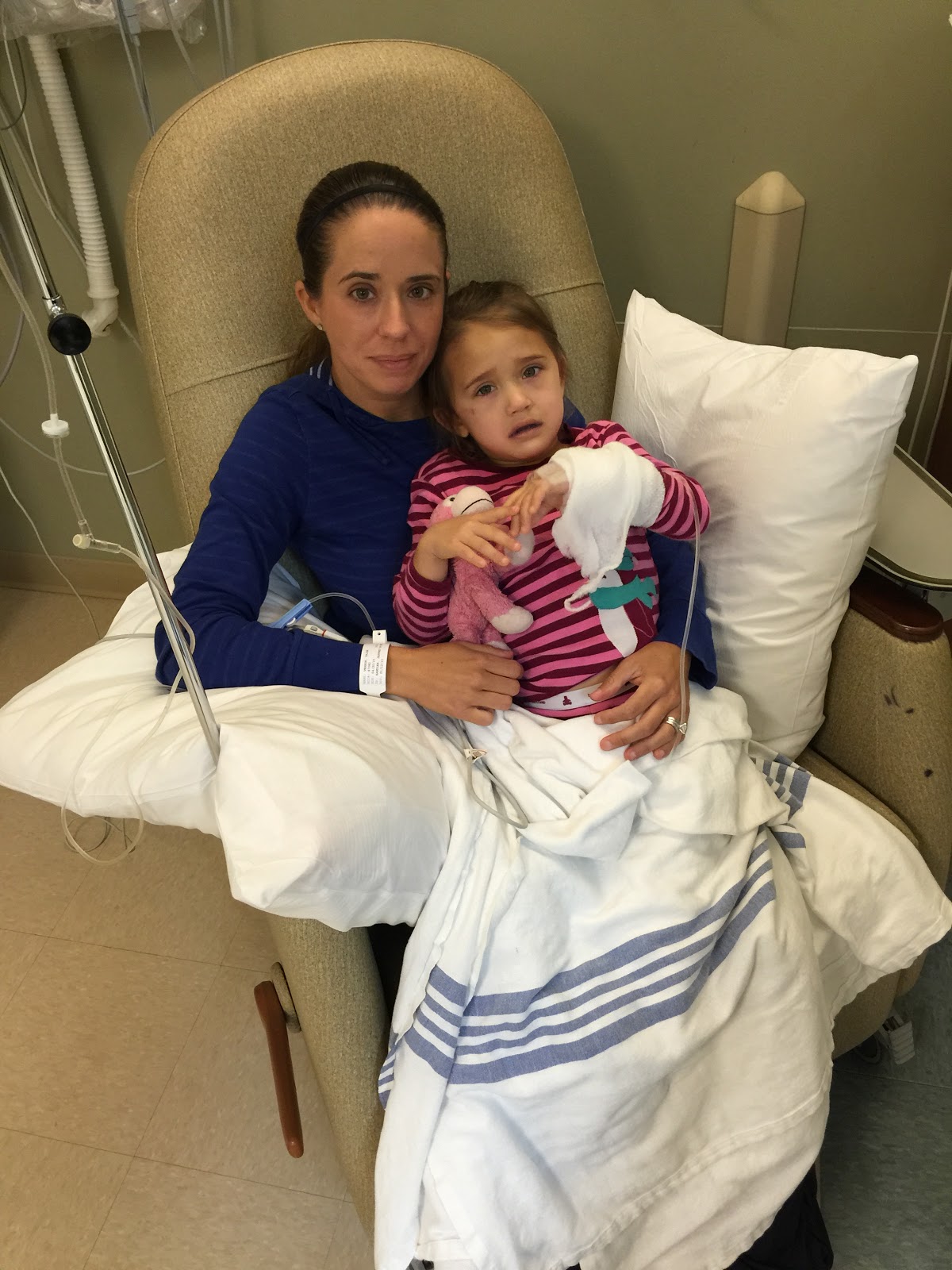 Mommy eventually got her to take the medicine with some ice popsicle mixed in. We waited for some IV fluids to get in her, then we drove home.

When we got home, Paige fell asleep on the couch. 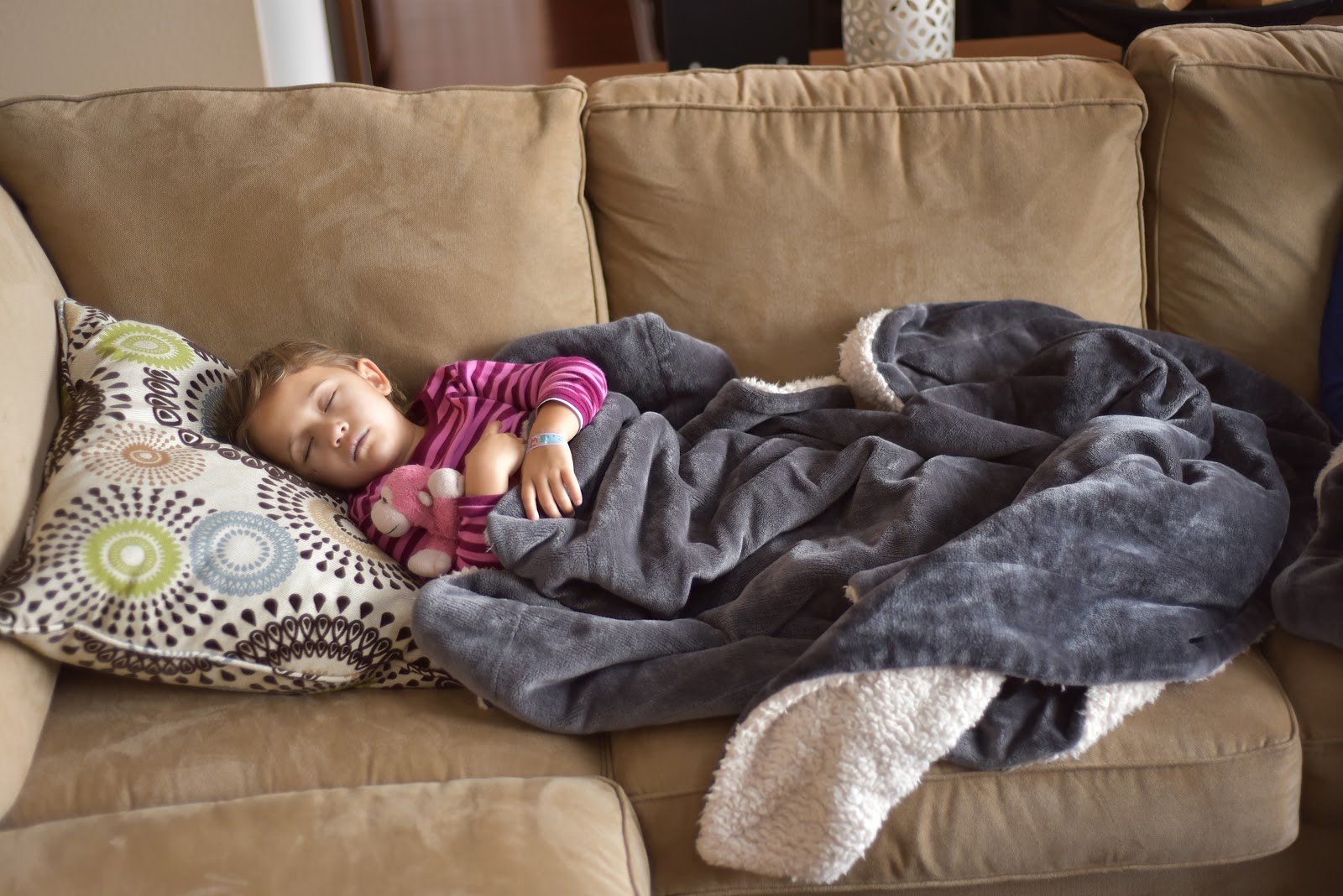 The rest of the day, Paige was pretty mopey and tired. She didn't want to do much of anything.

The day of the surgery I had a short interview with Paige to see what she remembered. 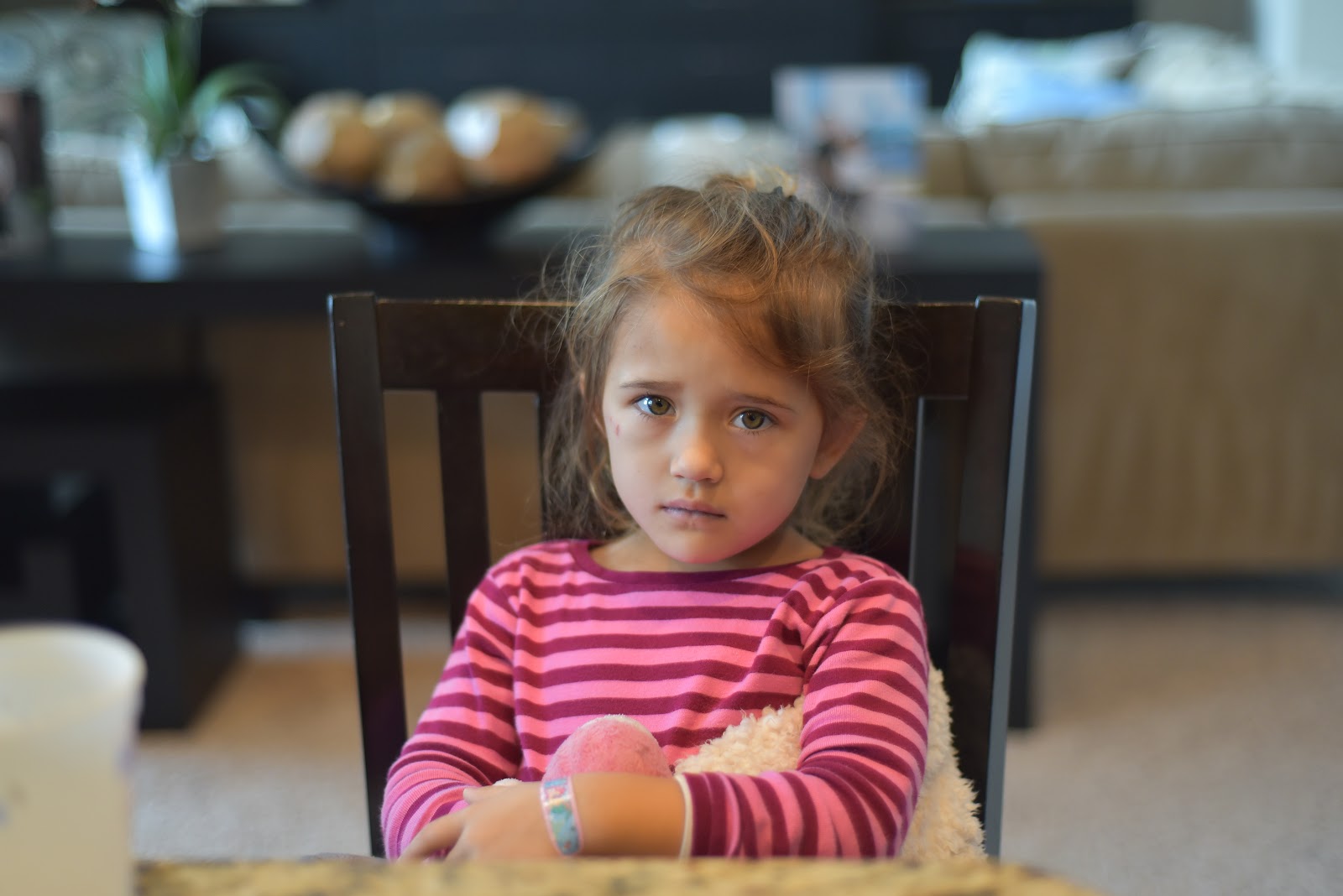 Right away, the medicine became a big issue. We had to give the pain medicine to her every 5 hours and had to give her the antibiotics twice per day. Every time it was medicine time, she'd get worked up, cover her mouth and would cry for upwards of 30-45 minutes before finally giving in. It was a big struggle at first and it wasn't really until day 3 that she started to take the medicine without first making everyone upset. We talked about it a lot, but she would just get so emotional she'd shut down and would refuse the medicine. Eventually she realized the arguing didn't change the fact that she was going to take the medicine and we were able to do it without the drama.

Paige read books, played with her toys, and watched iPad during the recovery The first day home, Paige wanted to color, but didn't have the energy to do it herself so she just directed Andrea on what to do to make the picture perfect. 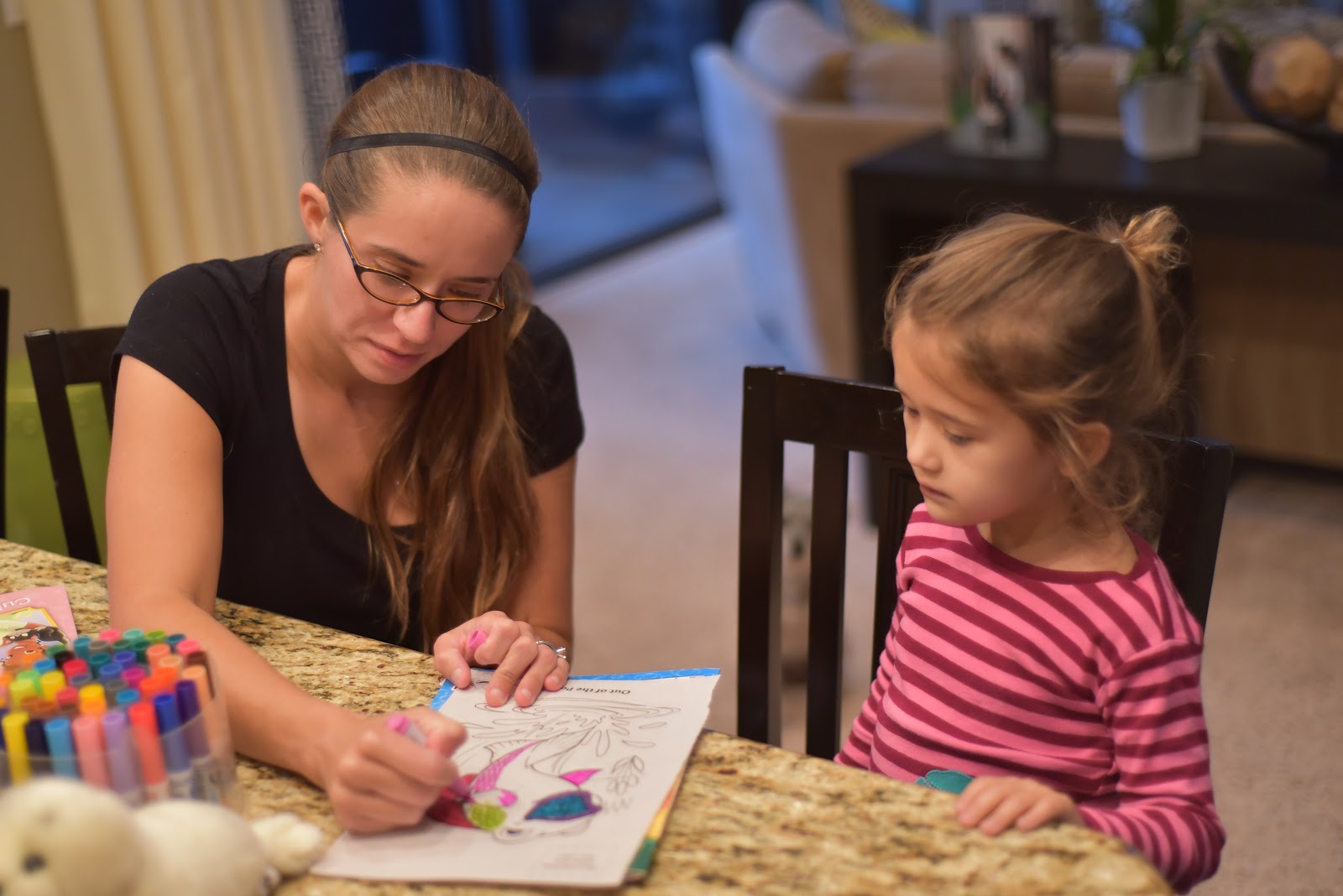 Throughout the week, Paige spent most of her time relaxing and recuperating. She hardly ate anything at all the first few days. It was mostly popsicles and water. Andrea spent most of the week with her, tending to her, and doing most of the medicine. Andrea was able to get out of the house for her tennis matches this week, and while I was home with Paige I had to get work done but I wanted to keep an eye on her too. I setup a little spot in the office with cushions and Paige liked hanging out with Chloe and with me. 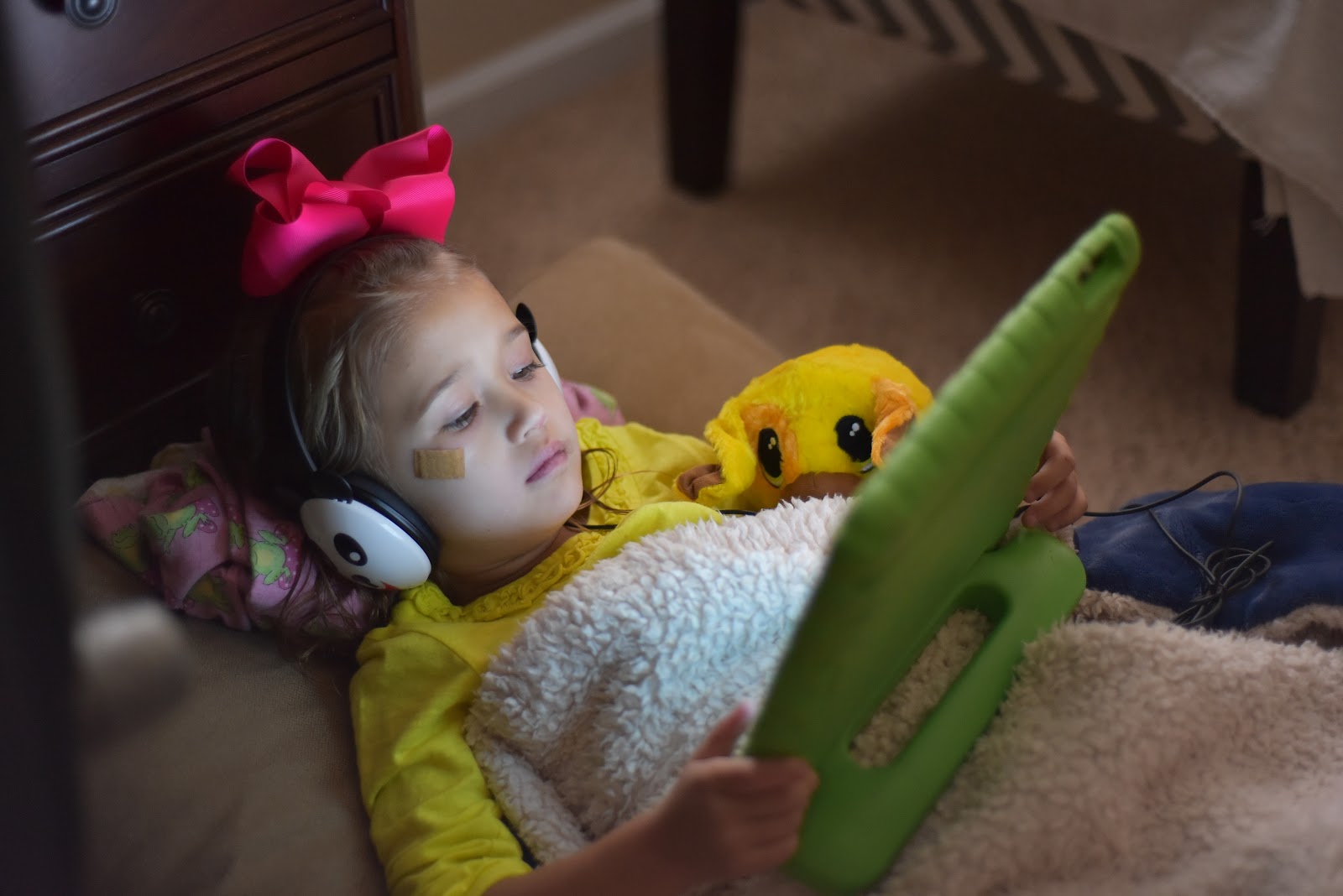 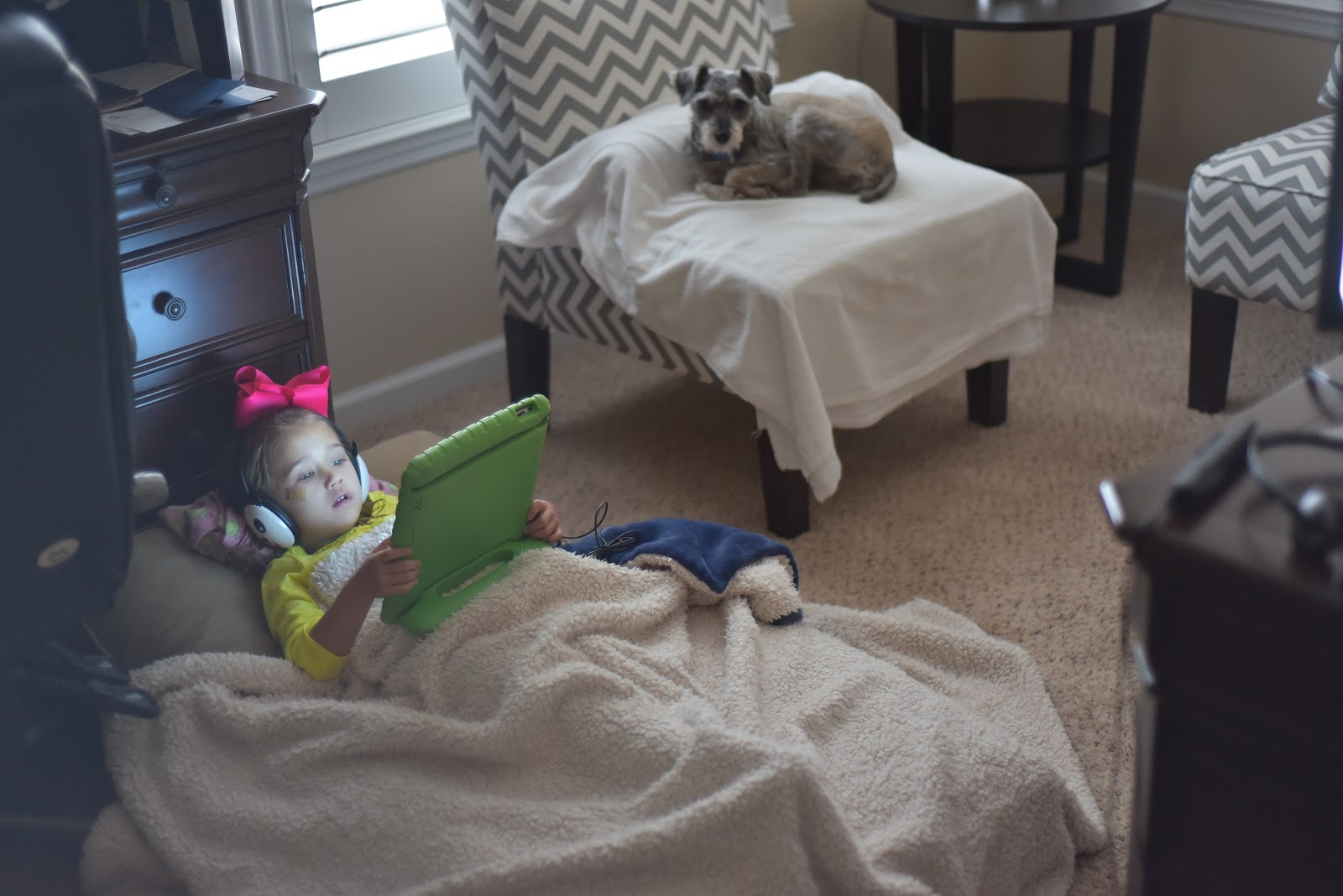 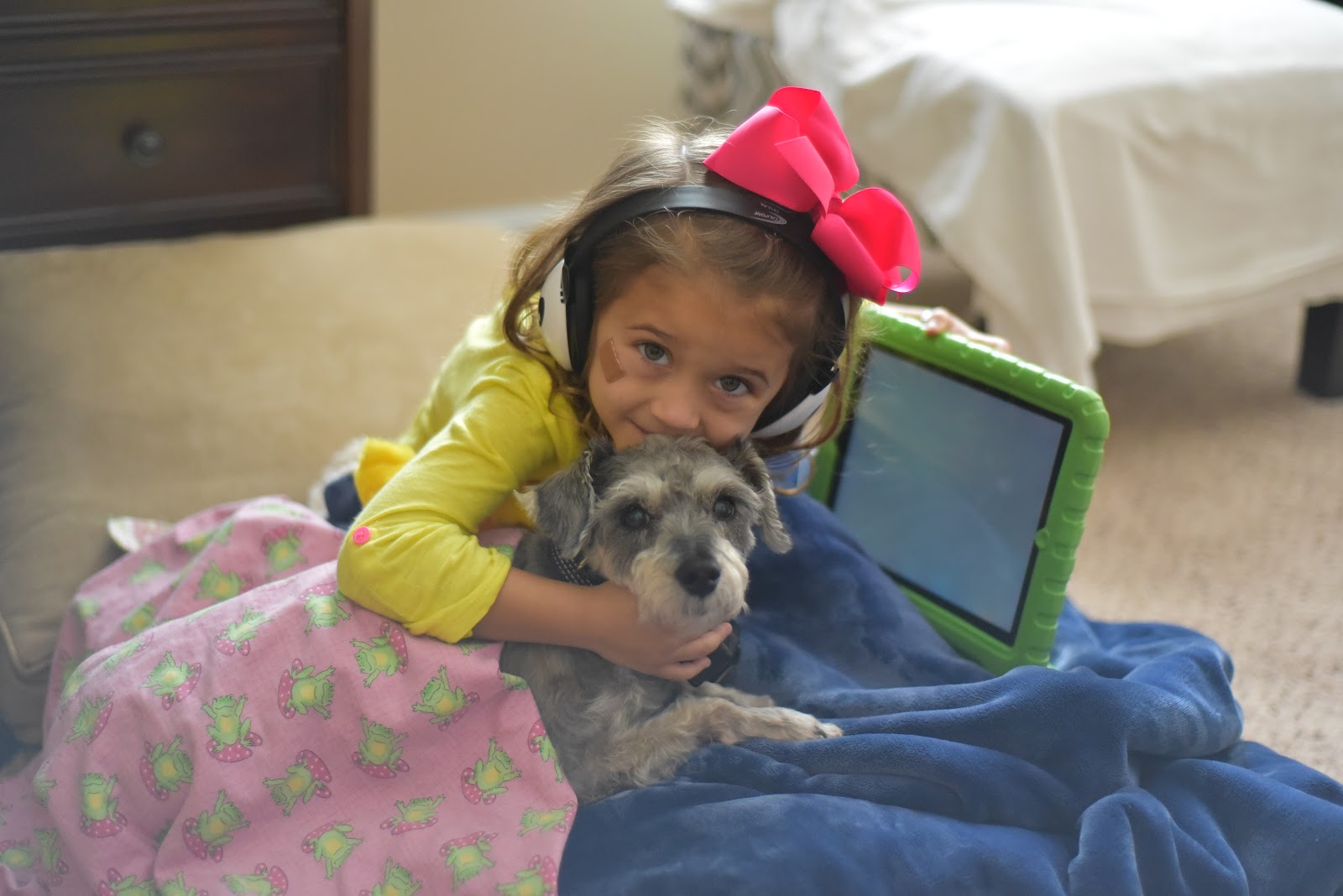 We had a sticker chart, and every time Paige took her medicine she could put a sticker on the chart. When she filled it up, we would give her a special gift. Her favorite gift so far was a new fancy Cinderella dress with a headband and gloves. I took a few pics of her out front modeling it. 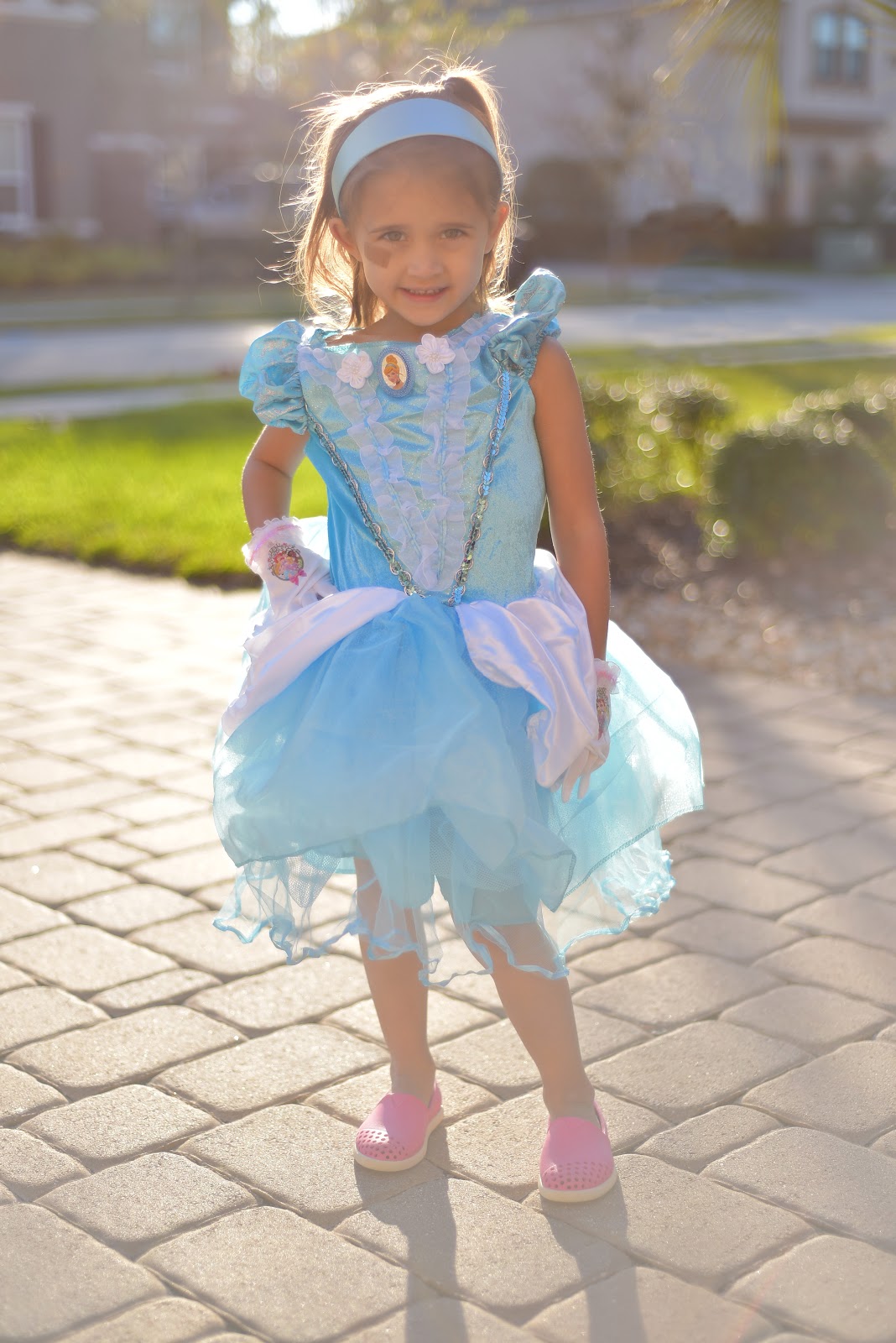 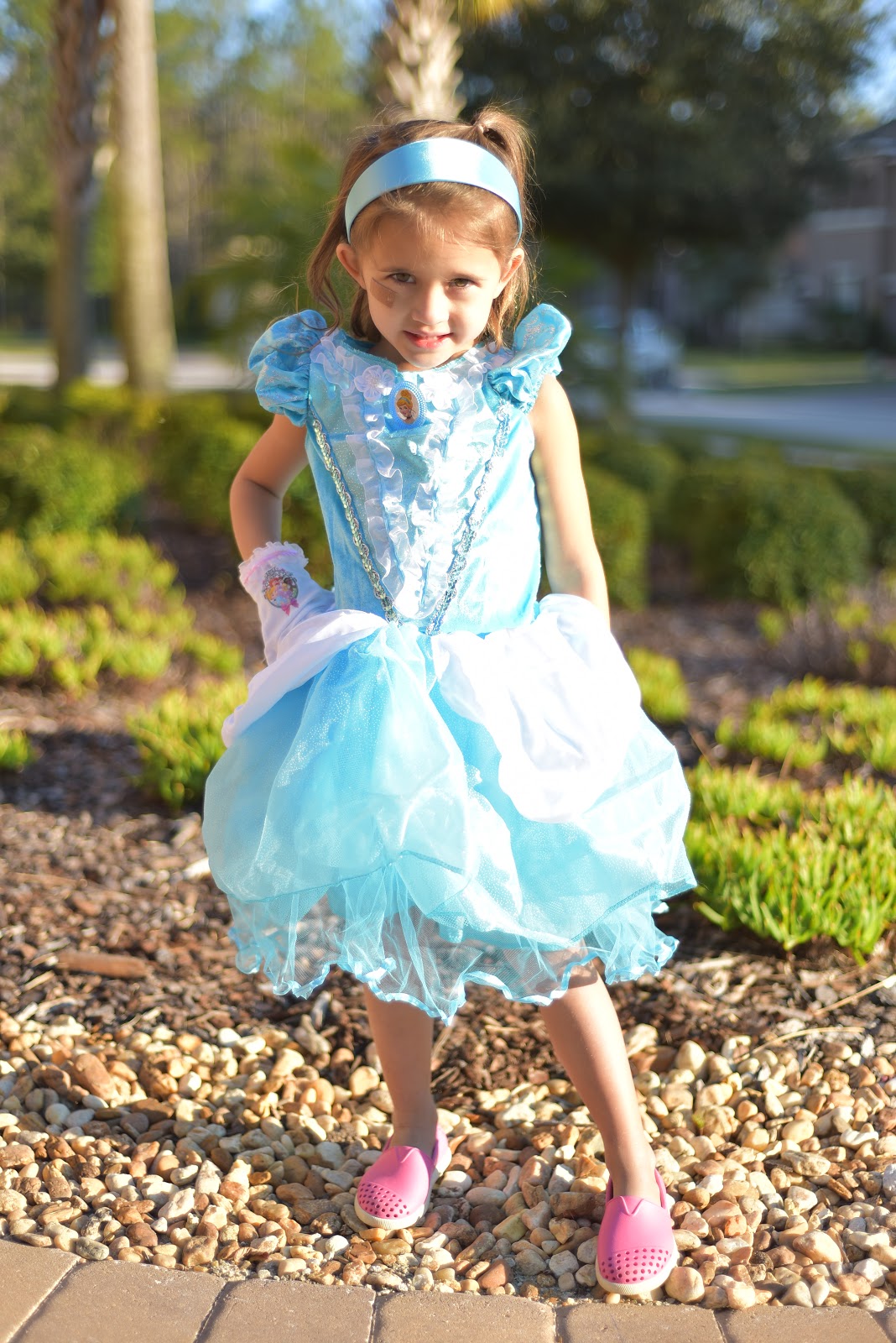 The hardest part of the week was definitely staying up on the medicine. We've been setting alarms at night to wake us up and give her the medicine on schedule. After about 4-5 hours, Paige will start to really get in pain. At night, she'll wake us up sometimes before our alarms even go off because she's hurting so bad.

This morning we took our last dose of antibiotics. 13 doses in all for the antibiotics, and we still have a lot of pain medicine to go. Paige has gotten pretty good about the whole process, but it's still a time-consuming ordeal every time. 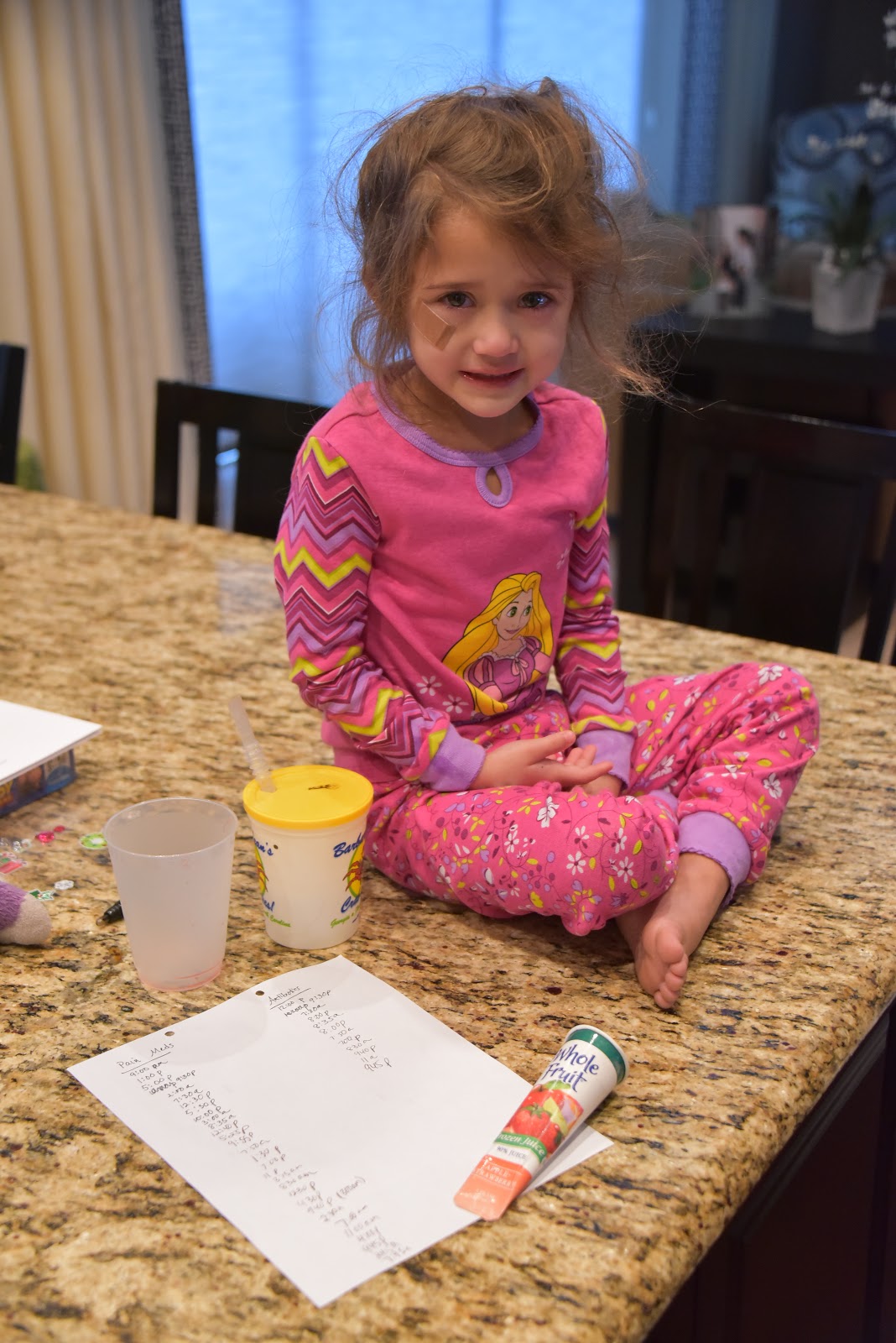 Our neighbor Rachael brought over some organic fruity popsicles made with fruit juice. Paige really likes the strawberry flavored popsicles the best. In the last couple days she's been eating more regular food and had a little pizza last night (Andrea cut it in to very small bites).

This first week of recovery is mostly done at this point. It was harder than we expected, but we have persevered and have been a good team. We're very thankful that Paige has been doing as well as she has. We're hopeful that it will all be worth it and Paige won't get sick like she used to!
Posted by Shawn Vernon at 9:05 AM