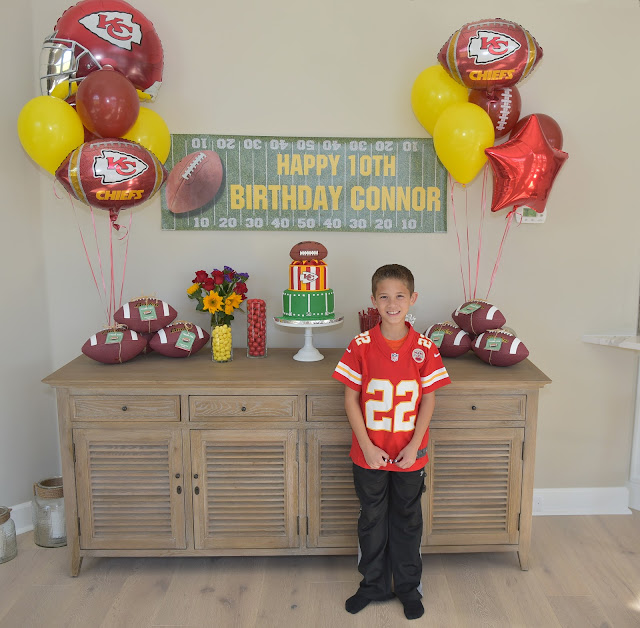 Friday night, March 3rd 2017, we celebrated Connor's 10th birthday with a football party. We were able to re-use quite a few of our plans and ideas from last year's football party, and although we got some new decorations, it wasn't too hard to plan at least. I was a little worried Connor wouldn't have enough buddies to come to the party since he was new to his school, but everyone he invited came and made it a special day for him.

Before the party, we took some pics of Connor and the family with the decorations. 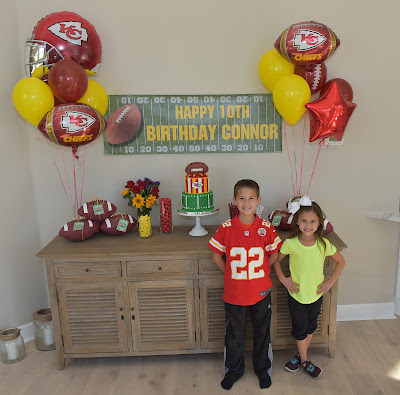 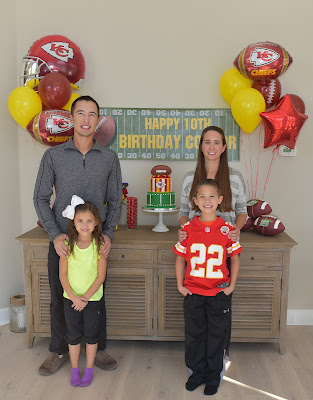 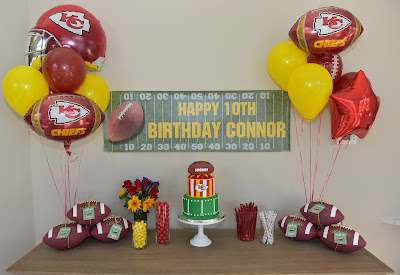 Jo did the cake again, and I will say it was the best cake we've ever had. The football was made with chocolate on the outside and a thickly packed rice crispy treat on the inside. The top layer was strawberry, with pureed strawberry filling. The bottom layer was marble cake, the best I've ever tasted. 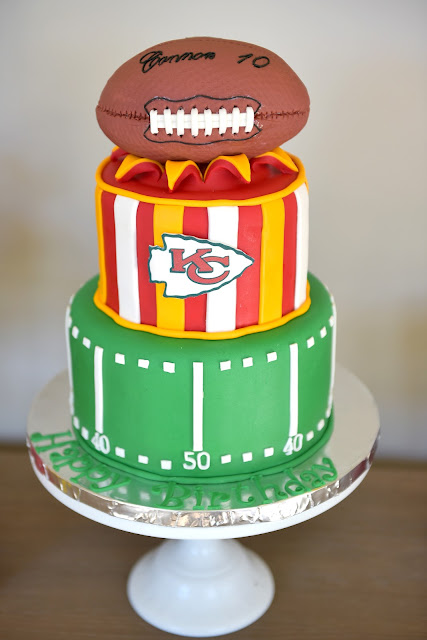 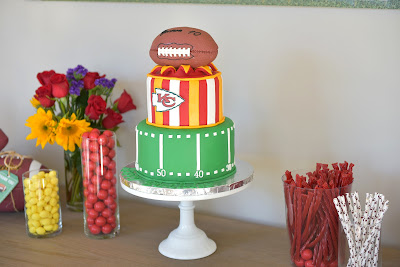 A little after 5, we showed up at the neighborhood park and the boys started to arrive. Connor's really been in to basketball recently, and had started to wish he'd had a basketball party instead. Thankfully there was a basketball court at the park and we were able to bring some basketballs as well, so they got to play a bit of everything. 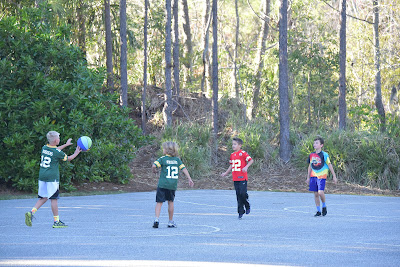 After some basketball, we started with the footballs. Everyone put on their flags, practiced some passing, and then we had a pass competition to see who could throw footballs in to the red tub the most accurately. Lucas ended up winning that competition. Next we did a punt competition, and Connor went first. His punt got a great bounce and nobody was able to beat it. 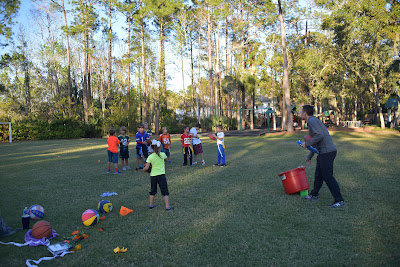 Finally, we started some football games. Andrea and I divided the kids up as evenly as we were able to, and they started to play. Andrea got one video and I took some pictures. Surprisingly I had to intervene and officiate much more than in the past. The boys were extremely competitive and all were pretty good athletes, so it was tough keeping things safe and fun. We had to ban hurdling, stiff arms, and a few other football moves to make sure everyone went home with all their teeth. 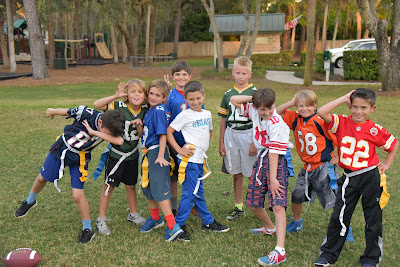 We took a couple group pics and it was tricky to get them all to pay attention and look at the camera, but we got a couple goofy pics and a few regular smiling pics. 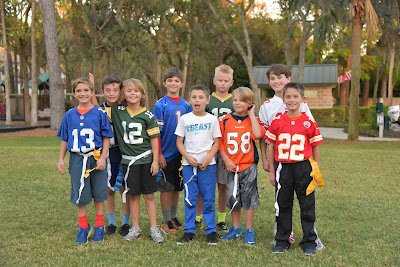 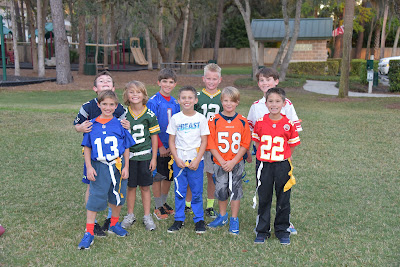 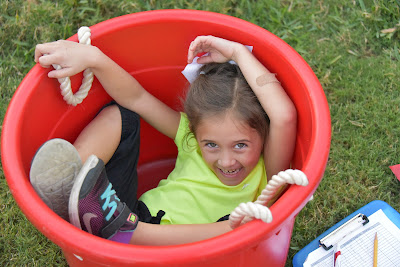 Paige and Andrea were both big helps getting the footballs during the games and taking some pics. 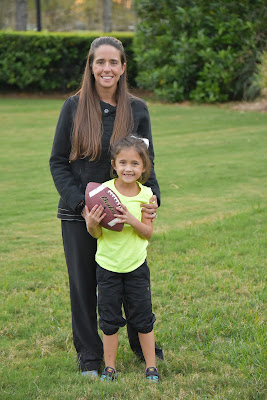 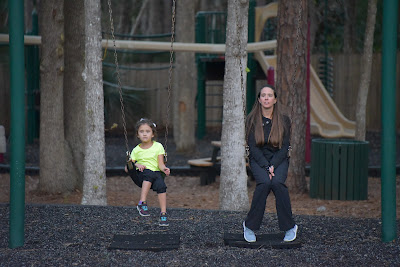 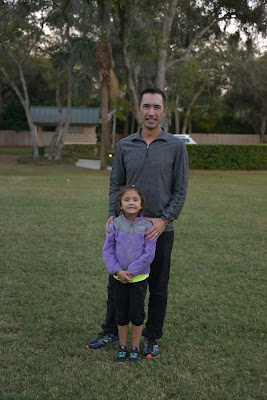 After it got dark we went back to the house for the pizza and cake. The pizza was scheduled to show up at 6:45, but was super late. The boys ran around on the golf course very briefly before I realized that was a bad idea. Then, they sat around the table outside discussing all the hot girls in their grades and all the classmates that they knew. It was pretty entertaining for me since Connor rarely talks much about school with us. 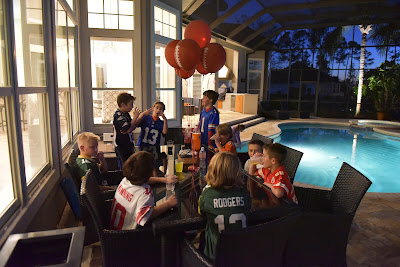 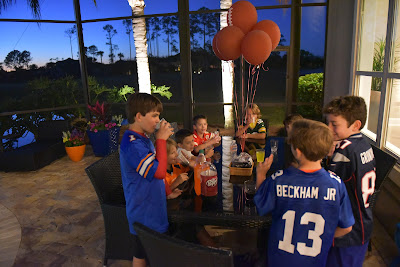 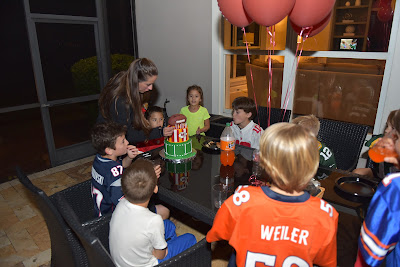 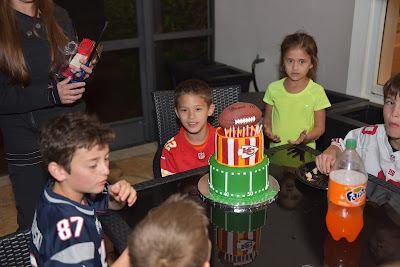 After the pizza finally arrived, we pigged out, and then lit the candles on the cake. One of the candles was a bit too close to the football and started to melt it. We were worried it'd burn the whole cake up, so we sang "happy birthday" super fast and then Connor blew out the candles. 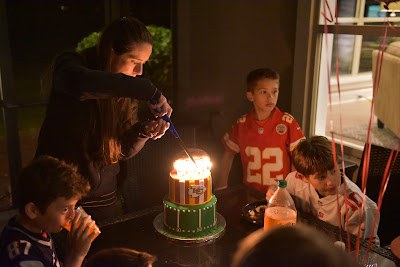 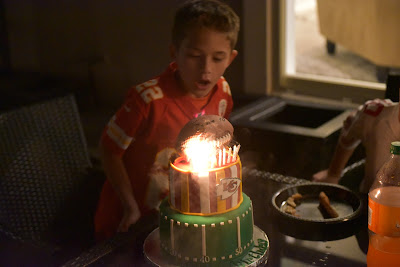 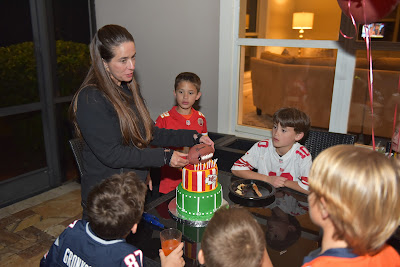 I took a pic well after the party of the inside of the cake. It was definitely tasty! 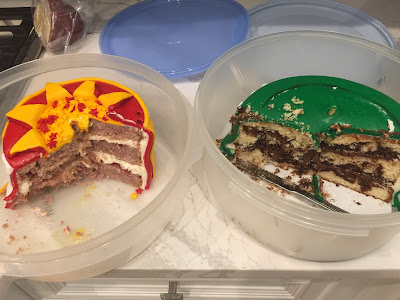 After cake, the boys went out and played basketball in the driveway until their parents started to pick them up. Trevor's parents were out partying, so we made an exception for him and he got to spend the night. The party was a success, and the important thing is that Connor had a fun time with his buddies.