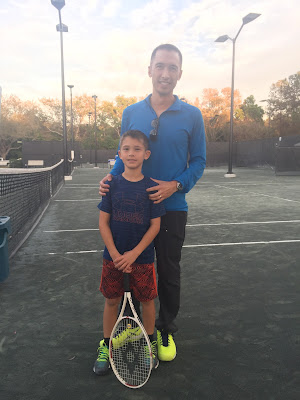 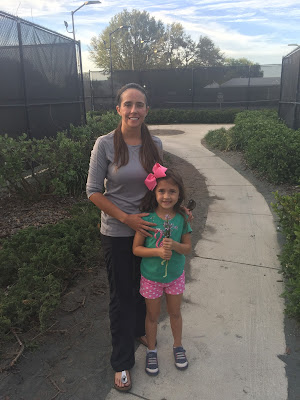 Connor had a tennis match with his team at Queen's Harbor on March 10th. He played singles on line 2 and doubles on line 1 with Lucas. The scoring was different than in the past. The kids played 4 game sets, and the first to get to 4 games would win, not necessarily by 2. The singles match included deuce points, but the doubles match was no-ad.

Connor's singles match was difficult, but played in to his strengths. The other little boy he played against was fairly consistent, but Connor was consistent and accurate and did a good job moving the other boy around on the court. Connor won in two sets 4-1, 4-1.

In the video I uploaded, Connor isn't hitting the ball as hard as he's able, but it's a good point to show Connor placing the ball and making his opponent move. Connor's opponent is serving at 30-40. Connor directs the ball to both sides of the court smartly, controls the pace and point, and ends up winning the game.


In the doubles match, Connor and Lucas won 4-3, 4-2. Connor's opponent from his singles match faced him again in doubles, and Lucas's singles opponent faced them as well.

The video I uploaded for the doubles match is pretty good, showing Connor hitting the ball in accurately and then Lucas closed in with a big swing to finish the point. Lucas likes to swing big, and it worked occasionally, but it got them in some trouble too during the match when he missed. Overall, they had fun and I'm glad they also won their matchup.