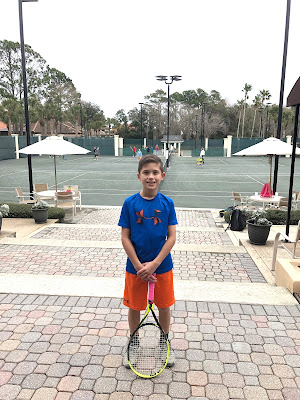 It's tennis season for middle school, and Connor recently tried out for the tennis team. It was a pretty interesting and a bit stressful for him to go through the tryout process. There wasn't very much communication around how the tryouts work and how many kids would make the team. Connor and 67 other kids showed up for the two day tryouts and Connor tried hard to show the coaches that he was a good player. They had to wait a long weekend after the tryouts to learn whether they made the team or not, and since Andrea had used an email address for the signups that she doesn't check very often, we didn't find out until very late that he made the team. We were a bit scared for a day when we started hearing other kids had made the team, but we hadn't found the email yet.

Anyways, Connor did make one of the teams, there were three teams that each had ten kids, so 30 of the 68 kids made a tennis team. Connor's been going to a few practices now, and we're proud of him for making the team and it's neat that he gets to represent his school with a sport that he's good at. We're looking forwards to his games starting this next week! Go Connor!