Canceled Tennis tournament and cleaning in the rain 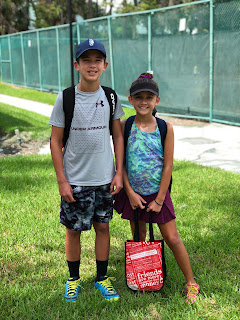 On Saturday September 12th, Connor and Paige were both scheduled to play in a tennis tournament in the neighborhood. We got them to the courts, put on sunscreen, took a pre-match picture and got Paige's court assignment. As Paige walked to her court with her opponent, it started to pour rain and we realized pretty soon that the tournament was going to be canceled for the day. It was rescheduled a few times, but as of today it doesn't look like we'll ever get it scheduled because of the weather.

We got home and during a lull in the rain we decided to do some work on the lanai. Just as we were finishing up, it started pouring rain again and I took a video of Andrea working with the kids. It actually felt better than when it's too hot. 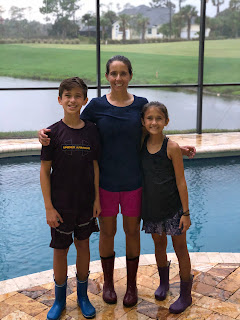