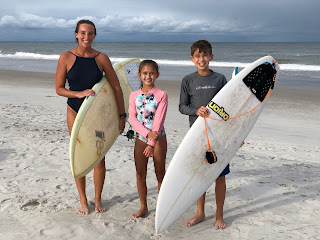 Connor and Paige had their second surf lesson with Cierra on Friday. They had better waves this time around and both were able to catch some pretty decent ones. The last time the waves were actually too strong and they were only able to go out one at a time. This time they both had boards and were able to try and catch waves together. There was a big blue foam longboard and a smaller wooden white one. They both tended to do better with the blue board, but it was a nice opportunity to practice with each.