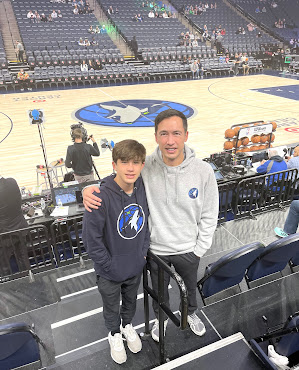 This year we talked to Connor at length about what he wanted to do for his birthday. He tends to be a low maintenance kid and sometimes it's difficult to get him to tell you what he wants. We threw a bunch of ideas to him about different parties we could throw for him or things we could do on his birthday and he just wasn't interested. A few weeks before his birthday, I offhandedly said to him that he and I should go on a boy's trip some time. I said it was too bad the football season was over because I'd like to go to a football game. He brought up the fact that he's subscribed to an NBA pass, has been watching basketball recently and he'd like to go see a basketball game. He looked up the Orlando Magic schedule and found a game that was against a team he was interested in.

We started to plan for a trip to Orlando and at one point Andrea had even booked us a room and we were thinking about inviting some of his buddies to go with us. It all fell apart when I started looking at tickets and I realized the game he'd found was an away game and was nowhere near us. We started looking at all the other Magic games that were in Orlando and there just weren't any that Connor wanted to see. We started expanding our search and looked at some games nearby that were driving distance. None of the nearby teams were all that exciting either and we started thinking about going further and possibly flying. At that point, Andrea just asked him what his favorite team was right now and he said it was the Minnesota Timberwolves. We looked up their schedule and there was a home game on a Saturday that would work perfectly. Andrea reserved us a swanky room that was across the street from the Target Center where the Timberwolves play and we booked the airfare.

We flew out on Friday and it was actually a close call to make the flight. I swear when we booked the flight we calculated that we'd have plenty of time to grab Connor when he got off the bus and make it to the airport. On Friday I was finishing my packing and I looked at the flight details and realized that it was set to take off at 5:45. With Connor getting off the bus at 4:30, that would not be enough time to drive to the airport, park, get through security, and get to our gate. I immediately jumped in the car and Andrea called the school so we could pick Connor up early. I was freaking out when we hit some rush hour traffic on the way, but thankfully we made it with a little time to spare.

In the morning on Saturday, I told Connor that we would do whatever he wanted prior to the basketball game. He said he wanted to hit the gym and then go to lunch. 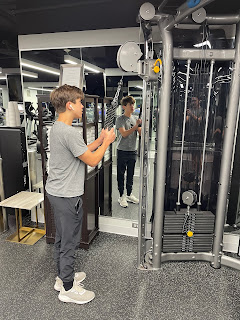 On the way to lunch I snapped a picture of Connor in front of the Target Center. You can see the covered walkway that actually connects it to the hotel where we stayed. Connor was annoyed I took the picture when I did, but I'm glad I took it because it started to rain and it was miserable and wet the rest of the time we were in Minnesota. He would really have been annoyed if I'd made him pose in the freezing rain. 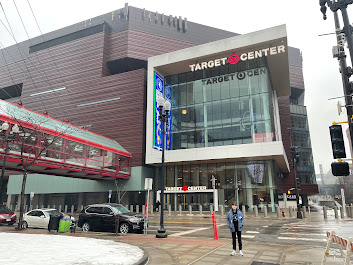 The lunch place I wanted to try was closed on Saturdays which was inconsistent with what was online. We walked around downtown for a while and looked at a couple other places before settling on a breakfast restaurant. Connor had French Toast and Chicken and he said it was delicious. I had Chicken and Waffles and it was likely one of the messiest meals I've eaten, but it was tasty. 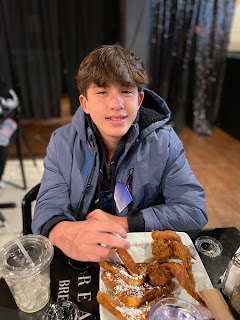 In the afternoon we relaxed, I took a nap, then we put on our Timberwolves sweatshirts and walked across the street to the Target Center. On the way to our seats we grabbed some empanadas for me and a chicken and rice bowl for Connor. We watched the players warm up and we were pretty thrilled with our seats. We were exactly at midcourt and were the first row that wasn't technically "courtside" seating. Honestly I liked our chairs better that the seats below since ours had armrests and cup holders and we were very close to the action still but a little higher up so our angle was great. 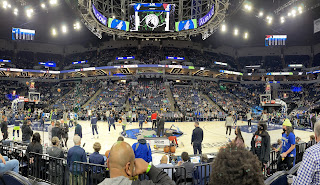 Andrea was watching from home and I told her where we were sitting and she was able to spot us a couple times on TV. She paused it and took a picture of us, we're just below the "State Farm" banner in the pic. 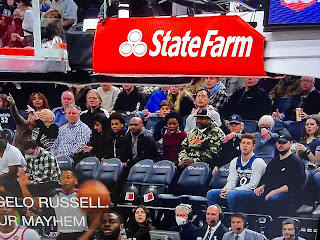 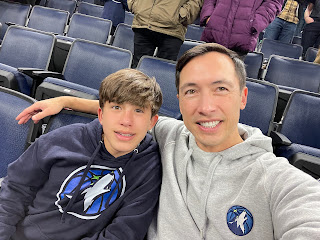 At halftime we did a little shopping and I spoiled Connor by getting him a jersey and a basketball. It was an awesome experience watching an NBA game live and together with my birthday boy. The game was super close up until the last few minutes and the Timberwolves pulled away in the end and won. Connor loved it so much he is already talking about going to other games in person.
In the morning we got room service for breakfast and then went to the airport and flew home. It was such a great feeling to feel the warm humid Florida weather after our cold weekend in Minnesota. Happy birthday Connor, I hope you will remember your 15th birthday fondly! 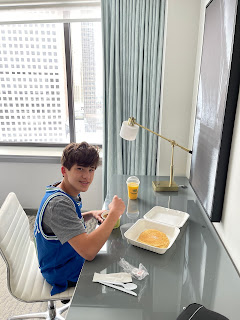