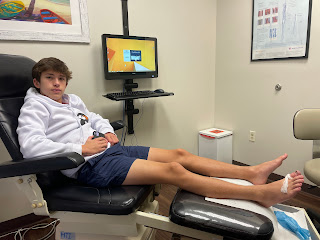 Unfortunately, it seems that Connor's inherited toenail issues from Dad's side of the family. Uncle Chris and Grandpa Rick have had issues with toenails over the years and recently Connor has too. A couple of months ago Connor came in from playing basketball and was limping badly. He said he somehow stubbed his toe and his big toe was bleeding. It didn't heal well and we were worried it got infected at one point and he took some antibiotics after seeing a Nurse Practitioner at CVS's Minute Clinic. It seemed to get a bit better, but then his other foot's big toe started to also have the same issue. At that point I took him to Mayo Clinic for another appointment and she suggested he take a stronger dose of antibiotics and also see a Podiatrist.
Andrea made an appointment with Dr. Reddy and Connor saw him this past week. The doctor confirmed my suspicions that it was an ingrown toenail issue and he did a procedure on both toes to cut away the skin and a section of the side of the toenail. Connor's toes have been very sensitive recently and it hurt to get the numbing injections on the toes, but he was brave about it and we're glad Andrea convinced the doctor to just do both toes while they were there instead of having to come back for another appointment. 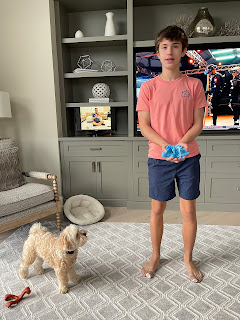 So far his toes are healing up and Connor's able to walk around without any issues.
Posted by Shawn Vernon at 10:58 AM