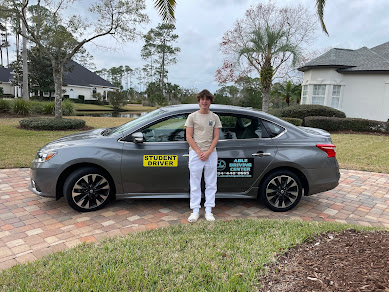 Connor's been driving for a while now and is doing well with it overall. There are times he has a lapse in attention, or won't notice a stop sign, but usually he is a cautious and safe driver. Andrea signed him up for some official driving lessons and we've also been driving with him whenever we are out running errands or going anywhere with him. I didn't even know it was possible to do it early before your 16th birthday, but Andrea signed him up with a local company for a driving lesson and then a test the next day. Connor passed it on his first try, only losing a couple points because he used his turn signal late for one turn and forgot to use the turn signal when parking in a parking lot.

He won't have his license until he's 16, but all the hard stuff is out of the way at this point.