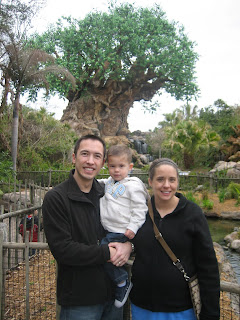 We decided to go to the Animal Kingdom Tuesday despite the forecast. We thought it would be more interesting for Connor than the other two parks (Epcot and Hollywood studios). We got to the Animal Kingdom around noon and watched the Lion King musical show and then went to the safari jeep ride. Right around then it really started to rain. The park didn't have a lot of visitors and we didn't have to wait at all to get on the ride. For us, on the ride, it was actually not that bad. The animals seemed to like the rain and we saw more animals then when Andrea and I had ridden it years ago on another trip.

When we got off the ride, the rain was really coming down and we started to get really wet. When we got on rides, we'd leave the stroller sitting with an umbrella propped up to keep it semi-dry. Before too long we were pretty wet and Great Grandma and Great Grandpa were soaked through to the skin. We ate a quick lunch and afterwards they decided to go back to the hotel to dry out. We stayed for another few hours and rode a bunch of rides. We got wet, but there were no lines at all. Unfortunately for us, Connor was a little too short for some of the rides. Animal Kingdom's not the best park for little kids.

Riding the Dino ride with Daddy. 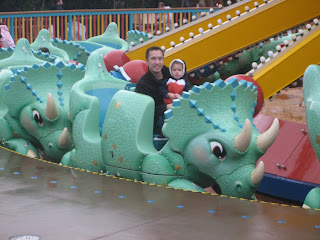 Connor saw Goofy and really wanted to see him again. He gave him a big hug and when Daddy asked him to pose he actually cooperated. 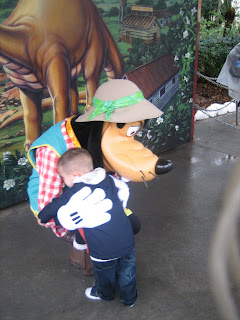 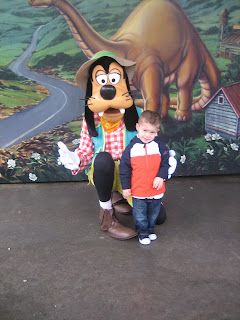 When we got back to our room that night, Connor was pooped. After the Magic Kingdom he'd been wired and had actually stayed up late playing and chattering. Tuesday after two long days he was exhausted. He fell asleep during dinner and didn't wake up when we changed him and put him in bed. Daddy set him down in his little bed and when we looked a couple hours later he hadn't moved at all. 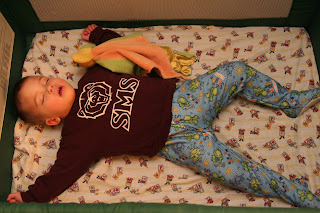