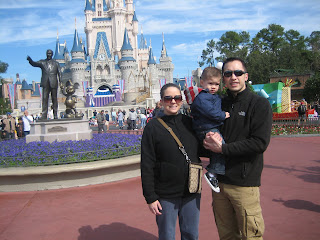 This past week was Connor's first vacation. We went to Florida to meet up with Shawn's grandparents and to visit Disney World. We flew in to Orlando on Sunday and checked in to the hotel. Connor was very good on the flight and is such a great traveler.

Monday morning we went to the Magic Kingdom bright and early. The weather on Monday was the best we'd have all week, so we chose that day to go to the place we knew Connor would enjoy the most. It was a little cold, but it was sunny and warmed up a bit as the day went on.

Connor was a little apprehensive about the rides at first, but the more we went on the more he liked them. Some of the rides were surprisingly scary like Snow White and Pirates of the Caribbean, but we covered Connor's eyes when he got scared and he was fine with it.

It was a long and tiring day, but we all had a lot of fun.

Early on Monday morning waiting for the bus to take us to the Magic Kingdom. 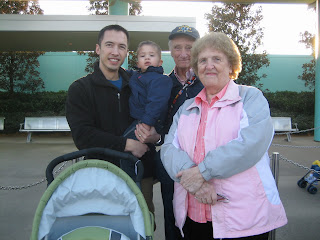 We stayed at the Pop Century resort. The resort was broken up into decades, 50's, 60's, 70's, and 80's. We stayed in the 60's section. It was a big resort with decent sized rooms. The pool was heated and Daddy wanted to take Connor swimming, but it was pretty cold and windy and we never had a good time to go. 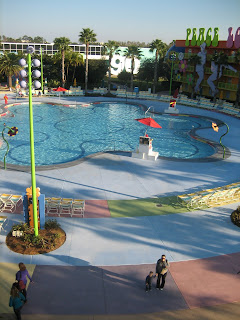 A quick look around the resort.


We wanted to get Connor some Mickey ears, but he freaked out when we put them on him and wanted the hat off. 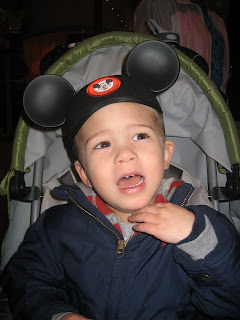 Riding on the Merry Go Round with Daddy. 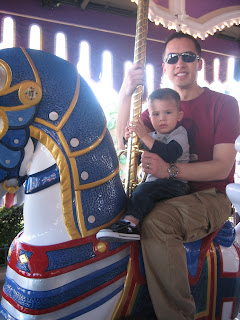 Connor's favorite ride was definitely the go kart. Daddy ran the gas pedal and Connor steered. It was on a track, but actually gave the driver a bit of latitude in steering. This meant that we bounced back and forth on the track the whole way down the track. We bounced so hard a few times that the steering wheel got jolted out of Connor's hands and Daddy had to help. Even so, Connor absolutely loved the ride. 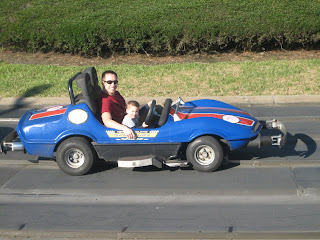 We ate in the "Small World" restaurant and actually got one of the few tables where you could see the boats launching. Connor loved the Small World ride and loved pigging out on chicken nuggets afterward. 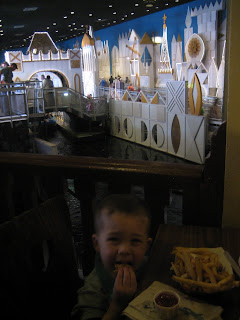 Connor on his first ride at Disney (and ever!). He rode the Mad Hatter's teacup ride with Mommy, Daddy and Great Grandpa. He was terrified once he got in it, but then settled down and looked like he might have almost enjoyed it.


Before we left, Connor was telling us about all the Disney guys he wanted to see.