Tuesday morning we had our Character Breakfast at the Contemporary resort. It's possible to see a lot of the characters at the parks, but there are typically long lines to see them. We saw Mickey and some of the characters Connor likes from his "Mickey Mouse Clubhouse" TV show, but not all of them. We were really glad Mommy set up the Character Breakfast so Connor would have the opportunity to interact with them. Daddy was always terrified of the big stuffed creatures when he was little, so we were a little worried that Connor would be scared and would hate it. 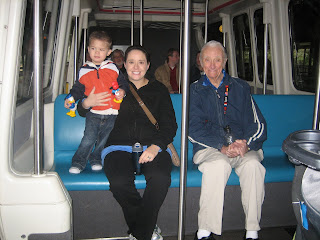 All of us eating breakfast and waiting for Mickey and friends to come around. 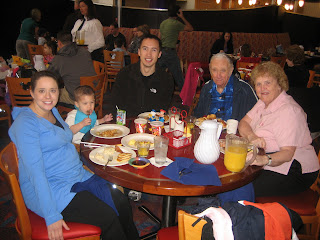 Goofy showed up first and Connor was so involved with his eating that he hardly paid any attention to Goofy. Goofy was determined to get a reaction out of Connor so he took Connor's fork and cut up some food and fed it to Connor. Connor still didn't seem to care, so Goofy decided to help Connor chew and he rubbed Connor's cheeks while he was chewing. 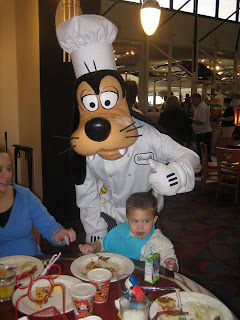 Mickey came by next and Connor was pretty excited to see him, but very shy. He kept turning away, but he was definitely smiling. 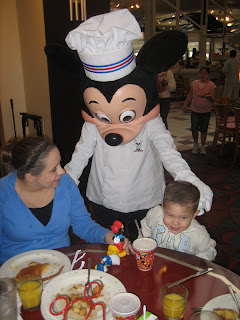 Connor was really getting in to it by the time Minnie showed up. He absolutely lit up when she came over. He even posed for a picture with her. 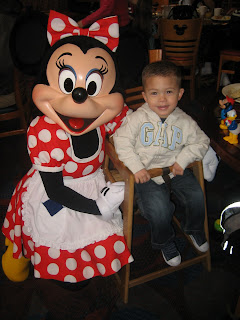 Connor was really excited when Donald Duck showed up. He'd been counting off all the guys he'd seen and he knew he hadn't seen Donald yet. He gave Donald a big hug and showed Donald the little Mickey and Donald Duck toys that Great Grandpa and Great Grandma had bought for him at the Magic Kingdom the day before. 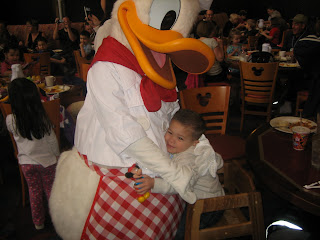 Donald liked the Donald toy, but not the Mickey one. He kept knocking over the Mickey toy and Connor thought that was really funny. 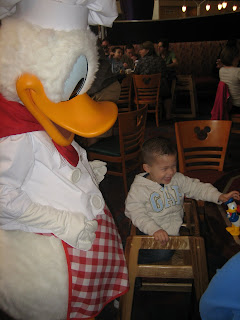 Last was Pluto. By the time Pluto came by, Connor was really in to it. He grabbed Pluto's nose, gave him hugs and kisses and played with him a bunch. One of the dads sitting nearby told us afterwards that watching Connor interacting with Pluto was the cutest thing he'd seen at Disney. Connor was definitely loving the characters. It's a shame that Daisy didn't come by, Connor knew she was missing and was the only one of the Mickey Mouse Clubhouse characters that wasn't there. 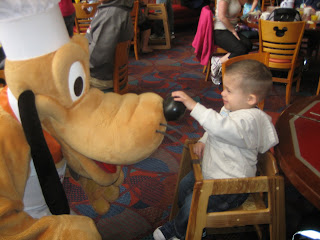 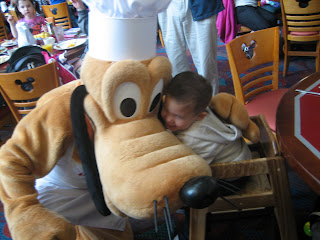