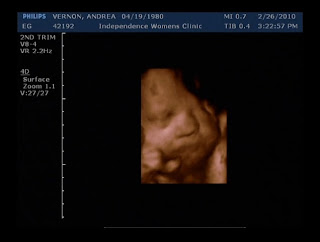 On Friday we went to do a 3d/4d sonogram on Paige. In our first sonogram the tech said she was 85% sure that it was a girl, but we wanted a second opinion. We also thought it would be kind of fun to see the 3d/4d sonogram.

Before we went back to the room, Andrea said: "Let's not tell her that we know it's a girl and see what she says." As soon as the sonogram started, the tech happened to put the little scanner in the right place and literally within three seconds she said "It's a girl!" She was 100% sure right away. We spent the rest of the appointment trying to maneuver Andrea and Paige in to the right positions to get a half decent picture.

We've got friends that did the 3d/4d sonograms before and have had problems because the baby kept putting their hands or arms over their faces. Paige had a similar problem, but it was her feet! She had both legs up by her head the whole time and typically had both feet over her head. She moved around a lot too, which made it difficult to get a good picture. Just like her big brother Connor!

We only posted three of the pictures from the appointment. Most were really not that great, definitely not what you see in the advertisements for these things. It was kind of fun to do the 3d/4d sonogram and we were happy that we were able to confirm that Andrea can start decorating Paige's room and buying girly stuff. 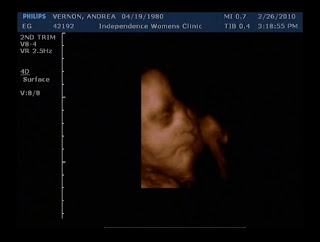 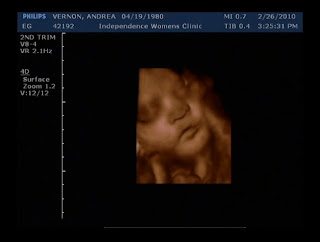 We took this picture of Andrea before the appointment. She will be 30 weeks pregnant on Monday! Getting very close. She is feeling pretty well so far, but pretty exhausted at times. 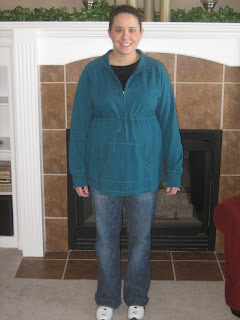