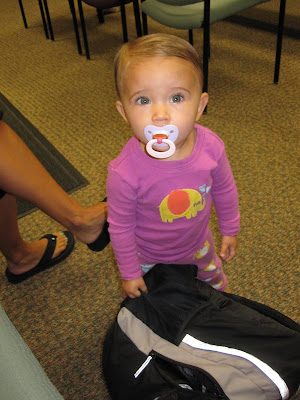 This Friday we got tubes for Paige's ears. She had 5 ear infections recently and enough was enough. She actually had a little bit of a fever late in the week and we were worried she wouldn't be able to go through with it. Thankfully it was pretty mild and we brought her to the surgery center as scheduled.

We got up early Friday morning and brought Paige in her pajamas. She was a little confused as to what was going on, but was a good sport and played along. 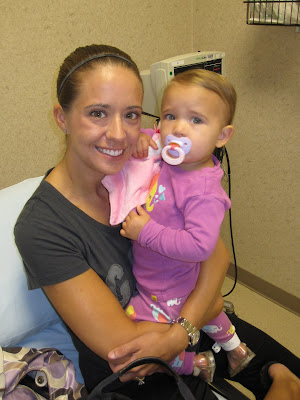 As with our last time when we brought Connor, it was a very fast procedure. By the time the nurses brought her back to the surgery area, we only waited 5-10 minutes before the doctor came and told us that everything went fine. She had a mild ear infection in one ear. The tubes went in with no complication and after a few minutes of waiting we got to go to the recovery area where she was waking up.

She was very groggy but was surprisingly calm and sweet when she woke up. Most kids cry quite a bit when they wake up and the sound of their crying sounds so weird to them it makes them cry more and more. Connor cried quite a bit when he woke up. Paige was a lot younger and the nurses said that often the young ones aren't nearly as affected as the older kids. Paige was definitely a lot calmer and hardly cried at all.

She hadn't been able to eat or drink anything since midnight, so we gave her some milk and a cereal bar as she woke up. 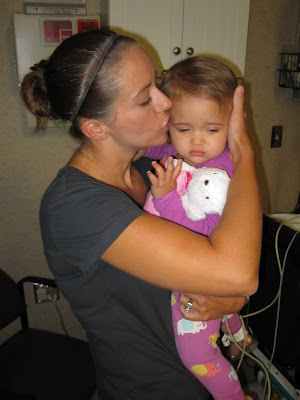 She was doing great, so after a little while Daddy said: "Hey, let's get a picture with me in it." But Paige wasn't in the mood. 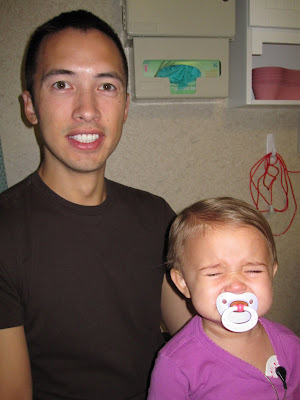 We brought her home after the nurses decided she was ready. Once we got home she took a four hour nap and she woke up in a great mood. Throughout the day we did most things as normal and she did really well. No problems so far, hopefully this solves her ear issues!
Posted by Shawn Vernon at 1:26 PM