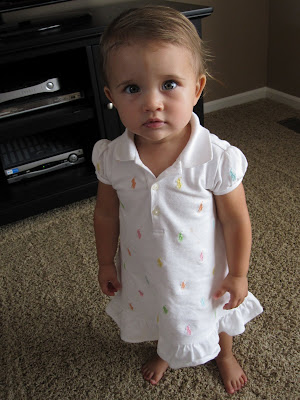 Paige has been such a different baby than Connor. It's been amazing to watch her personality develop. She is a very determined and headstrong baby. Whereas Connor would test your parenting from time to time, it seems like Paige tests everything you say. She will hardly ever stop what she's doing without a fight. She's strong willed and isn't scared of anyone. She'll stick up for herself if another child tries to take her toy and she's always trying to play with whatever other people are using. Her favorite things include Connor's lion, Mommy's phone, Daddy's food, and whatever else people have in their hands.

In this video, Paige is upset that Daddy won't let her play with his phone. It's a good example of Paige forcing out tears. At about the 35 second mark you can see her clench her fists, squeeze hard, and out pops a tear. She reaches up to touch it, to make sure it's a good one.