We all got sick this last week.

It all started on Monday when Rachel, the kids' babysitter called and told me that Paige had vomited. I went to pick her up and we didn't really think she was all that sick. I was hoping she had just gagged on some drainage from her runny nose or something. She just seemed normal, happy, and didn't have a temperature or any other symptoms. We fed her a normal lunch... and it came right back up. It was kind of bizarre since she seemed so normal otherwise. After vomiting, she'd be upset for a couple seconds, but then she'd be her regular old sassy self. We gave her some water to drink to wash out the vomit from her throat and a little while later it all came up. At that point, we held off before giving her anything more and during her nap she vomited again in her bed.

Thankfully (although we didn't know it at the time) that was it for Paige. Unfortunately, it was just the beginning for everyone else.

Connor had been to school and had lived a pretty normal day. When I got him off the bus, I saw that he'd fallen asleep, and was a little quieter than normal, but nothing too out of the ordinary. He sat on the couch for a few minutes as we got his dinner together and suddenly he coughed and made a gagging sound. Mommy and I both froze, staring at him in disbelief. It was one of those long moments where you know what's about to happen, but you're somehow hoping that your senses are lying to you and it won't turn out like you know it will.

Then, vomit. Everywhere. All over him, all over the couch. We tried to get him to the wood floor, but it got on the carpet first. Andrea took him to the sink to clean up and I started along the tedious process of stripping the covers off the couch cushions, washing everything, and cleaning the carpet. Thankfully not much got on the floor. 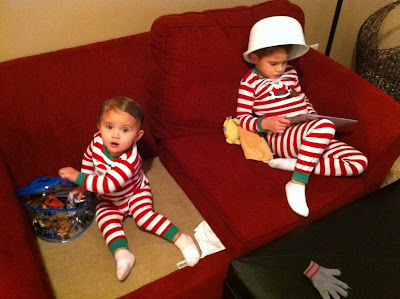 We got done cleaning and Connor sat on the clean side of the couch with a bucket nearby in case he needed to throw up again. Paige kept wanting to play with it, so I suggested he wear it as a hat to keep it away from her. Surprisingly he did, and surprisingly it worked! I took a quick picture of the kids on the couch, hoping that would be the end of our adventure. 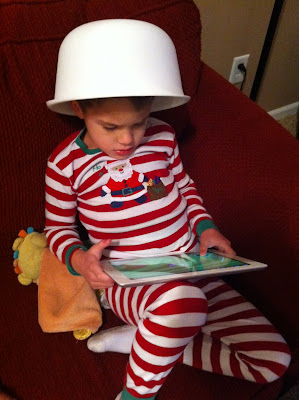 The kids stayed home Tuesday and Connor felt nauseous while eating. He was pretty miserable and complaining about tummy aches. At one point, we got him a bucket to barf into and sat him down on the wood floor. Paige decided she wanted to join in the fun and got a white bucket-like object and sat down with him. We took him to the doctor on Tuesday to get swabbed for strep and to double-check that we were treating everything correctly. Everything came back normal and it was confirmed that it was just a stomach bug that had been going around lately. 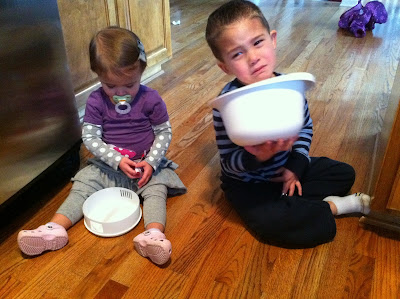 By Tuesday night, things had gotten mostly back to normal. The kids were feeling much better and we were hoping for a relaxing Wednesday for everyone. The kids are usually home on Wednesdays anyways, and it was a nice extra day for them to recuperate. We were hopeful that they'd be back to their normal selves on Wednesday.

Andrea and I both had been vigilant about hand washing and being careful not to catch whatever it was that got the kids sick. Unfortunately, Tuesday night (actually very early Wednesday morning), it was Mommy and Daddy's turn. I would put it somewhere in my top 10 list of worst pains I'd experienced. We were both up most of the night, completely drained of energy, dehydrated and exhausted. When morning came, we faced one of the longest days ever. Both kids were good as new and ready to play. We both felt awful.

Thankfully, Mommy handles this kind of thing better than Daddy. We both shared in the tasks of taking care of the children throughout the day and both had an opportunity to take a nap, but it was a LONG day and Mommy took care of everyone.

Today is Friday, and we are all pretty much back to normal. This is when we really remember to appreciate the days when we feel normal and healthy.
Posted by Shawn Vernon at 9:01 PM