At Connor's school, they don't really do Halloween dress up for whatever reason. Instead, they decided to make it educational and with no candy. The Kindergarteners all had the opportunity to dress up as "Community Helpers" and participate in a parade around the school. This means that the parents either have to use the community helper costume for Halloween, or buy an extra costume. We decided to get Connor an extra costume since this theme wasn't his choice. Andrea found him a really cute EMT costume. She took a picture of him with his buddy Trevor at the bus stop.


Both of us went to his school to see the parade and we thought it would just be around a couple hallways, but they went all over the whole school. We almost didn't follow the procession when it passed us at first, but we're glad we did. It was fun to walk with Connor and his class and see the school. All the other grades from 1st through 8th came out to see them and cheer for them. It was very fun for the Kindergarteners and it was neat to see the older kids being so sweet with them.

I took a short video of Connor as he went through one of the halls with the older kids.

Mommy did a great job with her little man's costume. 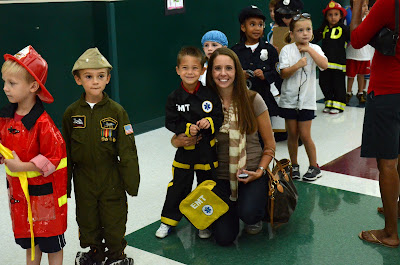 I was glad I was able to take off work to see him! 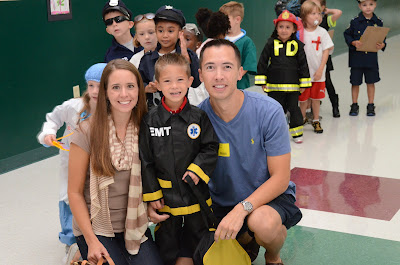