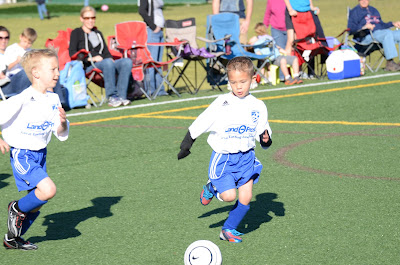 Connor had the second game of his soccer season on Saturday. His team's doing pretty well playing together and Connor really enjoys the games. On Saturday, their team fell behind pretty early on and Connor rallied to score their first 3 goals in a row. The rest of the team picked up the pace, but they never quite caught back up. Connor scored at least 4 goals, possibly 5. It's hard to always keep track and there's often a crowd of kids around the goal when the ball goes in.

We put together a video of Connor's game. He had a bunch of really good defensive plays and a few assists as well. There was one kid on the other team that scored a few goals early in the game and Connor really went after him. We were impressed with his aggressive play and talked to him about it afterwards. Connor told us the other boy was good so he was extra hard on him. You can see him bump in to the boy in the video and prevent what otherwise would have been an easy goal.