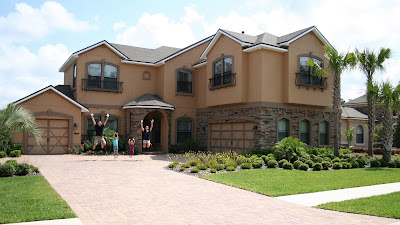 Back in September of 2011 we paid off our first house and were pretty darn proud of it (http://babyvernon.blogspot.com/2011/09/were-debt-free-including-house.html). We worked hard for that day and it was a great feeling knowing that we were paying nobody in the world any interest. When we moved to Florida, we decided to buy a bigger house and didn't have the money to pay for it outright. We contemplated postponing the move until we saved up the cash, but the market was good at the time and we were ready to move.

This month, we paid off our Florida house! Since we paid off our last house, we've been saving our money and put a big down payment on the Florida house when we moved in. We could have probably paid it off six months earlier, but we had some projects with the move and new house. We furnished almost the entire house, built a pool and of course paid for two moves (one from Missouri and one from the rental). It's a great feeling to be back in this position again and we're thankful we have been able to do this so quickly as we'd planned and hoped. It's an awesome feeling when a plan comes together!
Posted by Shawn Vernon at 1:02 PM

I too always felt better being debt free. I'm glad you guys were able to do this. Hard work and good planning pay off.

I too always felt better being debt free. I'm glad you guys were able to do this. Hard work and good planning pay off.