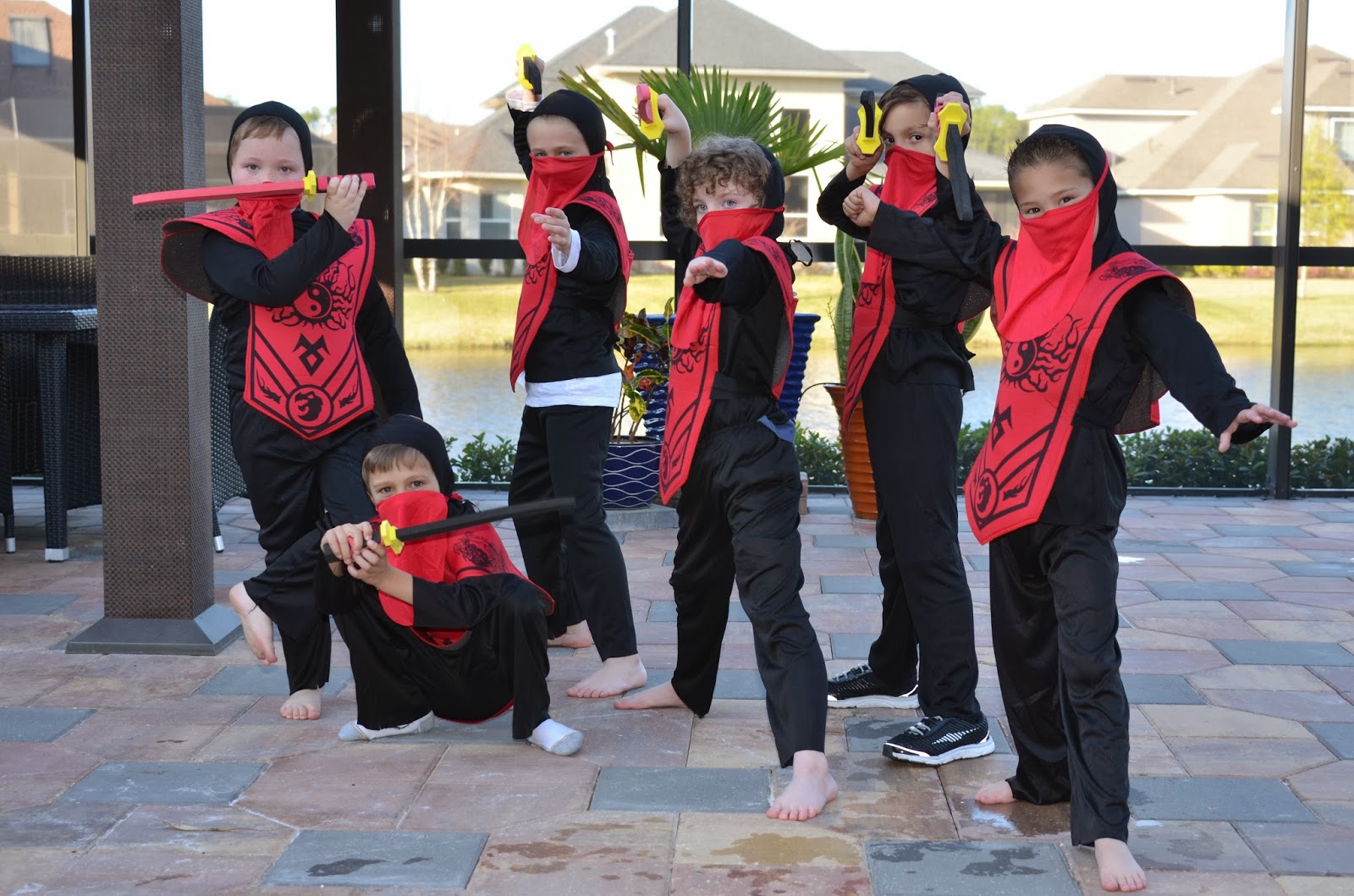 Today we celebrated Connor's 7th birthday with a Ninja Sleepover party. We've had a few sleepovers here and there with friends, but this was the first time we decided to have multiple boys overnight at the same time. Andrea's been planning the party for a while and had asked Connor what he wanted to do for his birthday. He's in to all kinds of sports, but he still loves Ninja Warrior and ninja stuff, so that was the theme. Andrea got all kinds of Ninja decorations and all the boys got ninja costumes to wear and keep as party favors. Andrea asked Connor who he'd like to come over and he picked Logan, Trevor, Nick, Adrian and Danny.

Before everyone arrived, we got a few family pictures with all the decorations. 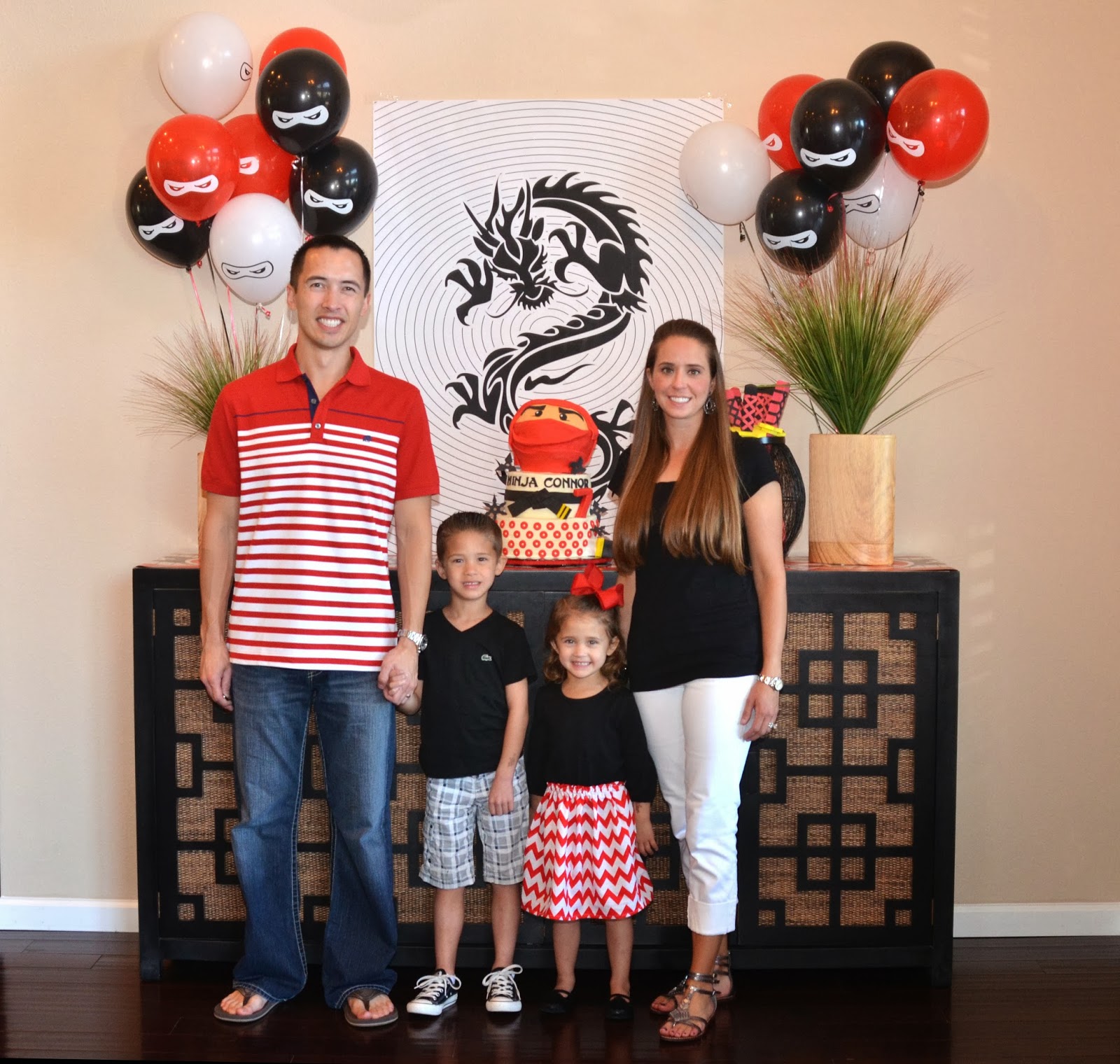 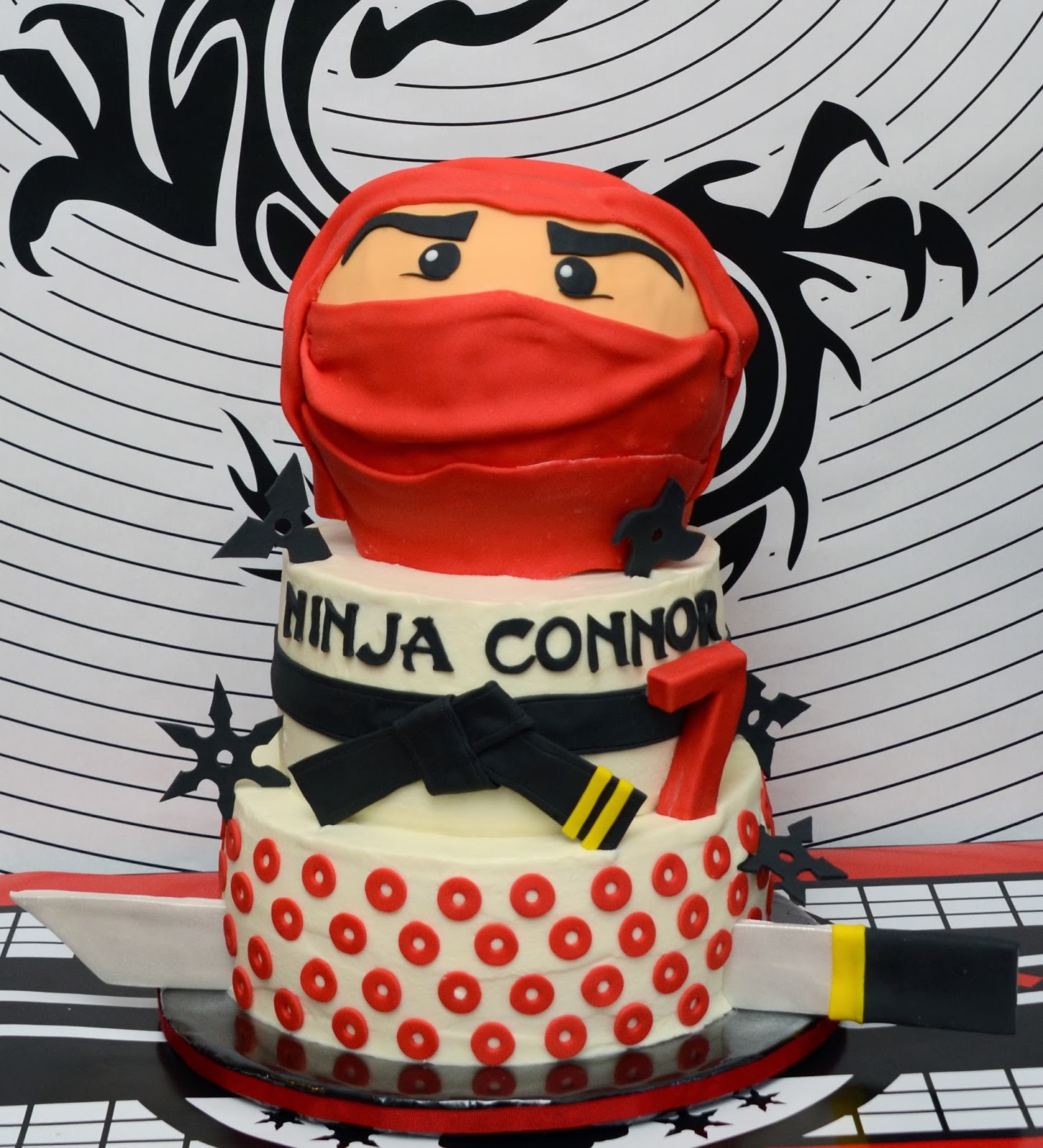 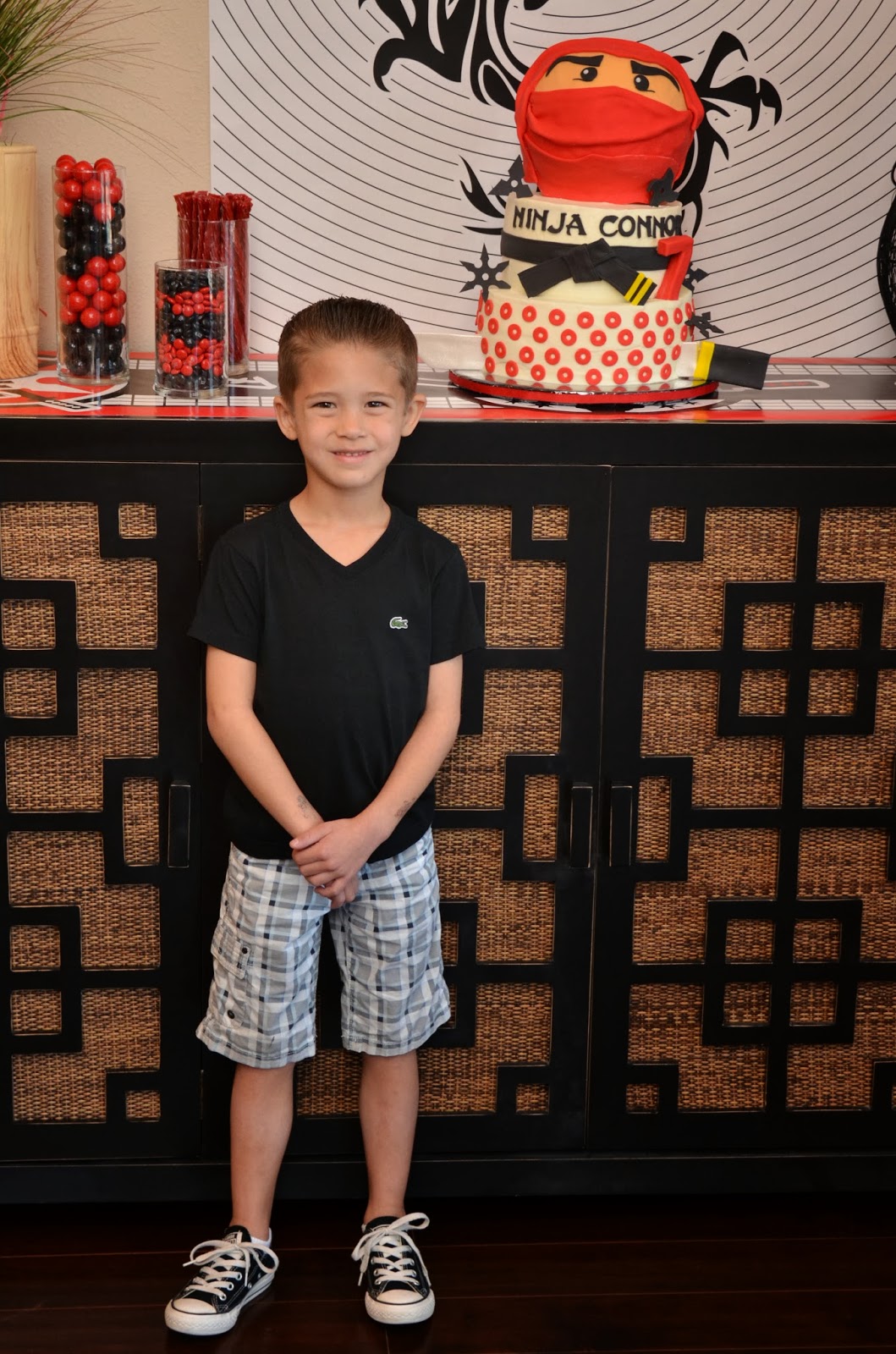 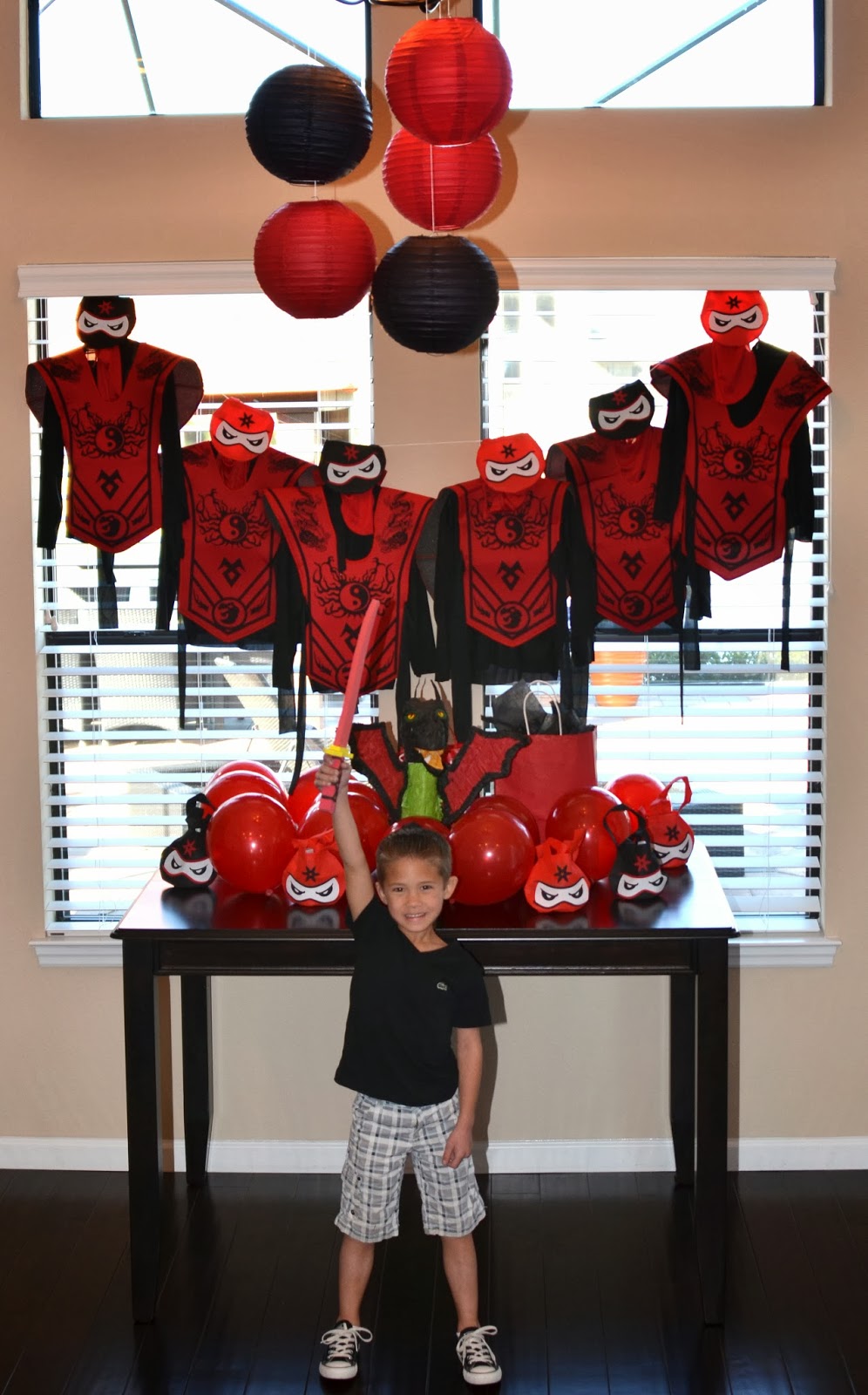 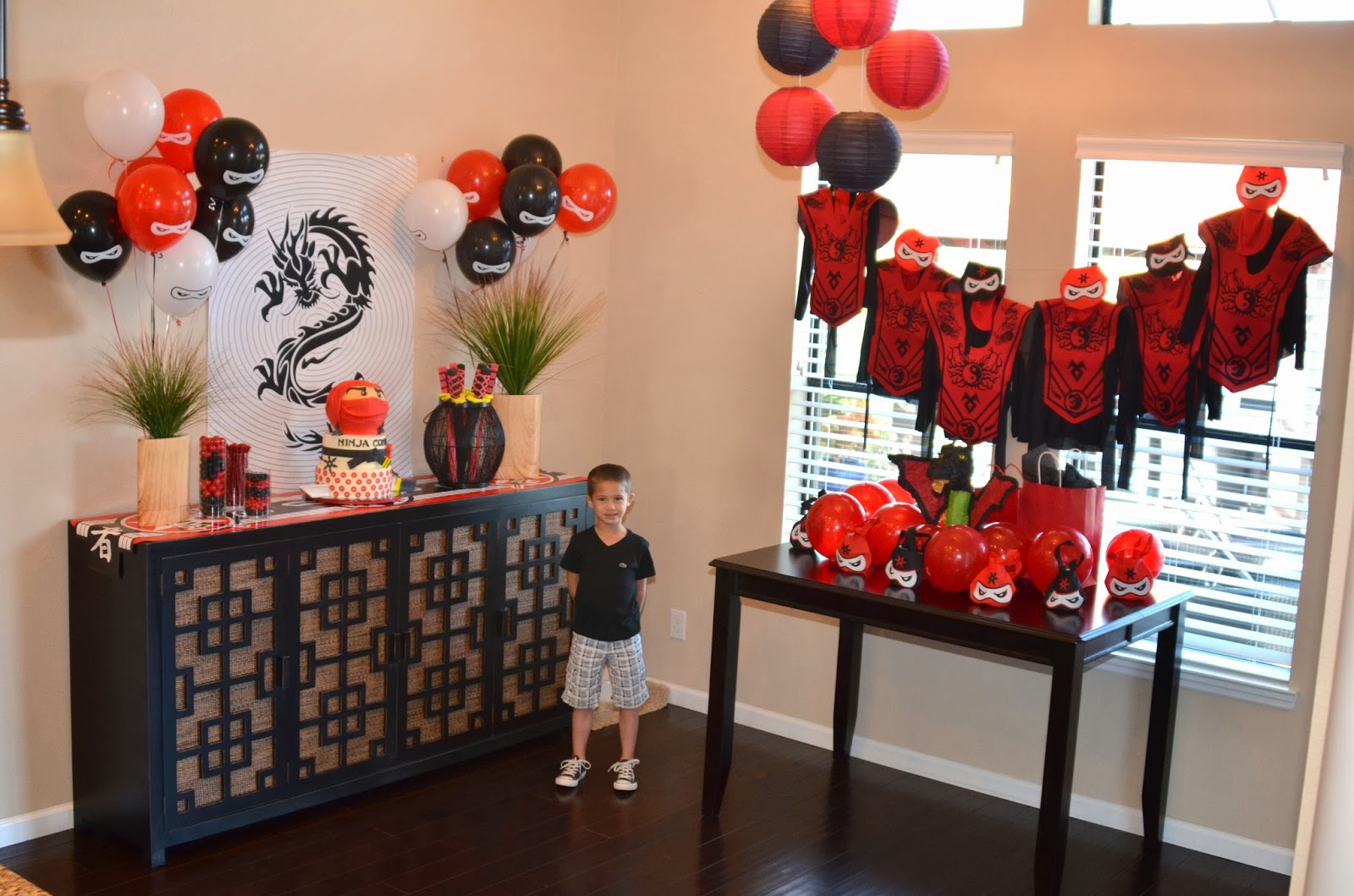 After all the boys arrived, we snapped a few pictures of them with the decorations. 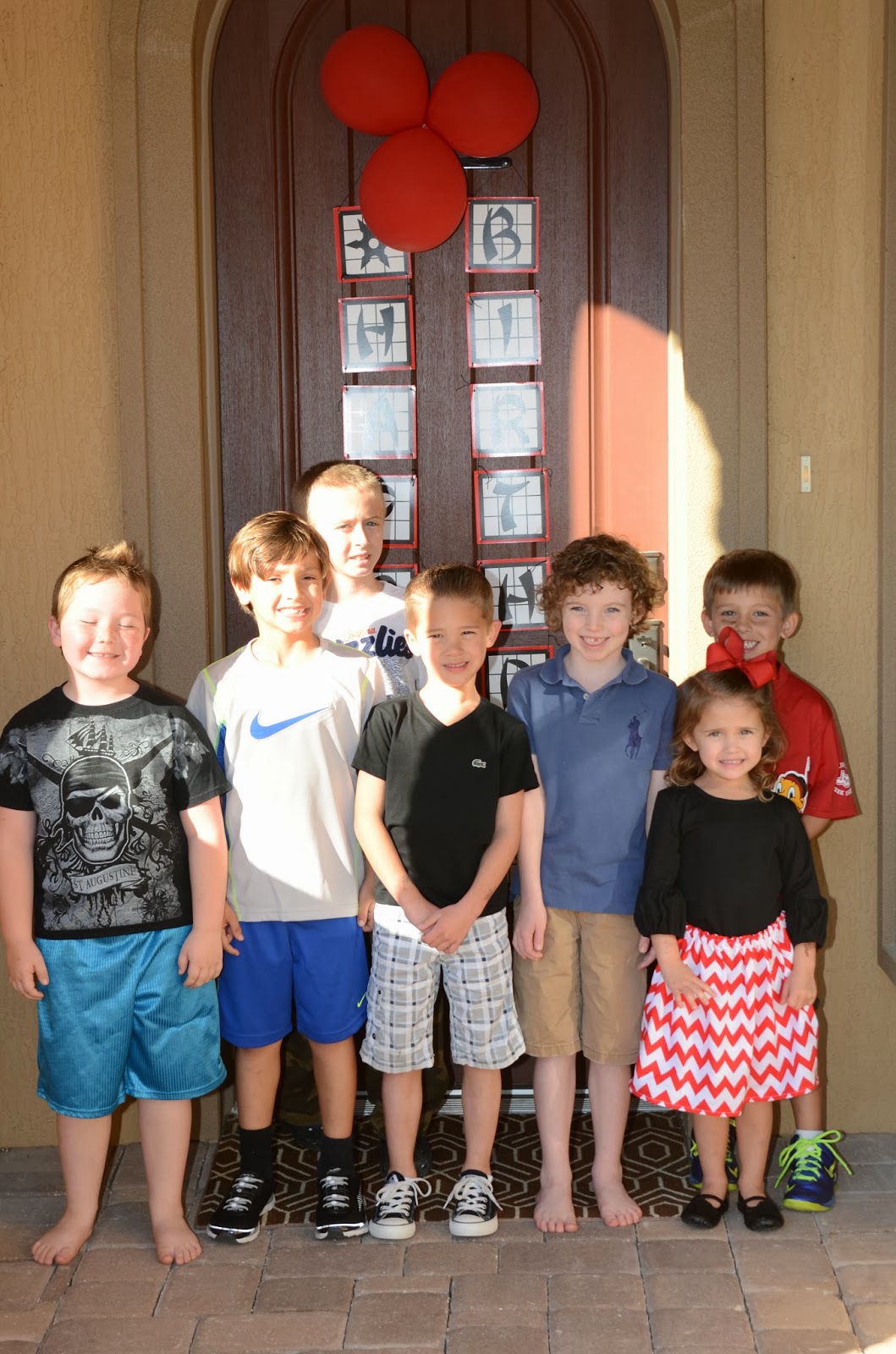 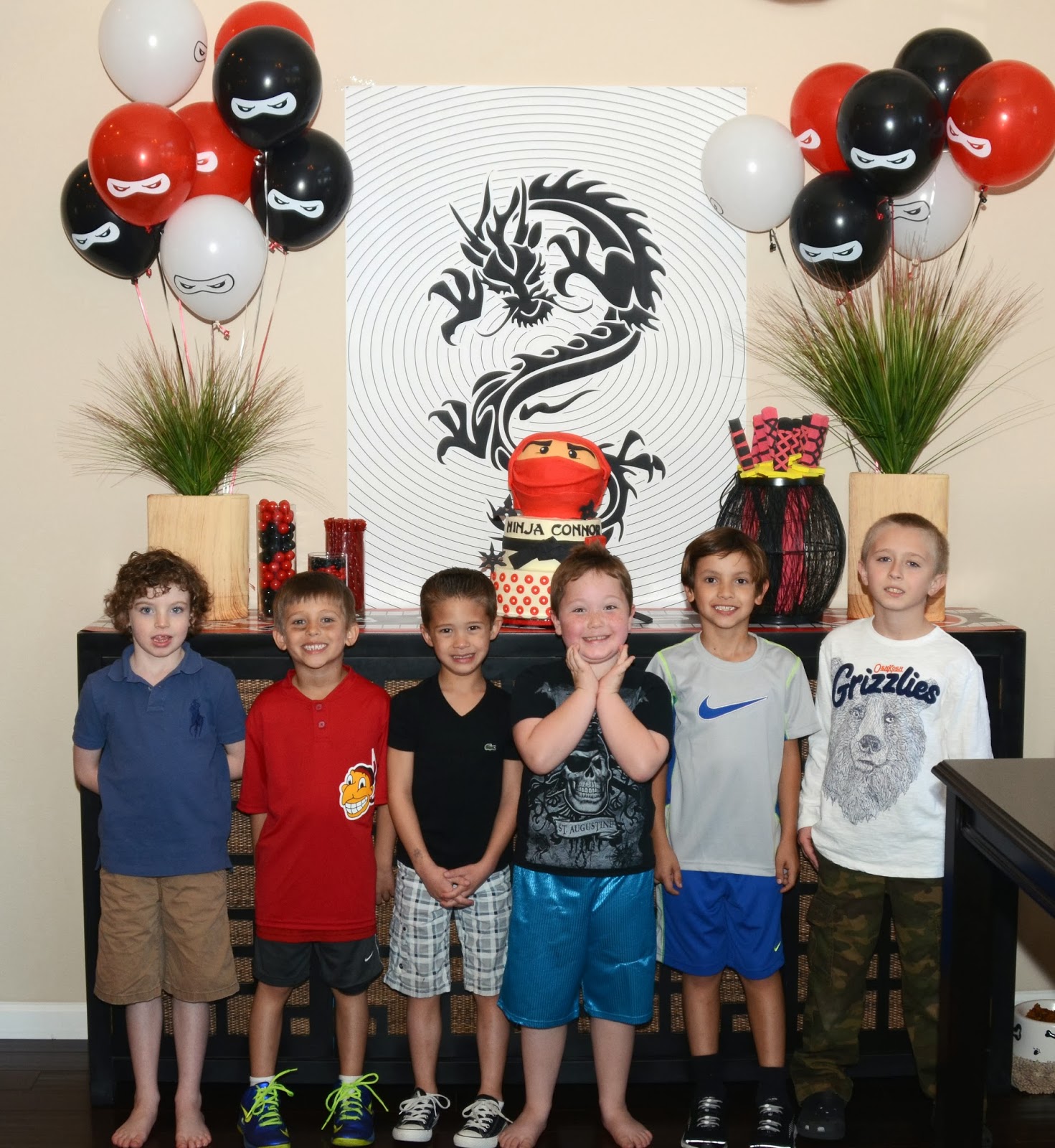 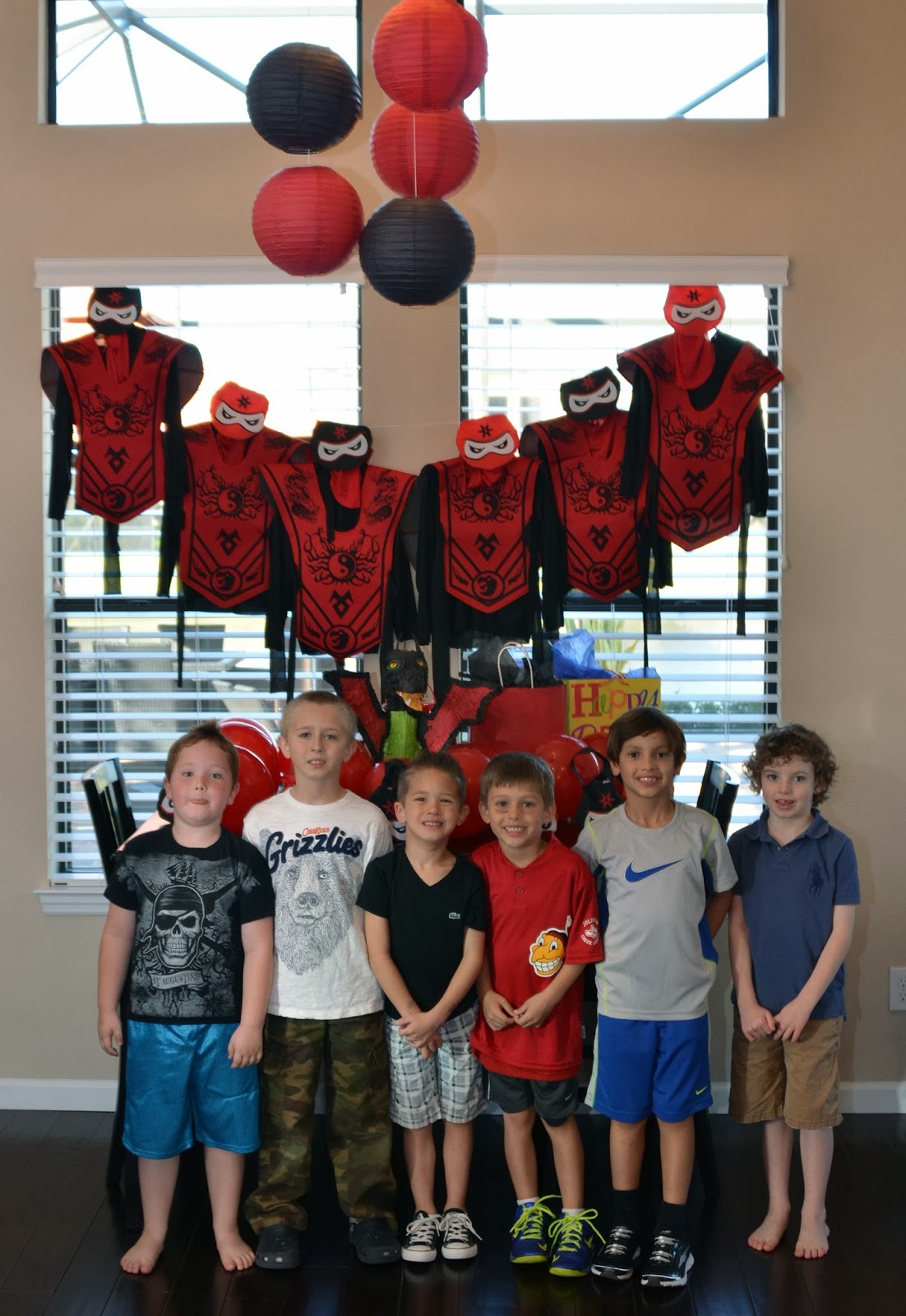 Then everyone put on their ninja gear! 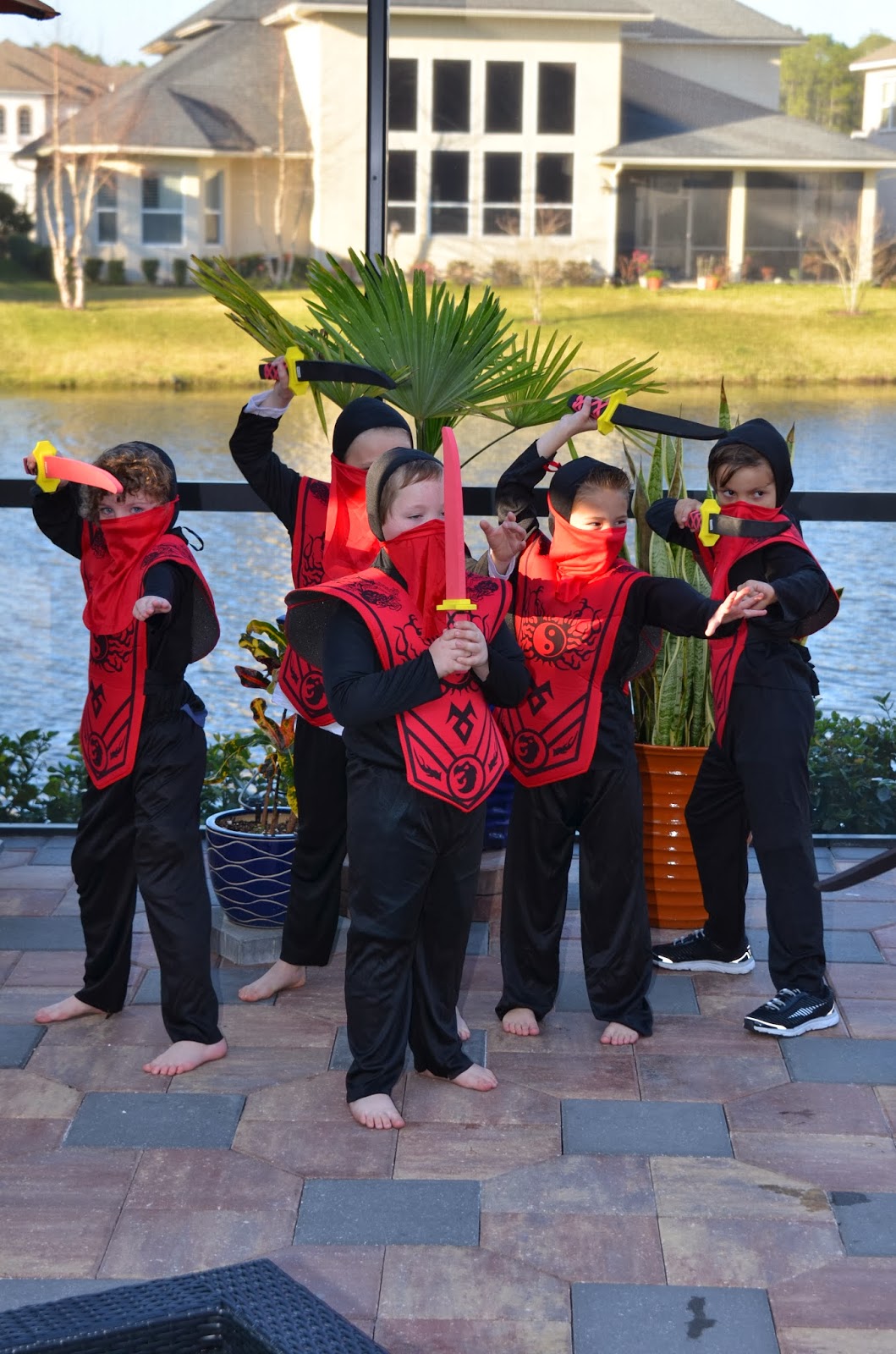 After they got all suited up, they started off just running around outside fighting. It devolved in to a chaotic free-for-all and there were some kids that ended up getting smacked pretty hard in the face. We didn't want to ruin their ninja fighting fun, but decided we should have some rules. To make it interesting, I set up a tournament where the winners of one-on-one fights could progress to see who was the ninja champion. Boys are so competitive and they took it very seriously. I love the pic where Connor's getting ready to fight Trevor. You can really see their focus in their eyes, while Danny and Adrian are watching intently just moments before the fight starts. 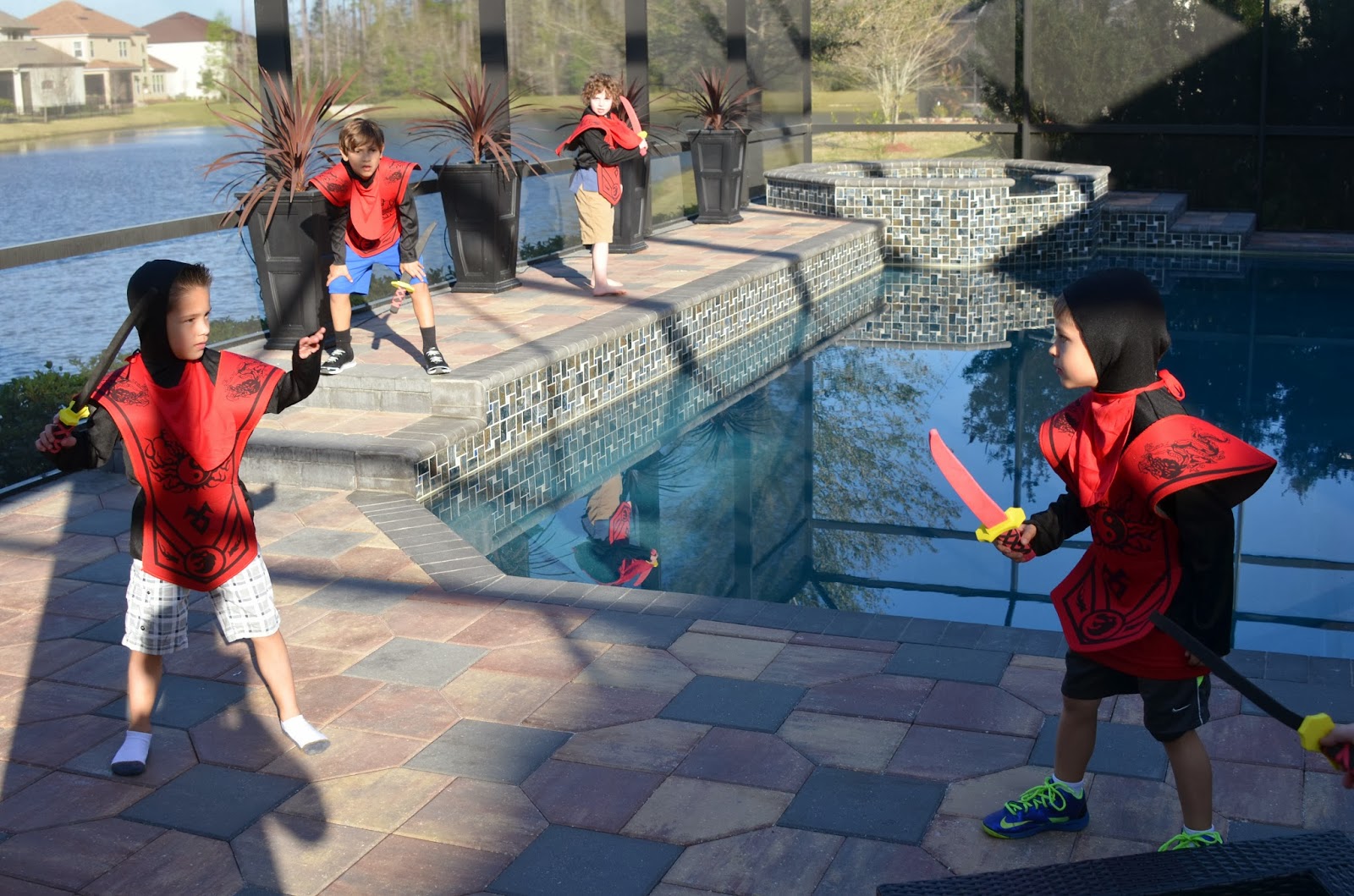 The first tournament went pretty quick and since everyone gets cut in each fight it's pretty easy for me to fix the fights and call them the way I want. I let Connor win the first tournament since he was the birthday boy. He did fight well, but I'll admit I played favorites. Connor, if you're reading this, sorry buddy it's true. Danny cut you at the same time you cut him in the final round. Anyways, we had lots of fights and I tried to be sure everyone won a few. 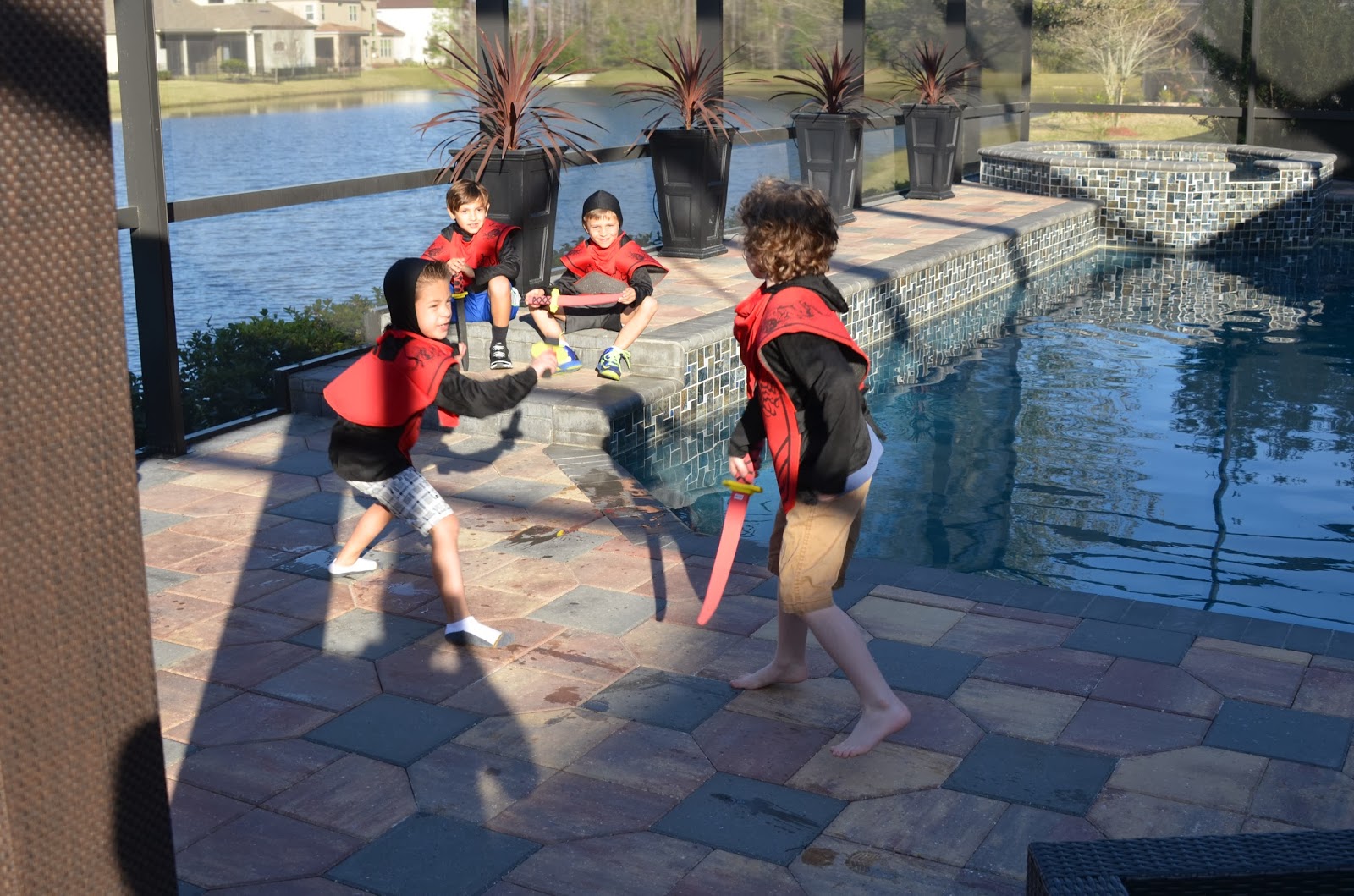 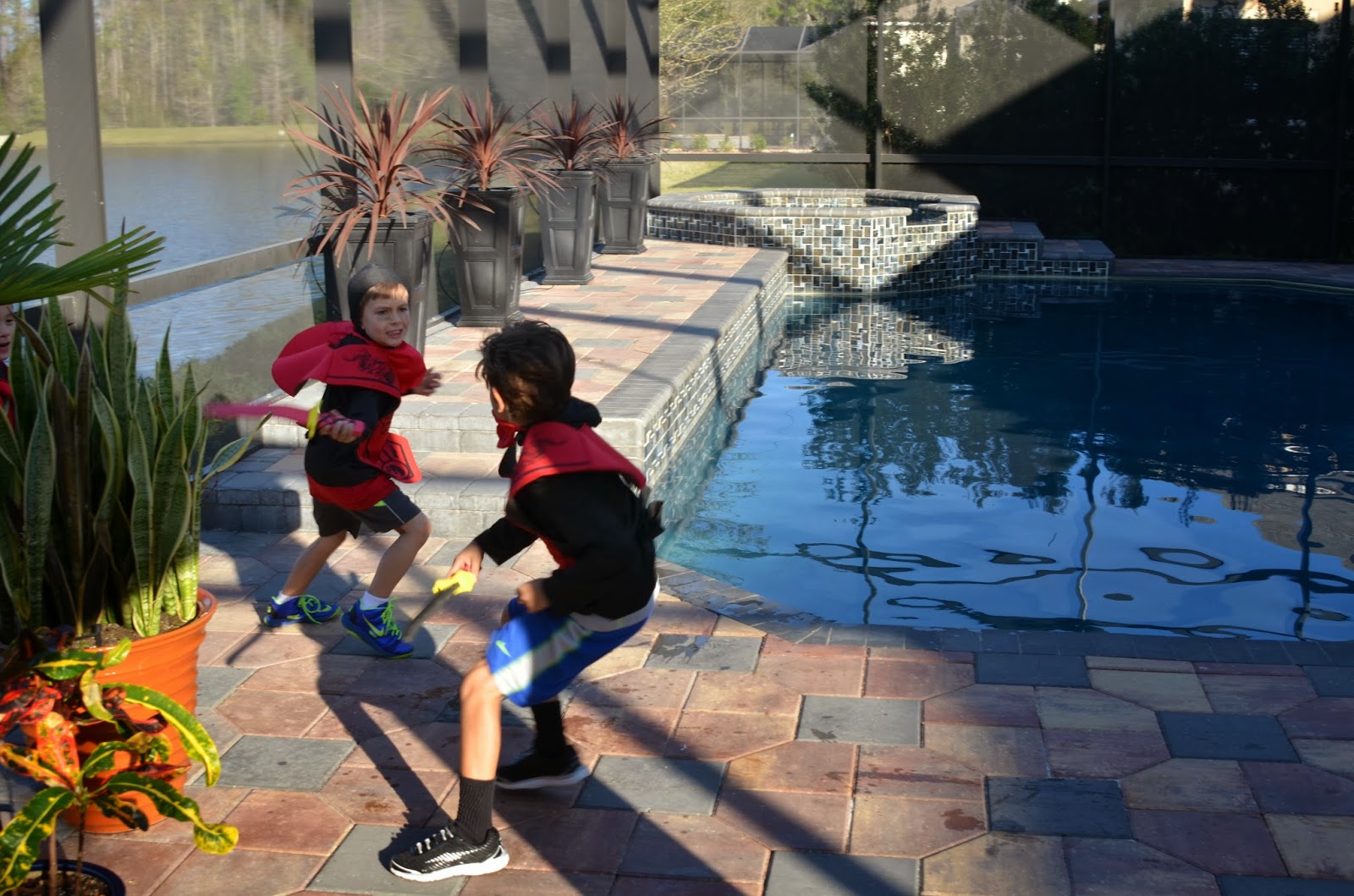 After I got tired of arguing with the kids over who got cut first, we went to their favorite part of the party. I'd set up a couple ninja obstacle courses upstairs. The first one we did was the spider web course. I'd tied off strings across the catwalk and they had to negotiate the course without knocking down any of the strings. I wanted it to be fun, but also challenging so they wouldn't be too bored with it. For a while I thought maybe I'd made it impossible. There were lines crisscrossing across, diagonally, and if you weren't aware of all the lines it was very easy to knock one down. In the end, all of the boys that took it seriously made it through, but not before messing up at least 4-5 times each. 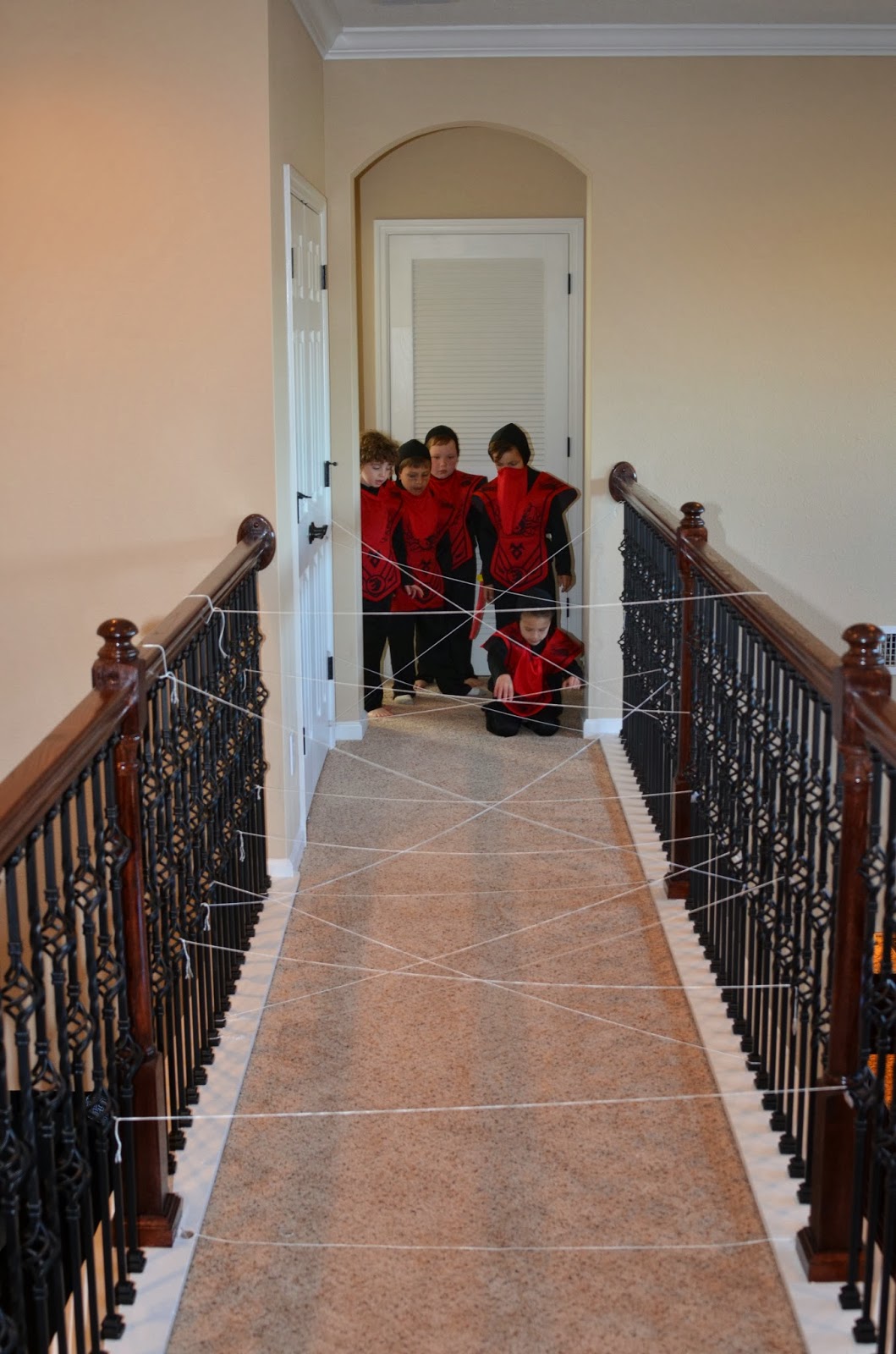 I was hoping the kids would like the spider web course, but I was really surprised how much they loved it. They couldn't get enough of it and most of them went through it at least 10 times each. It was exhausting resetting the strings, but it was awesome seeing how much they enjoyed it and how much satisfaction they got when they completed it. 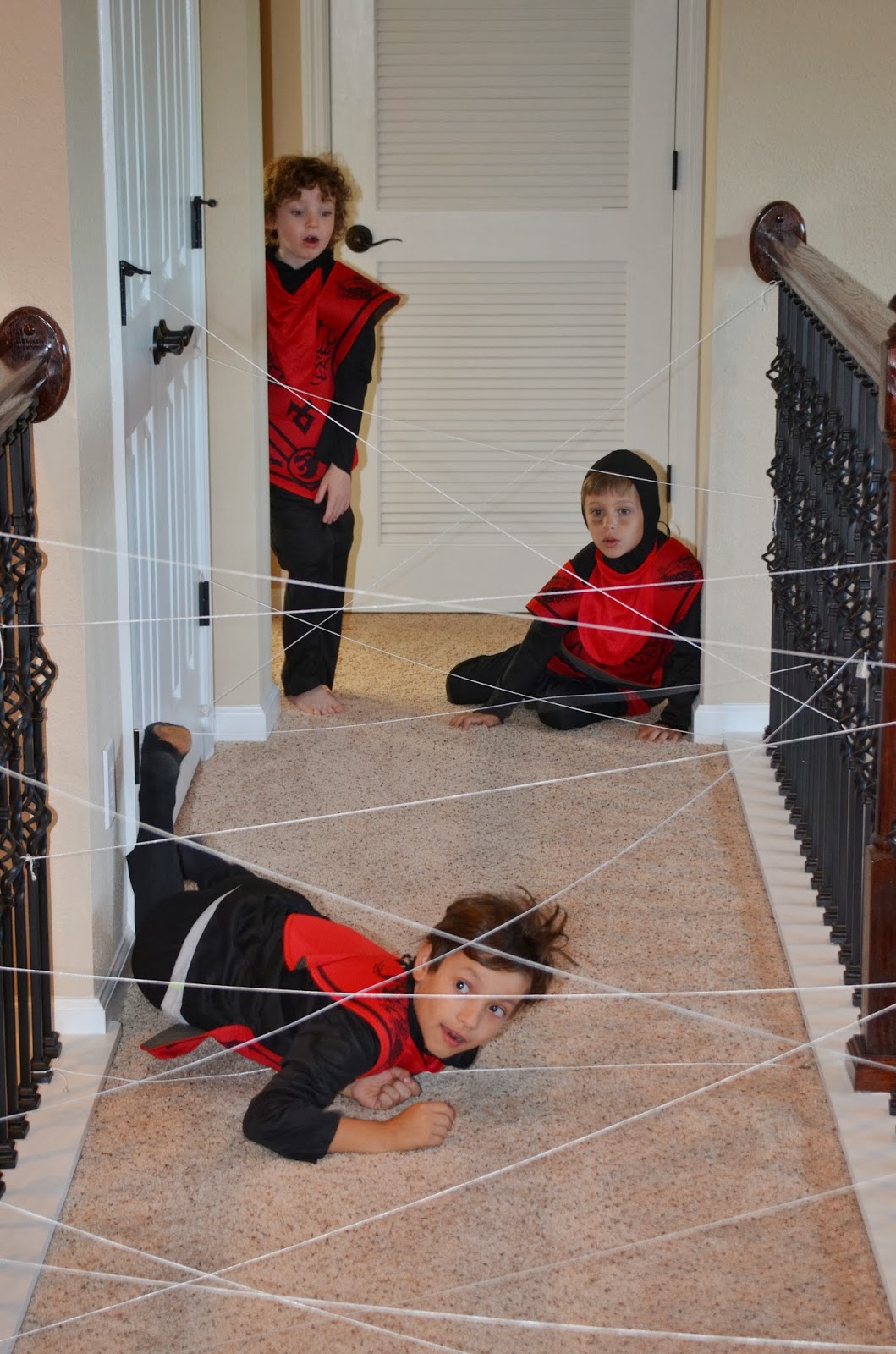 After they all went through the spiderweb course a few times, we moved on to the jump course. It is more similar to the kinds of obstacle courses I've set up for Connor in the past, but I made it a little more sturdy than in the past. We borrowed a balance beam from one of our neighbors and I bought some plastic stepping stones that are intended for jumping on. They don't slide like some of the things I've used in the past and are a little more challenging and sturdy. The jump course was challenging, but all of the boys got through it after a few tries. Connor was very disappointed it took him three tries, but he did make it through.

After we worked up an appetite it was time for pizza! 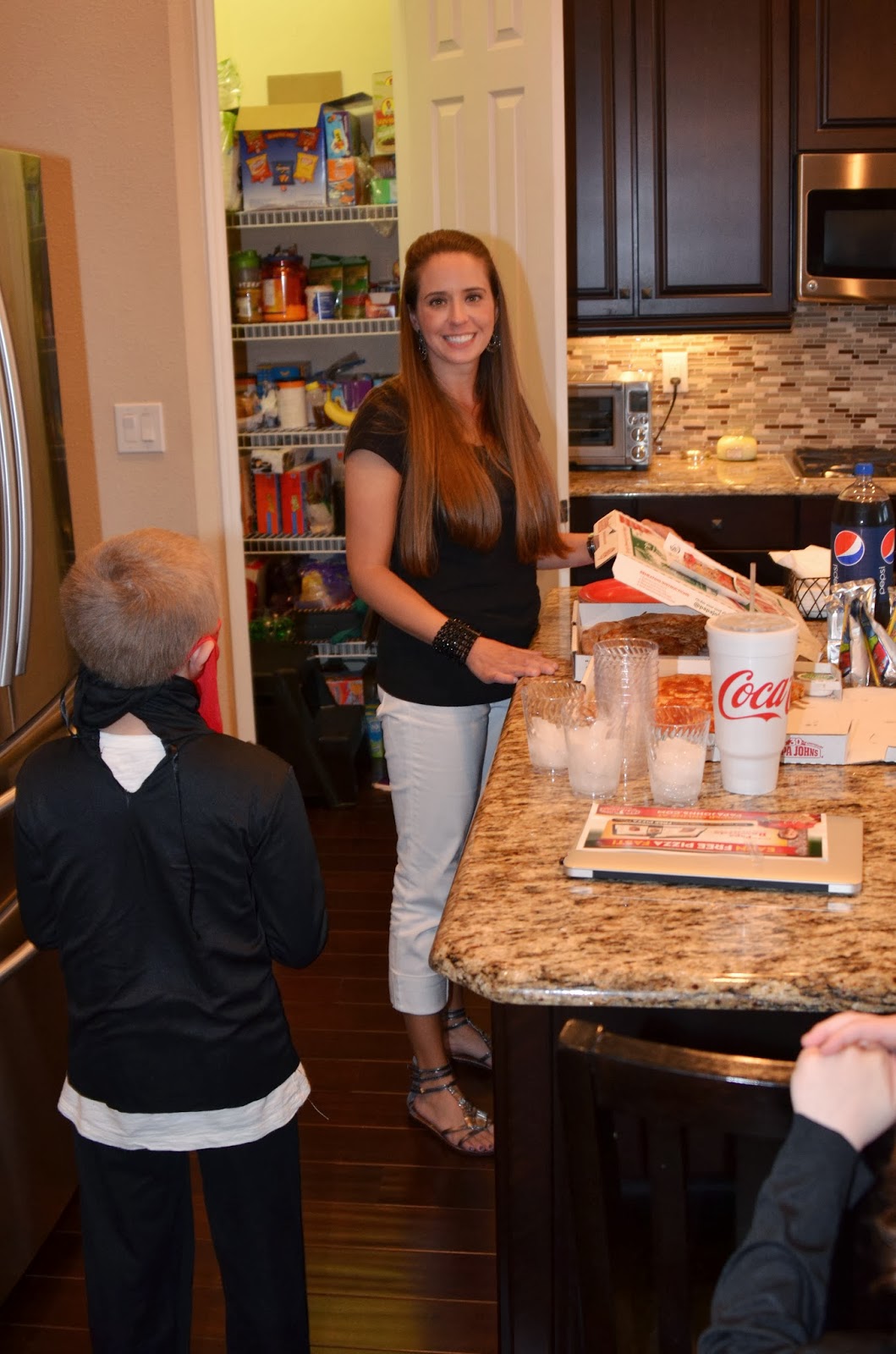 It was beautiful out all day, so the kids ate outside. 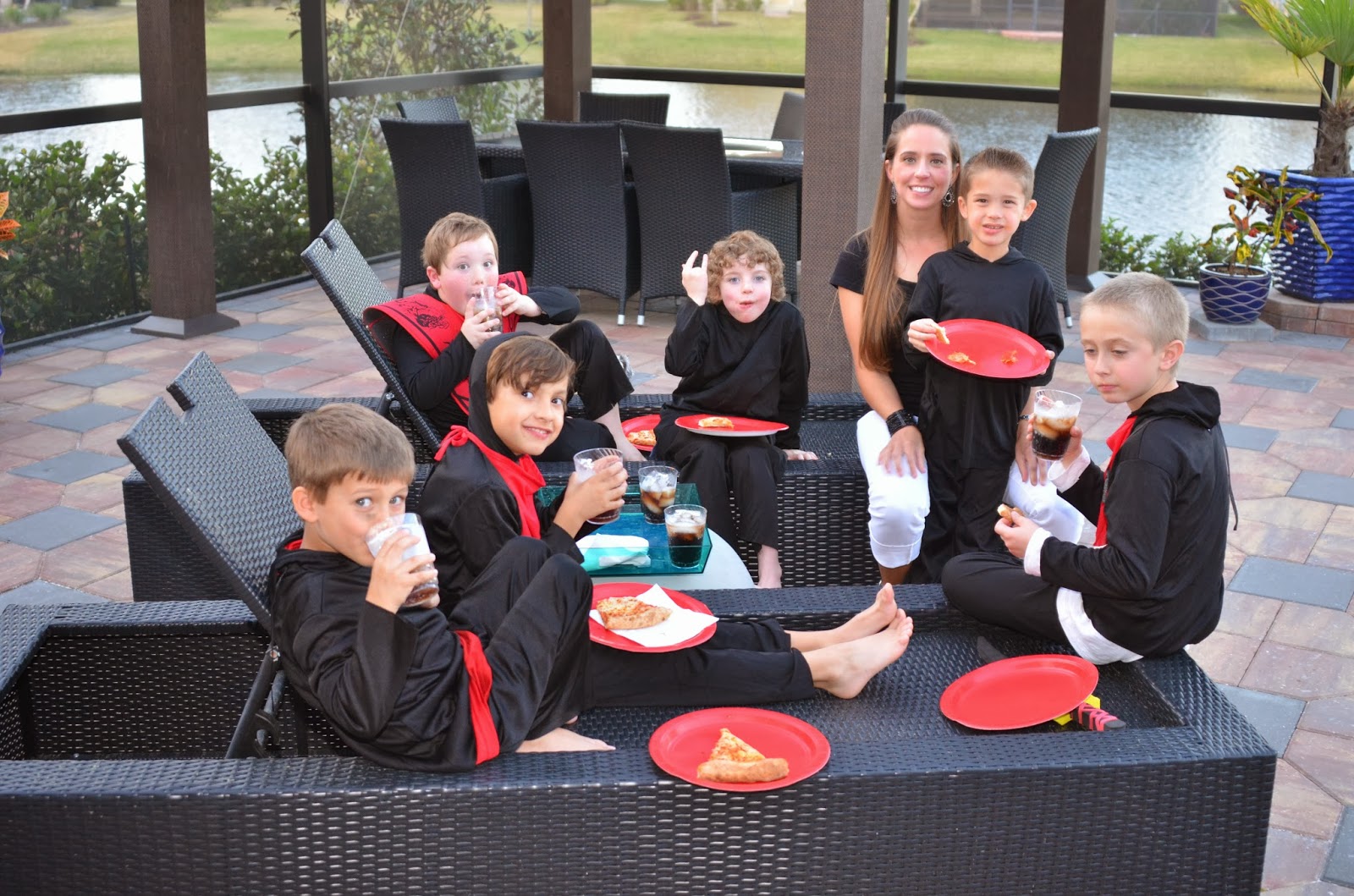 After dinner, Andrea lit the candles on the cake, we sang Connor "Happy Birthday" and he blew out his candles. The cake was yummy with vanilla tie-die on top and chocolate on the bottom. As usual we had way more cake than we needed, but it's worth it and we always enjoy seeing what Andrea comes up with.

Most of the boys snarfed down the cake and went back inside right away to play on the obstacle courses some more. Adrian was sitting outside by himself and Andrea sat down with him and asked him if he was having fun. Adrian said yes, then paused for a second and followed it up with "This is the best sleepover ever!". Although Danny had his birthday party just yesterday, he told me that he wished he'd had ninja obstacles instead for his party. It was nice to hear that the boys were having a good time.

Once it got dark, we decided we'd let the kids swim. We heated up the hot tub and the we all goofed off in the pool together. The boys had a splash/bellyflop competition and I was the judge. Andrea took some pics and some good videos of us. 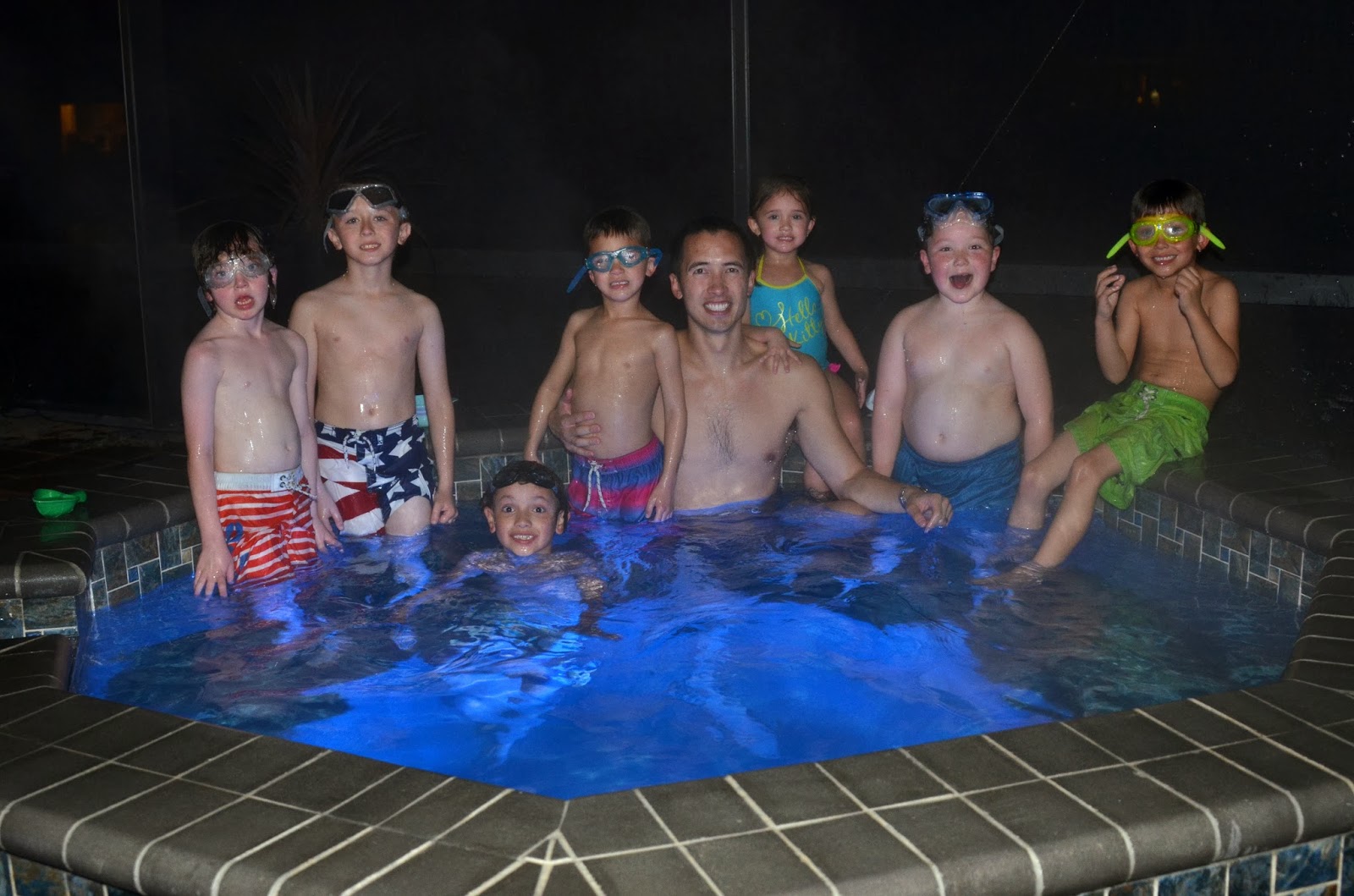 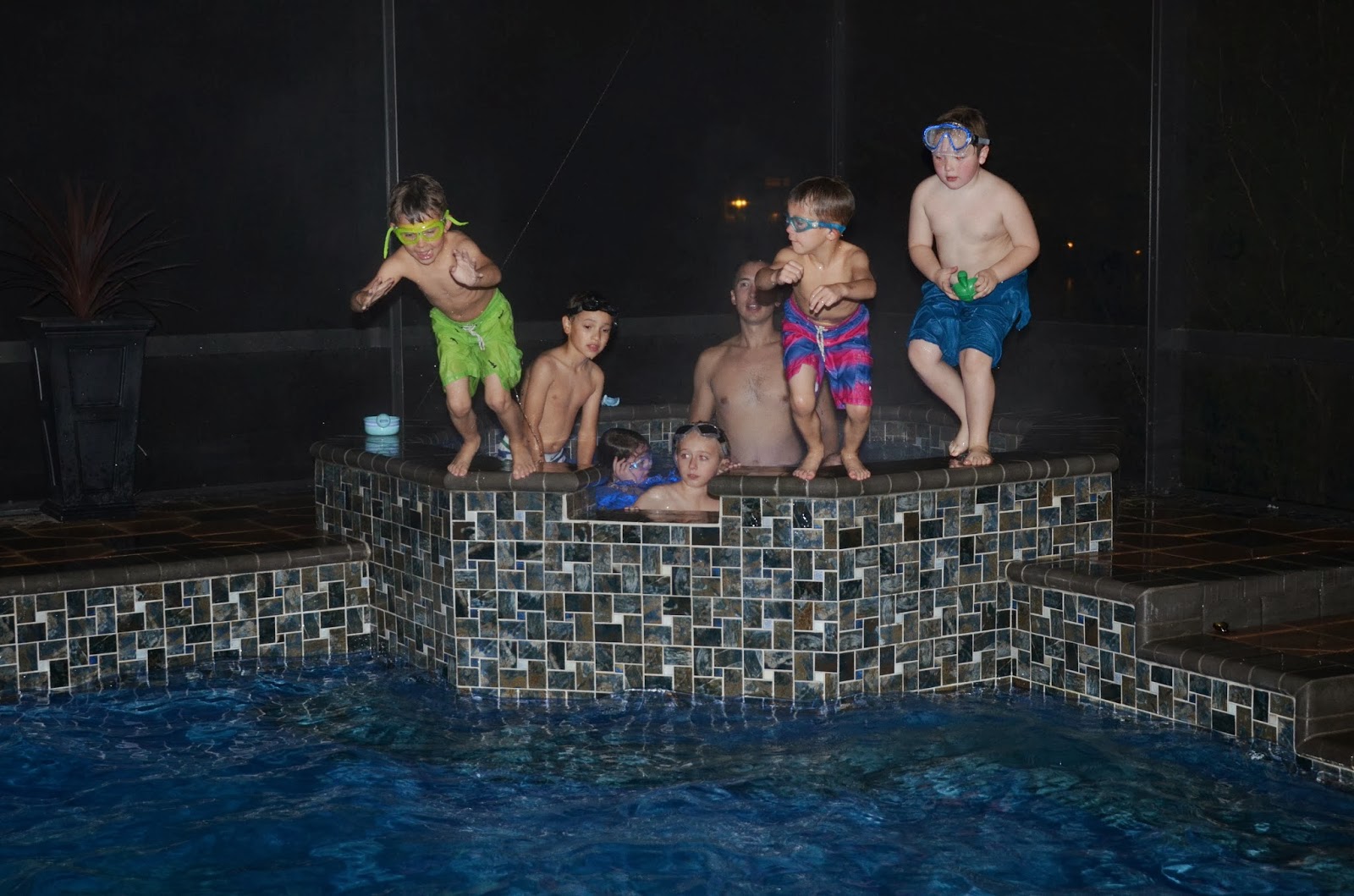 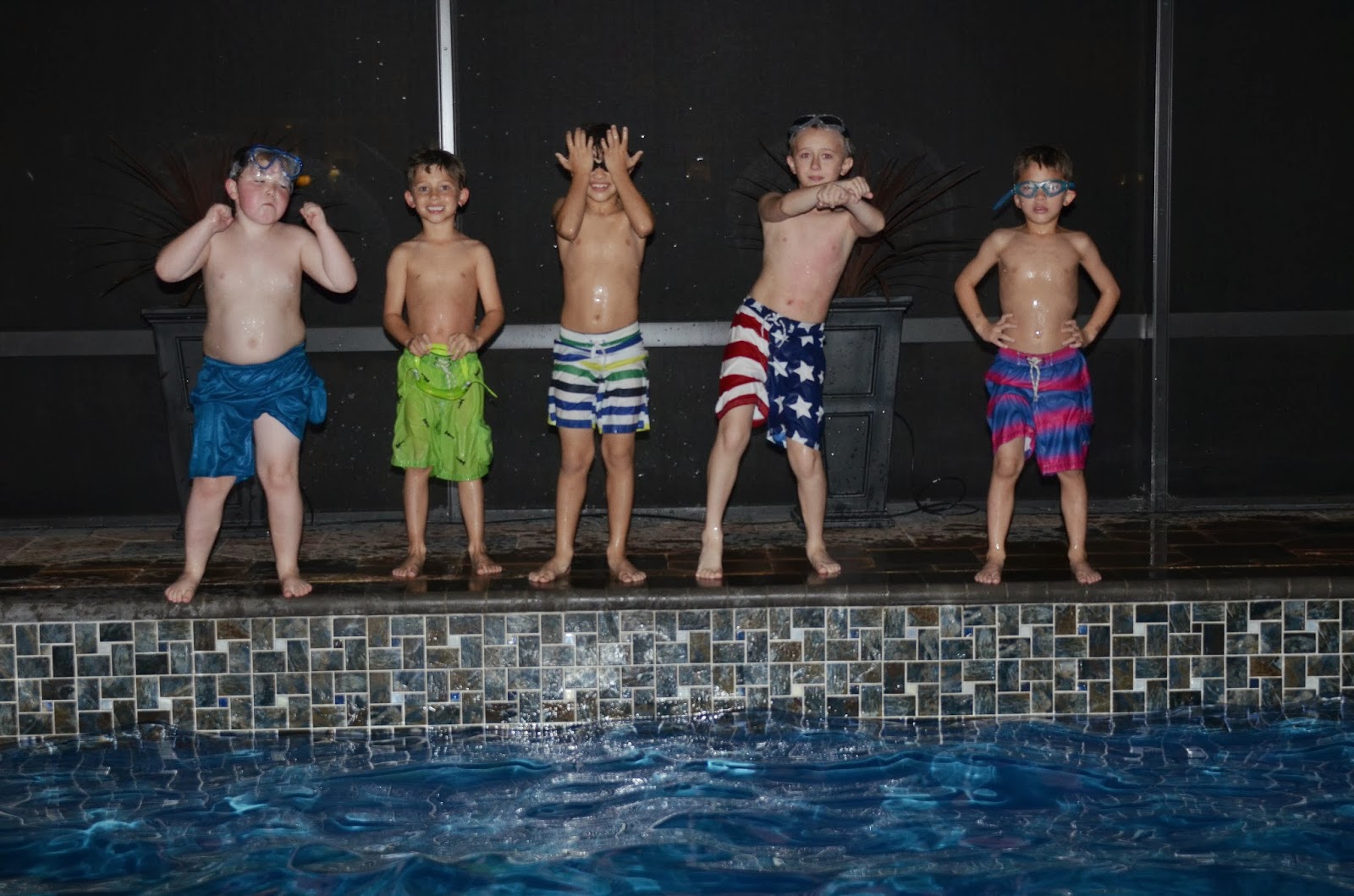 After we were done sleeping, the boys played a little longer and then went to bed. As we expected, it took them a few hours to settle down, but finally at about 11:30pm they all fell asleep. I snapped a few pics of them sleeping and now I'm going to bed too! 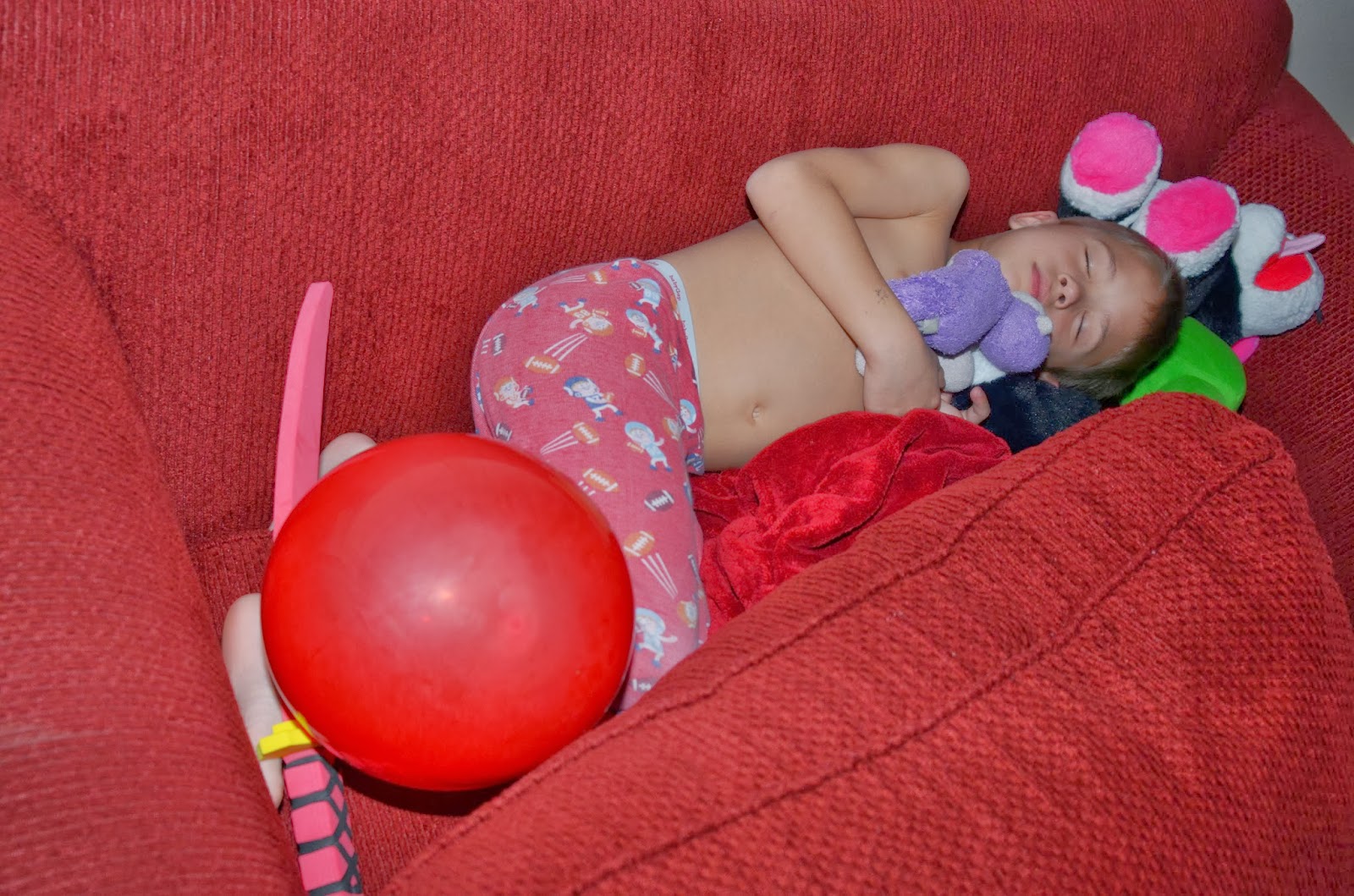 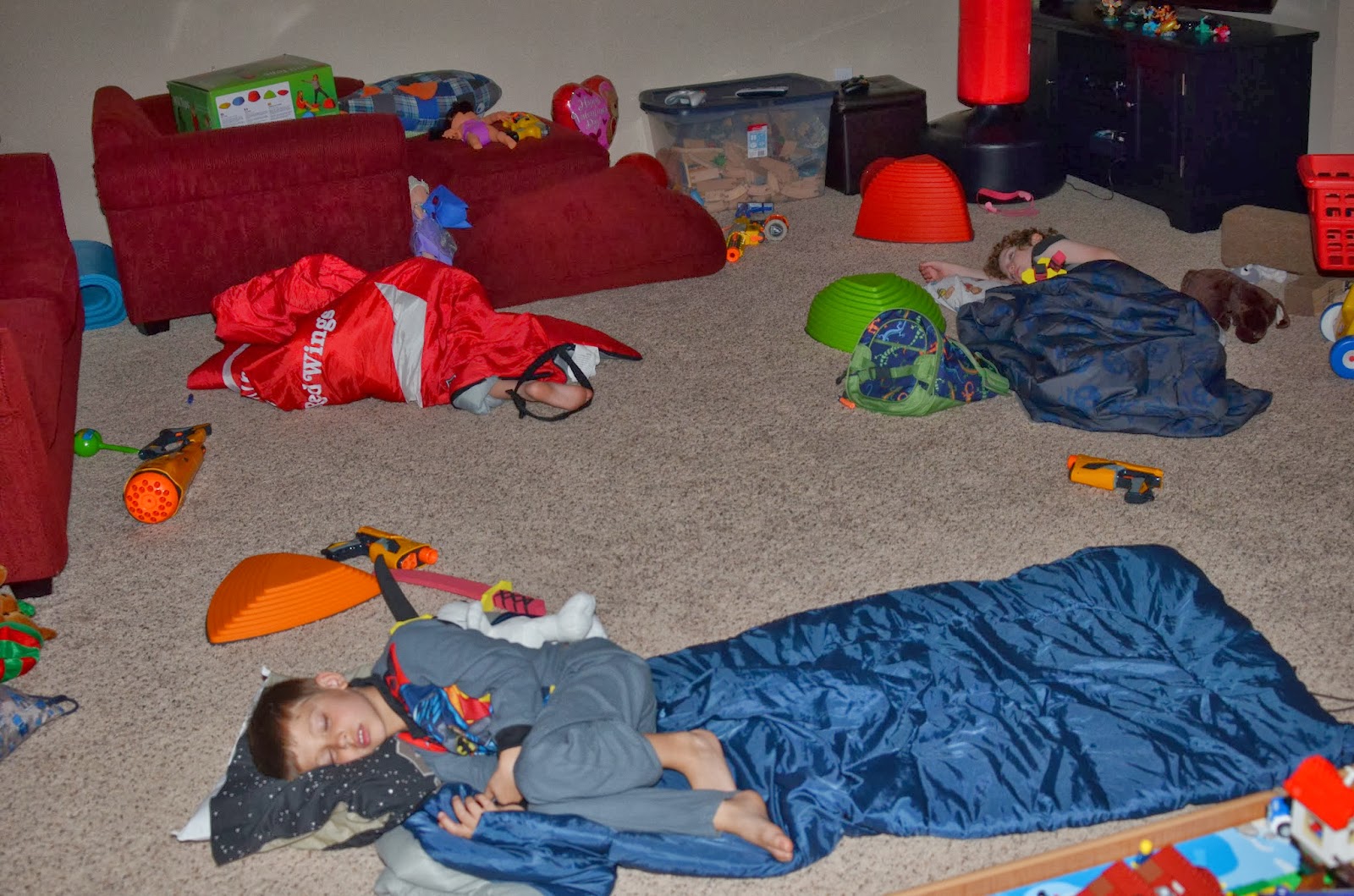 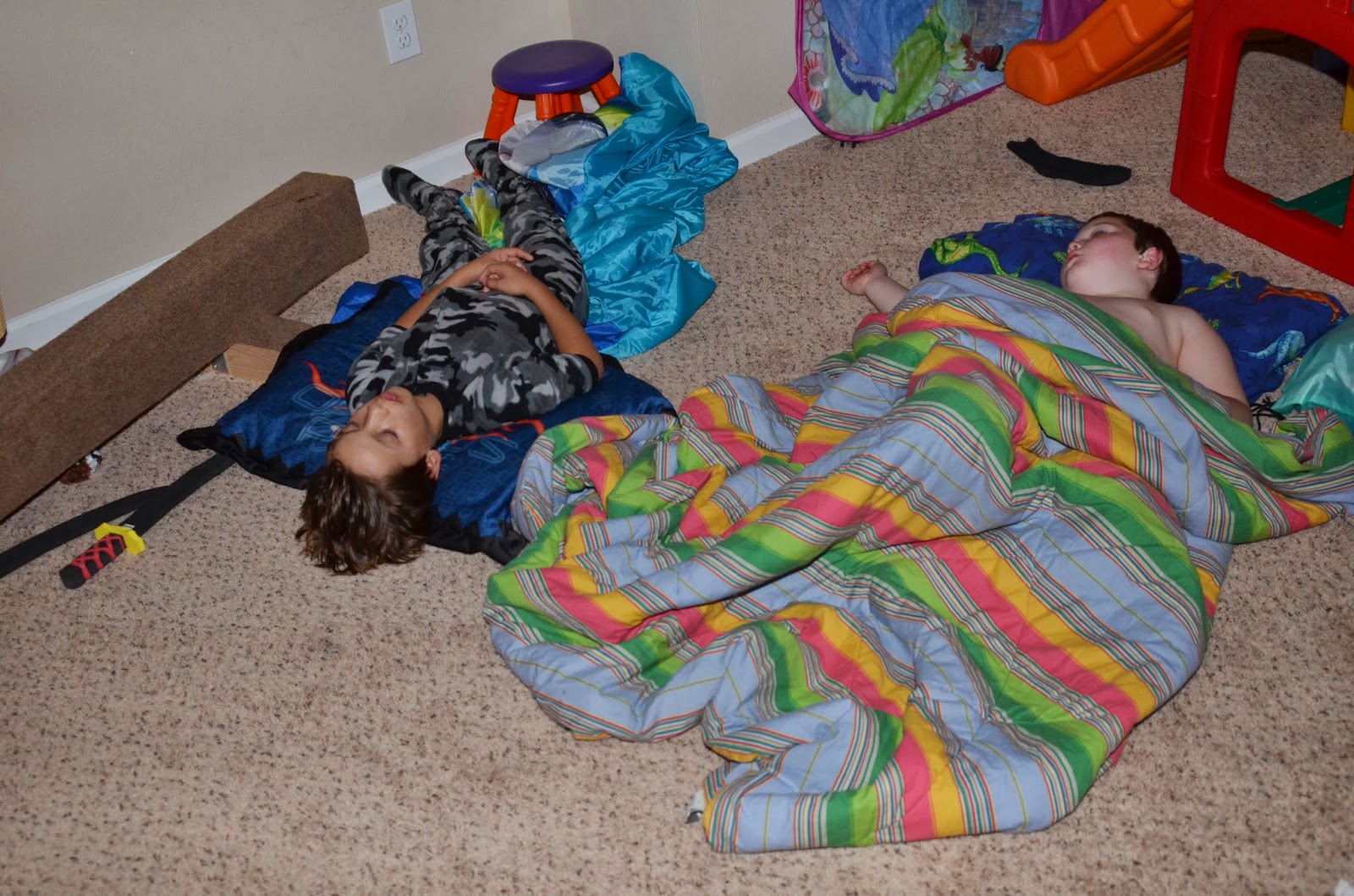 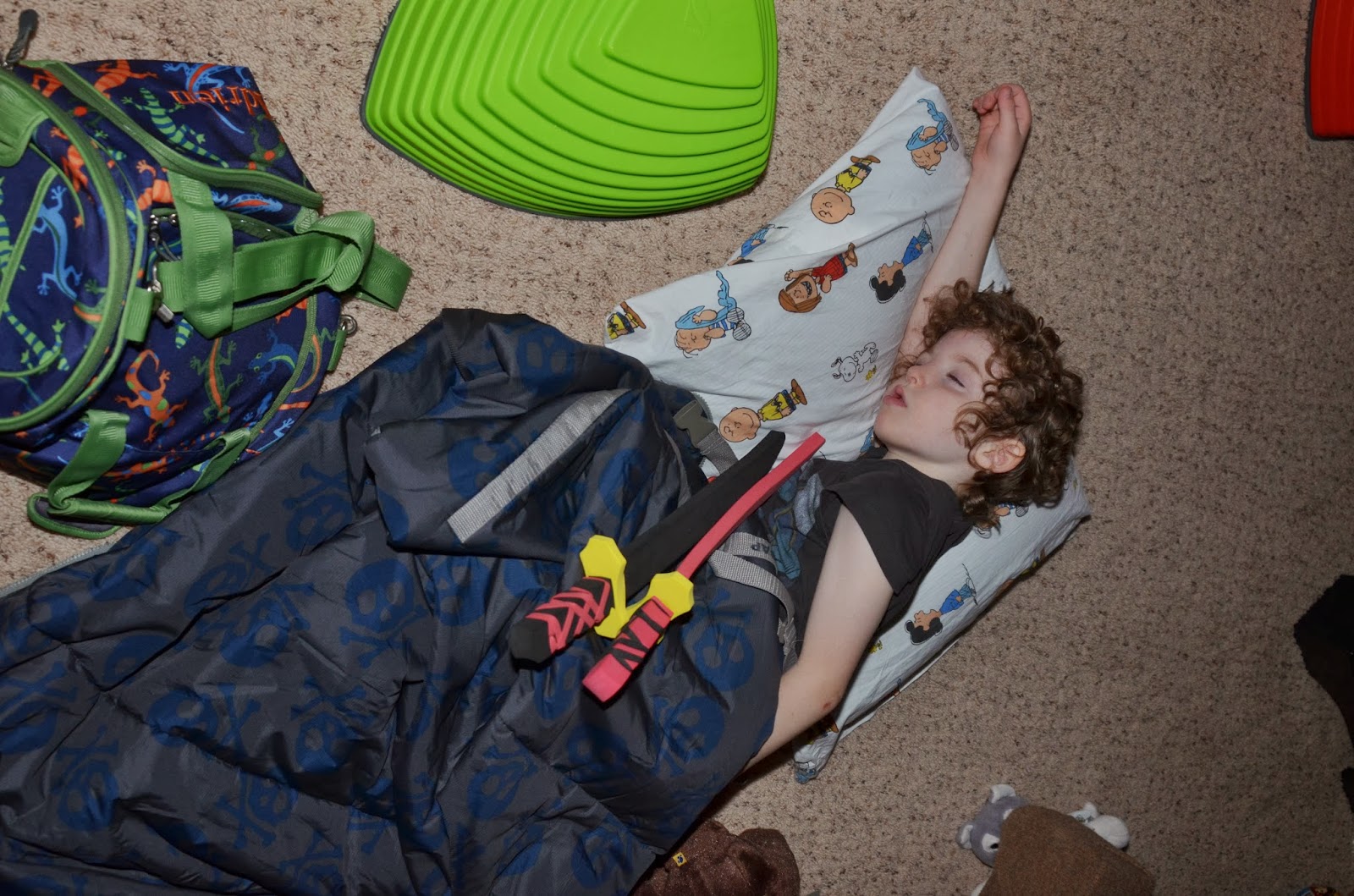 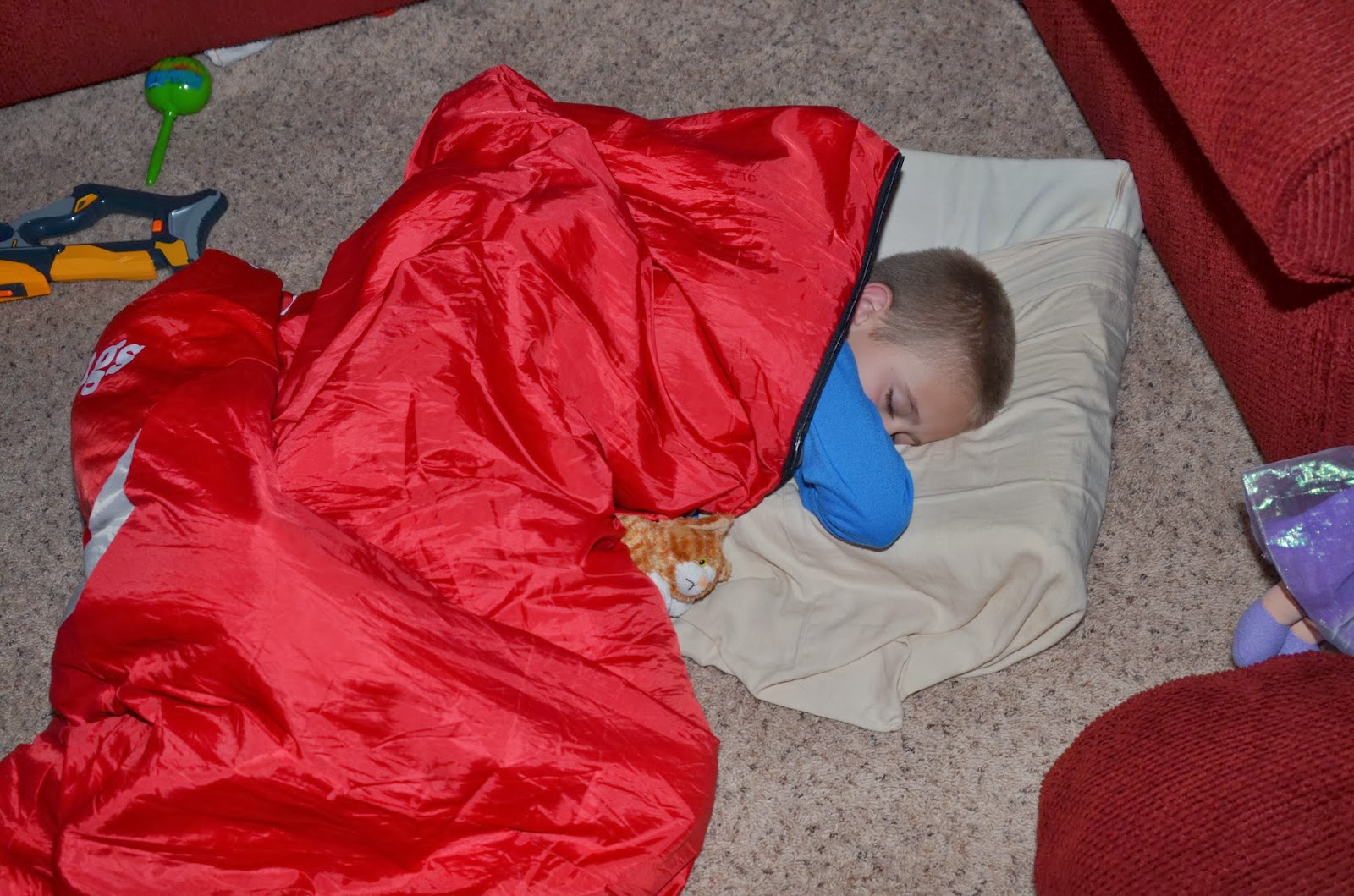