Destin Florida trip with the Gobles

On Friday, July 25th, we drove to Destin Florida for a mini-vacation. One of Andrea's friends from highschool had been there recently and Andrea decided to look up some places to stay in the area and got pretty excited. We decided we'd give it a try and Andrea booked a condo in the Majestic Sun tower. Each unit is privately owned, and she found a pretty nice two bedroom unit that looked well kept and nicely decorated.

The drive was a little over five hours and the drive down was pretty easy. The kids were very good in the car, we only stopped once, and the iPads lasted the entire drive. 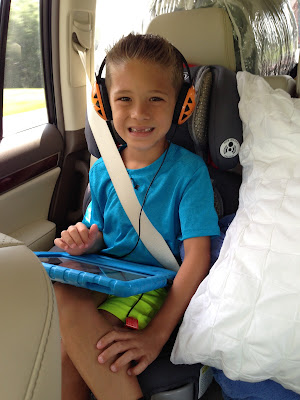 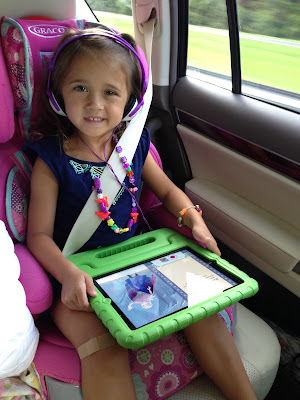 When we got in town, we got our keys and ate at McAlister's deli. 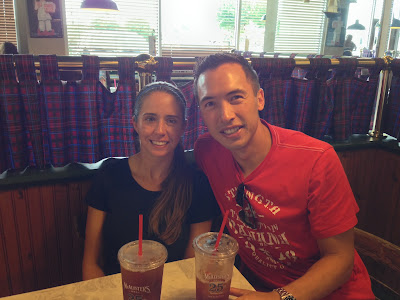 We went to the beach for a little while the first day, then we got ready for dinner and walked to Whale's tail which was very nearby and right on the beach. The food and service were just ok, but the view was great and it was very convenient. 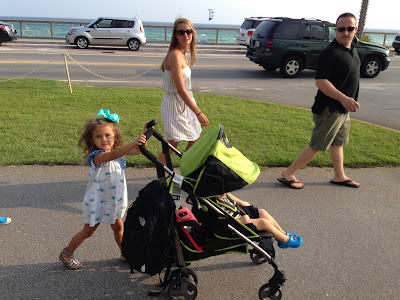 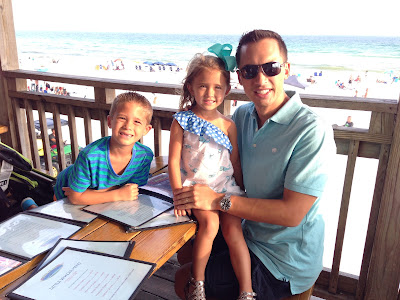 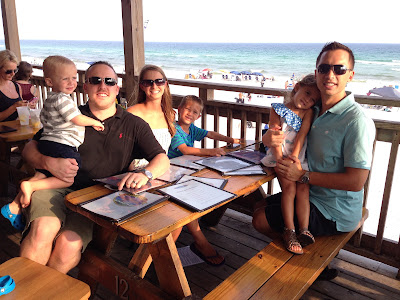 Graydon enjoyed staring out in to the ocean and watching the kite-surfing guy. 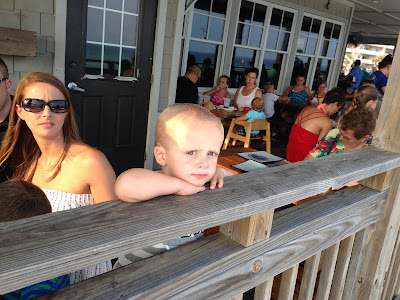 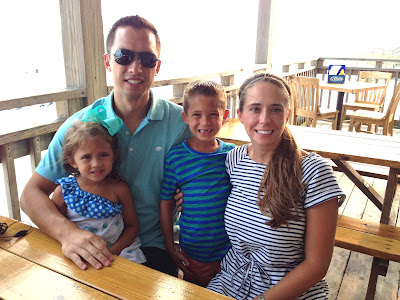 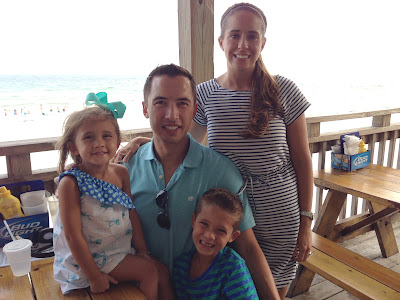 The next day we decided to do some fun stuff in the area. We started off at a mini-golf course that was nearby, it's one of Connor's favorite things to do, so it was really for him. 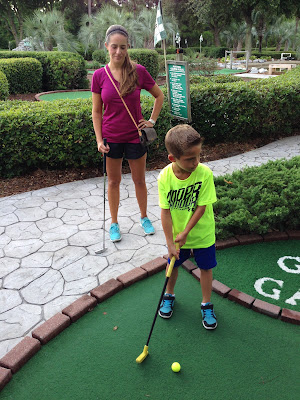 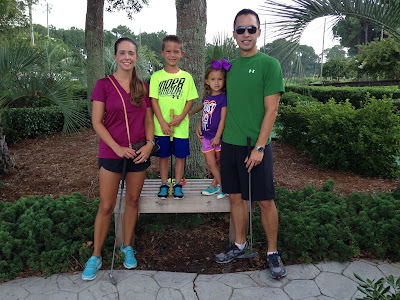 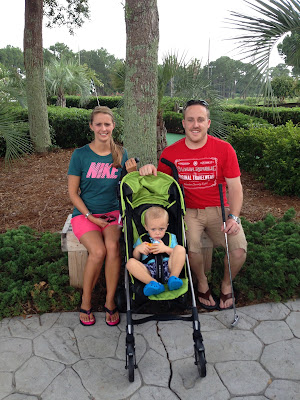 We were doing really well until we got to a difficult hole. Andrea did the jump pretty well and her ball almost went right in the hole, except it was going a bit fast.


Connor really struggled. He couldn't hit the ball straight and hard at the same time. It would either go wild, or go in to the water. He got really frustrated.

One of Connor's many tries.


After golfing we went to the Baytowne Wharf to do some of the activities they had setup. 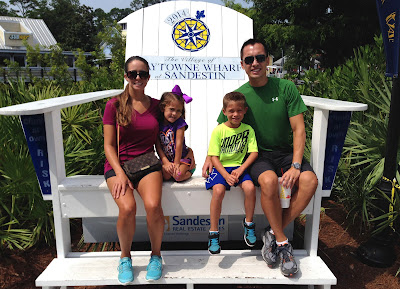 There were two obstacle courses, where you're clipped in to a safety harness and negotiate the obstacles by yourself. They were pretty neat since you had a lot of freedom to choose which obstacles to do at your own pace and you could play as long as you liked. Connor was very intimidated by the big obstacle course, but after he saw how little the other one was he decided to try the big one.

The smaller obstacle course was perfect for Paige, she really enjoyed it and got pretty brave after a while, going very quickly across towards the end. 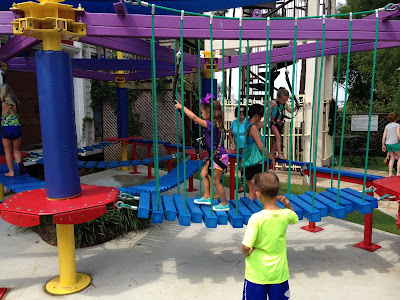 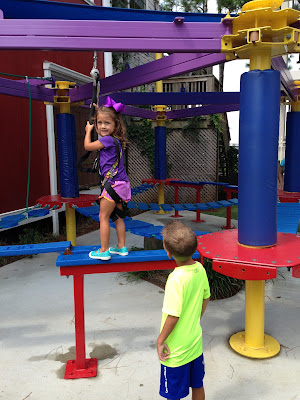 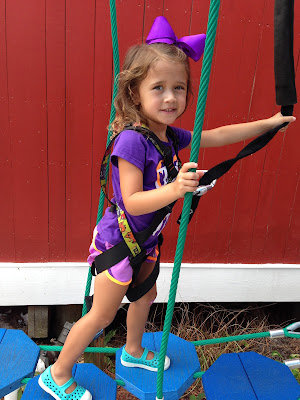 I took Connor up to the big obstacle and we got all clipped in. At first he only wanted to do the lower level. I got him on a few of the bridges, but his safety rope kept getting hung up since the plastic piece wasn't sliding well in the grooves. I had one of the workers switch it out with another one and then we got going pretty well. 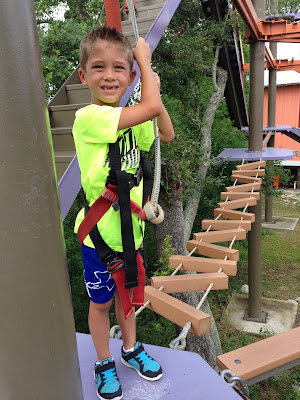 Eventually we got up to the second level and Connor really struggled with his fear of heights. The bridges were pretty long and he was shivering as he made his way across. 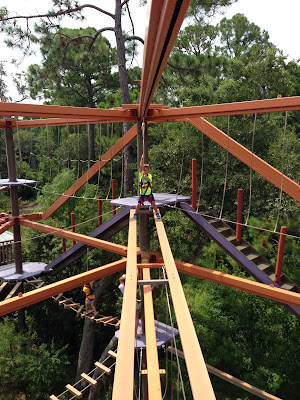 Connor definitely did the best on the rope bridges. He loved grabbing them with his hands and I think it was a lot more stable for him since he had more points of contact to grab on to. 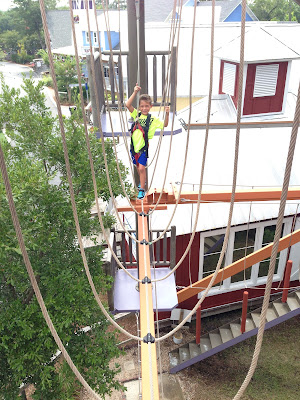 He was too scared to go up to the top level, but I had to go up and ring the bell. 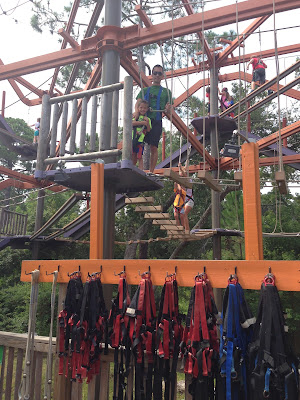 I was very proud of my little man for working so hard and rewarded him with a big round dinosaur from the gift shop. 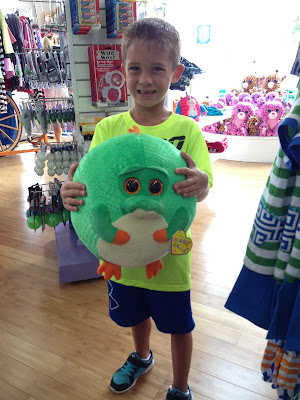 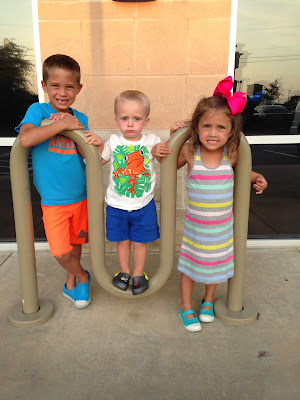 After our hot day out in the sun, we went back to the condo and got ready for the beach. 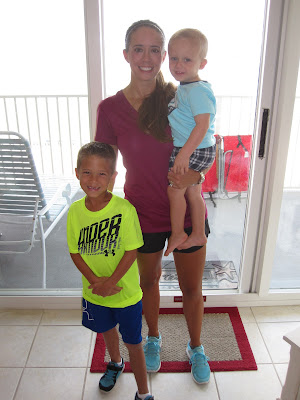 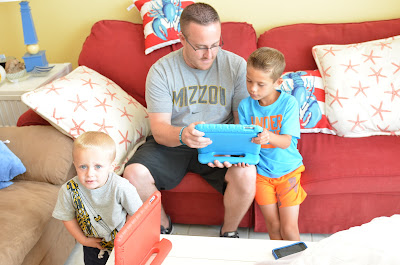 We spent a lot of time on the beach. The first day, there were tons of seaweed floating in the water and we were pretty surprised and disappointed. The sand was beautiful and white, but the water was green and you could feel seaweed scraping against your skin. Yuck. Thankfully the second day there was less and eventually most of it was gone and the water was beautiful and clear.

Connor and I threw around his football a bit and since he was such a good boy, we got him a little surfboard to use in the shallow water. Connor was too scared to go out to the deeper water, even after we got a fun green raft to float on. He was very happy to stay in the shallow water and worked hard to figure out how to use his board.


I snapped a panorama of Andrea and Amanda with our condo in the background. We had a great view from the 7th floor.

The beach was fun, but after a while you got hot and gross from all the sand. The pool at the condo was great, and very refreshing after playing in the water so long.

Paige had to pose for me in her pretty swimsuit, of course. 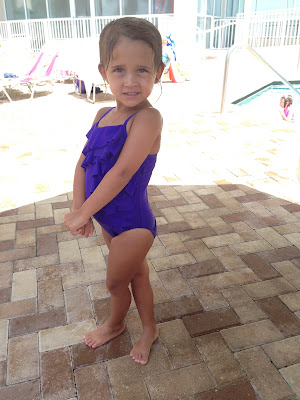 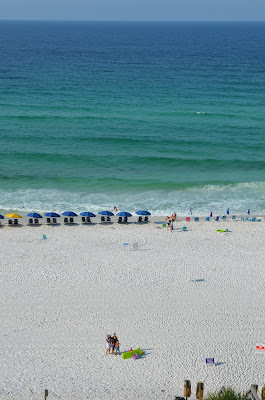 One night, we saw a wedding on the beach and Andrea watched with the kids. Later that night, the kids were playing in bed and when Andrea asked them what they were doing, Paige said "We havin a weddin!" Paige had pony wrapped up in her blankie as a dress and the kids carried out a fun ceremony with them. The kids played very nicely together. 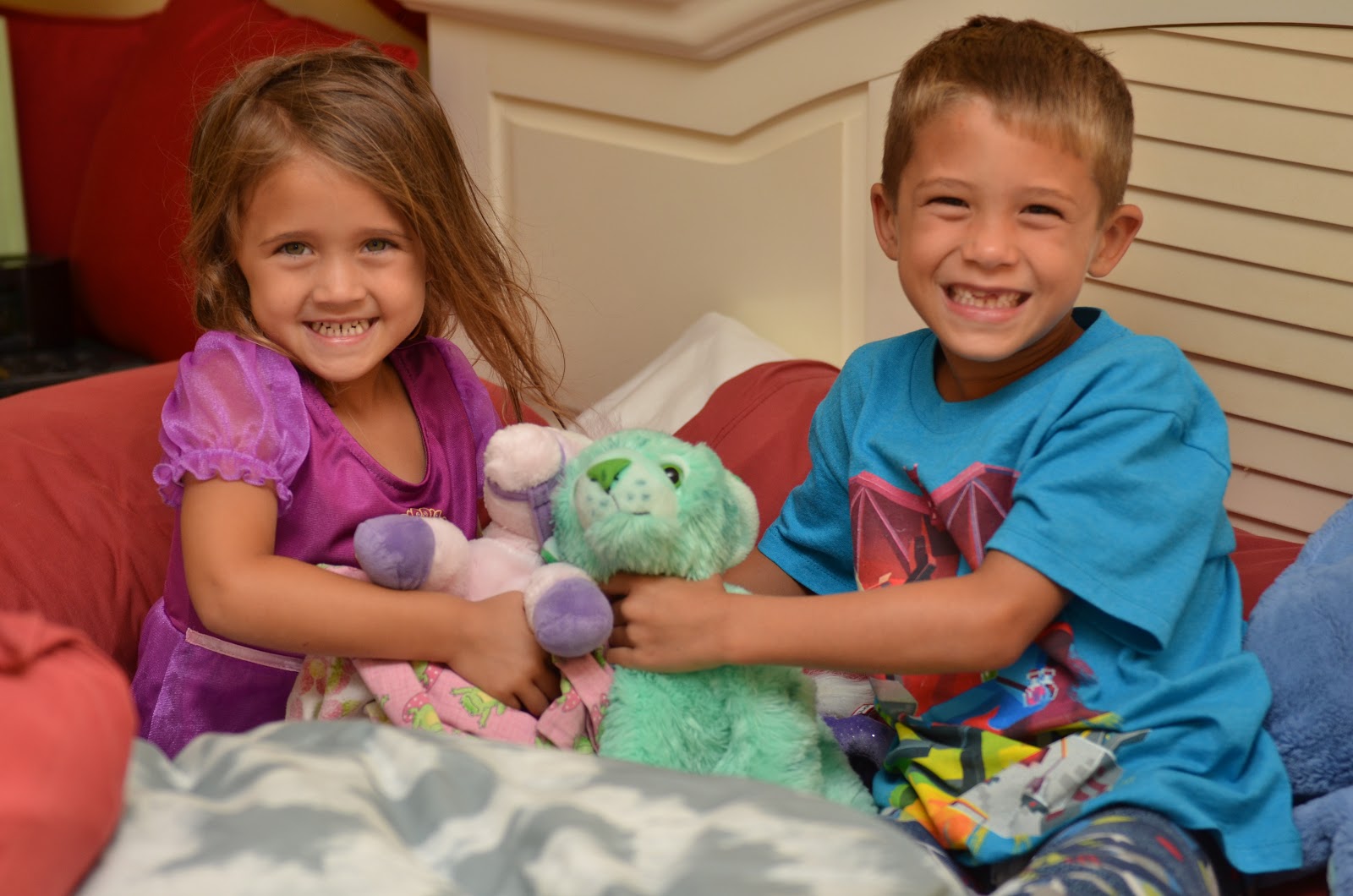 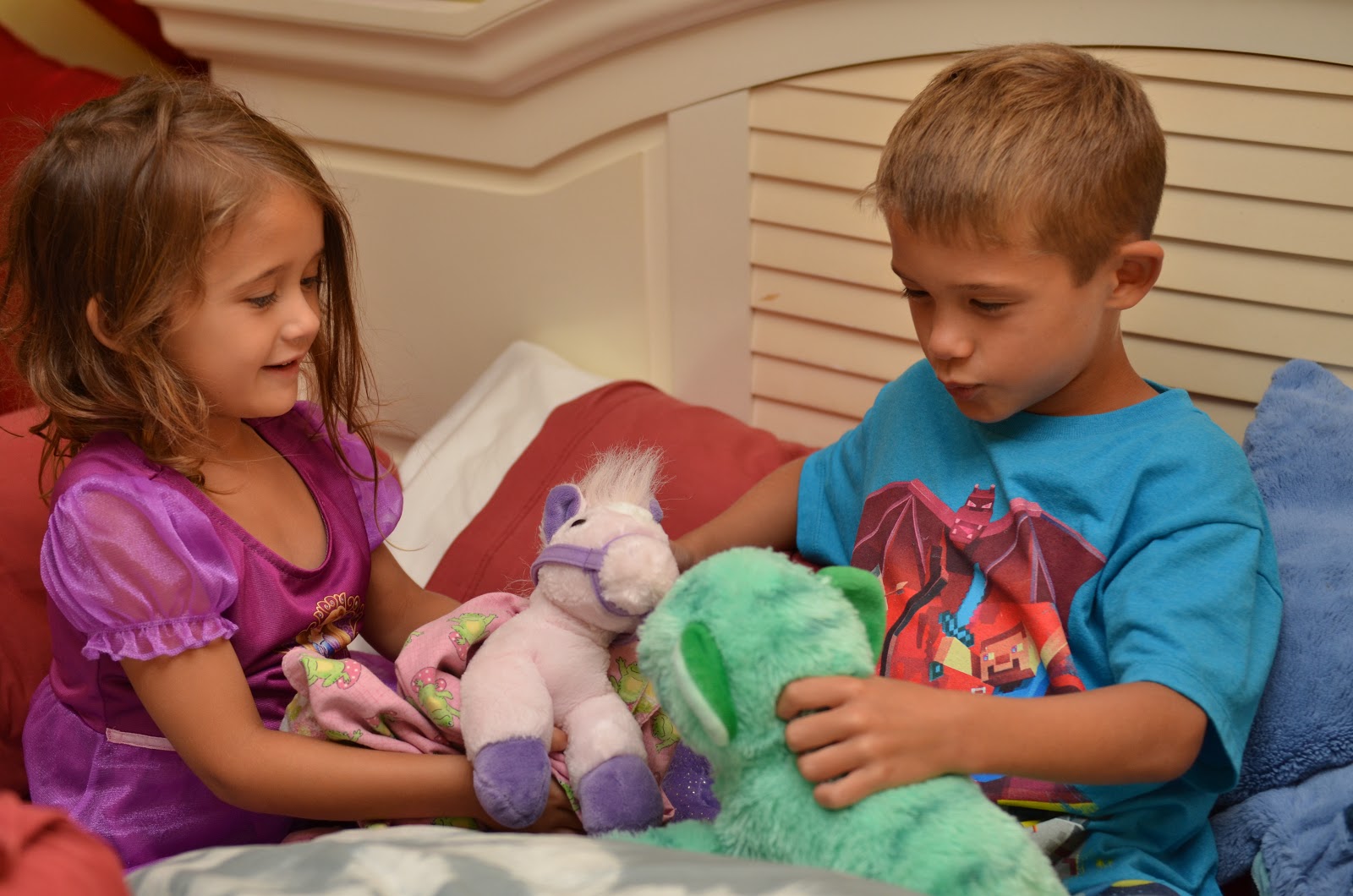 On the drive home, it was tight. Ryan had gone home a little early on his own so we had to squeeze in Amanda, Graydon, and all their things. At one point as I was packing everything in, I really didn't think it would work. There was barely enough room and I don't think it was comfortable for anyone. 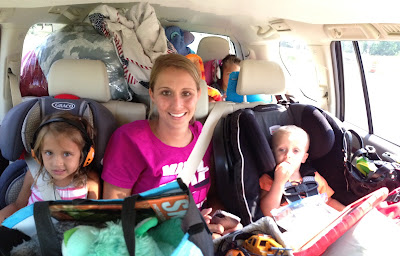 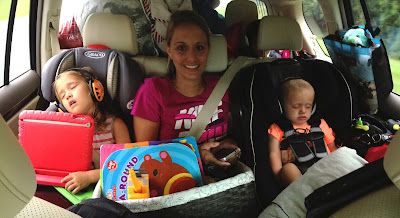 At our stop for gas, Paige couldn't find her shoes and she had to wear one of Connor's. She was pretty grumpy, but we took a pic anyways.


Thankfully we all survived the trip home, and despite the discomfort, it was a great trip. Next time we will have to find a place with at least one more bedroom, and maybe a bigger vehicle. Overall though, it was an awesome trip and we're so happy that we live close enough to fun places that we can visit. Big thanks to Andrea for putting it all together for us!
Posted by Shawn Vernon at 9:52 AM