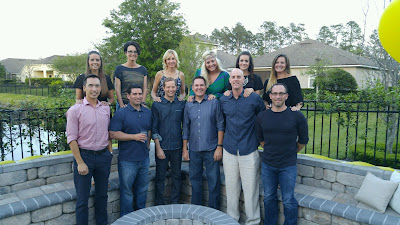 Our friend Rachael had her birthday party on Saturday night. Chad, her husband, organized a surprise party and had a chef prepare a fancy dinner for everyone as well. Rachael knew some people were coming together to celebrate with her, but was somewhat surprised when she arrived at Anna's and we were all waiting for her.

The food was fantastic, and presented nicely. 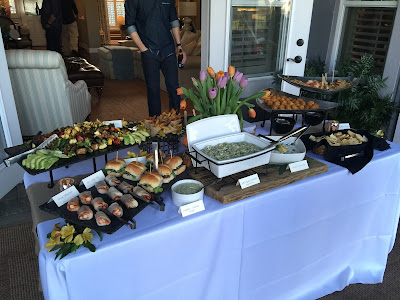 Chad decided we would also do some fun games. First, each couple had to balance a wiffle ball between heads while navigating around the room to grab and eat some chocolates. It was harder than we expected, and especially hard for me because Andrea thought she needed to drop her chin so we could get the ball between our foreheads. I ended up having to squat down to keep the ball in place, but we did successfully complete the challenge. 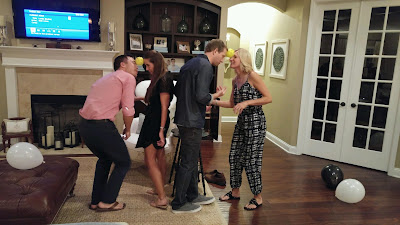 Everyone also had to try and see how long they could keep 3 balloons in the air with one hand. It was difficult enough after having a couple drinks, but especially challenging with one hand and while everyone watched. I did fairly well with three balls and Chad decided to do a playoff between myself and another gentleman. Unfortunately during the playoff, which should have been easier with only 2 balloons, I accidentally pushed the balloons over a couch and lost track of them. It was hard to keep them together and in front of me.

We had a nice night with everyone and we're glad we were able to celebrate Rachael's birthday with her.
Posted by Shawn Vernon at 4:05 PM