Weekend at the beach and meeting baby Brody 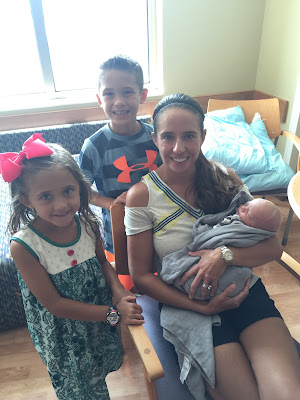 This past weekend we stayed around the area and tried to have a relaxing weekend after the kids' first day of school.

On Saturday, we went to the beach club to do tennis in the morning and then we ate lunch and spent the afternoon at the beach. We met Andrea's tennis friend Annie and her family at the beach. They brought a canopy for shade, which was nice, and also brought their two little girls. We'd hoped that Connor and Paige would enjoy having some other kids to play with, but all the kids kind of did their own thing. I spent a quite a while in the ocean playing in the waves with Connor. Paige liked to play in the waves somewhat, but isn't as crazy about it as Connor is. Connor loves to get smashed and wiped out by the waves and can't get enough of it. We saw three dolphins surfacing about 20 yards from shore and I held Paige and we walked down toward them and one surfaced about 10-15 yards from us at one point.

On Sunday, we had lunch and then went to Baptist South to visit the Froehlichs. Sarah just had her sixth baby, Brody, and we brought them some goodies/gifts and visited with them for a little while. Andrea held the baby for a little while, and so did I. I hadn't held such a little baby in a long time! Connor and Paige were disappointed the other Froehlich kids weren't around to play with, but the newborn area of the hospital probably isn't the best place to play anyways.
Posted by Shawn Vernon at 9:20 AM