This past week was probably contained the scariest and most stressful day of my life. On Monday May 3rd, we started to hear a little news about a Hurricane that was in the Caribbean which might end up coming near the US. Hurricane Matthew was in the warm waters to the south of Florida and it became more and more powerful, eventually going over Haiti where it killed hundreds of people as it strengthened to a category 4 hurricane. As the days went by, the projected path started to show that it was probably going to come up the East Coast and would potentially come near Jacksonville. By Tuesday we were starting to freak out and by Wednesday evacuation zones A and B were ordered to leave, which included our home.

Andrea and I had always kind of expected a hurricane to come near Jacksonville some day, but we never really knew how to prepare for it. School was canceled Thursday and Friday and on Wednesday we started to prepare the home, moving valuables upstairs in case we flooded, and moving outside furniture and pots around so they wouldn't blow away. Grandpa Rick came over to help me move things as best we could and we took food, supplies, and a few of our most valuable things over to Grandma and Grandpa's house. We stayed the night there Wednesday night and I went back to our house with Andrea and Grandpa Rick on Thursday morning to do some last minute storm prep. We moved a few additional things upstairs, talked to the neighbors, and even taped up the bottom of the exterior doors to possibly help keep out any rising flood waters. On Thursday afternoon, before we went back to Grandma and Grandpa's house we ate at Cantina Laredo. The restaurant was closing early for the storm and we wanted one last meal out before the city shut down.

At Grandma and Grandpa's, we tried to enjoy our time. We made some preparations for the storm in case power went out. We put food in a cooler, filled a bladder with water in the bathtub, and got flashlights and other supplies ready. The kids were thrilled to be there and played with the puppies and played games with everyone. 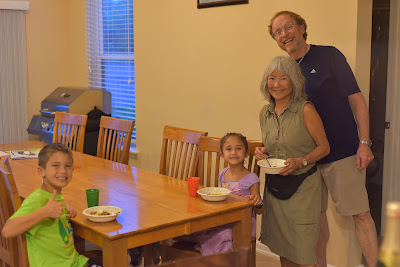 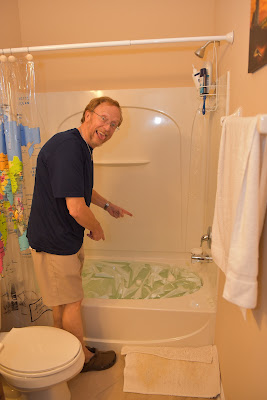 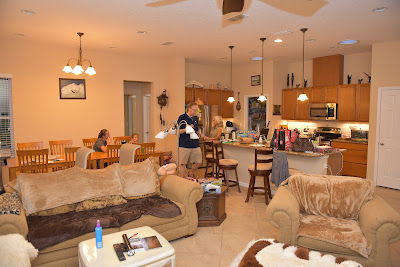 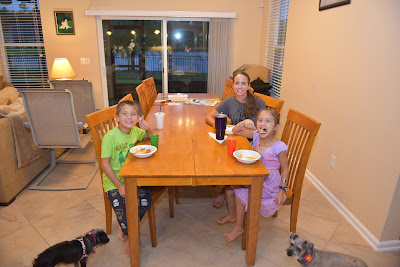 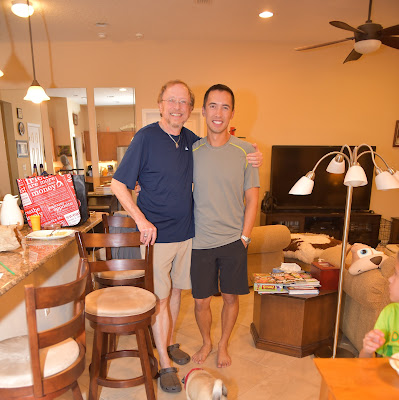 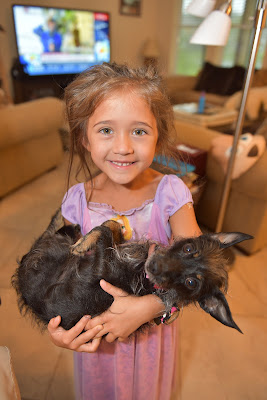 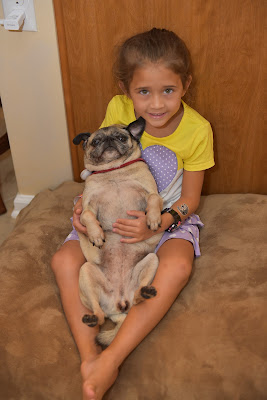 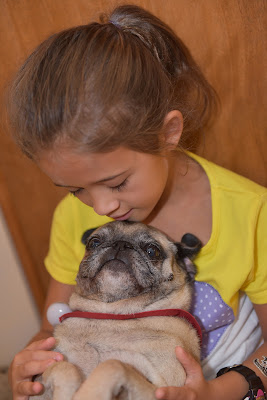 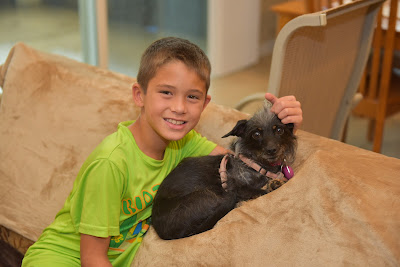 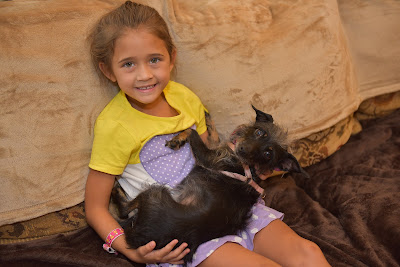 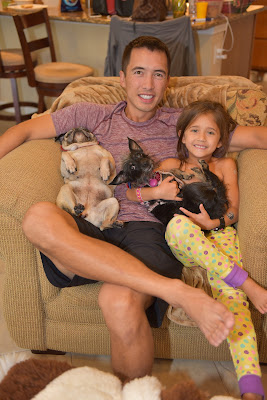 Thursday night was a difficult night and I didn't sleep much at all. I kept thinking about all the things I could have done and should have done, kept thinking about the brand new front doors we just had installed on Tuesday, the renovations which we'd just completed, the hurricane insurance deductible, the flood insurance, whether I should have gotten sandbags or other supplies. I researched the gulf stream, the jet stream, the hurricane tracks and the hurricane behavior. I only slept a couple hours.

I woke up early on Friday and checked the hurricane's progress and was crestfallen to see that it was still coming right towards Jacksonville. The hurricane tracker showed that we were still within the "Cone of Concern" and that it would possibly pass to the East of us. 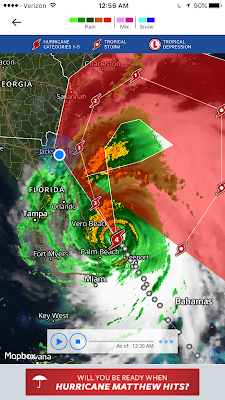 Waiting for it was agony. All day Friday we watched the news as it slowly crept towards us, flooding and destroying the coastal cities it passed by. We watched videos from Old St. Augustine of the storm surge sweeping in to the historic downtown. It was like watching a car crash in slow motion.

As it neared Jacksonville, it changed course slightly to the East and we hoped that it would pass far enough off shore that it wouldn't affect us too much. 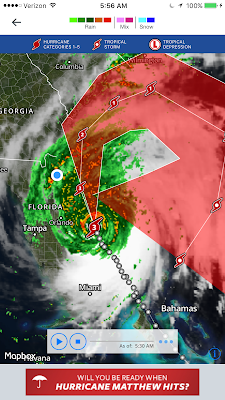 Finally it arrived. The eye was 25-30 miles off coast, and the strongest winds were out to sea, but we still had some very strong gusts. Grandpa Rick took some videos outside and we hoped the house would hold together. We were more worried about the coastal communities and our house. The hurricane was passing at high tide and the storm surge at one time was projected to be 7-11 feet high. That would have been disastrous for us. Unrelated to the storm, we'd had lots of rain before the hurricane arrived and by the time it passed Jacksonville we had over 10" of rain. 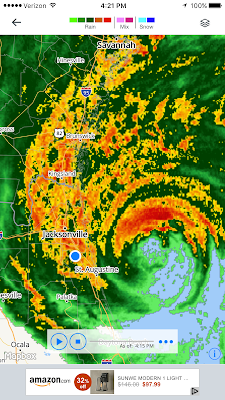 Once the hurricane passed, things got a bit calmer. Most of the rain was to the north end of the storm and that evening it cleared up quite a bit and stopped raining for the first time in days. 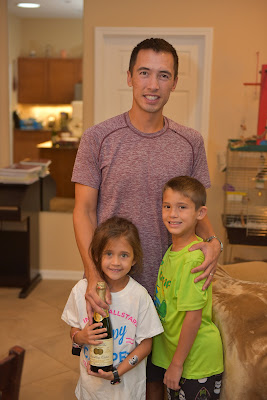 I tried to look on the bright side. I'd brought some sparkling cider with us and I'd told the kids that after we survived the storm, we'd crack it open and would celebrate, so that's what we did. I was thankful that we were all healthy and safe, but I was worried sick about the house.

Andrea and I stayed up late in to the night. It was an absolute rollercoaster of emotions while we tried to learn how our neighborhood was doing. One minute I'd feel happy that the storm passed us well out to sea. Then I'd see a video on the news of storm surge water pouring through Jacksonville Beach coastal areas and I'd feel despair. Then, I'd realize that they were only focusing on the worst flooding in the area and that overall there wasn't that much flooding. Then, we'd find news from some locals that stayed in their homes and they'd tell us that the flooding wasn't very bad. Then, we'd hear from another local that heard second hand that our whole neighborhood was under water. Then, we'd find some pictures showing just a few inches of water on a few streets and we'd feel some hope. Then, we found a picture showing a house down the street from us with a sheet of water covering the entire street and up near their garage and we'd start freaking out and wondering if that was as bad as it got, or if that was just the beginning. Then we found a video of some neighbor boys splashing around their cul-de-sac which was flooded. 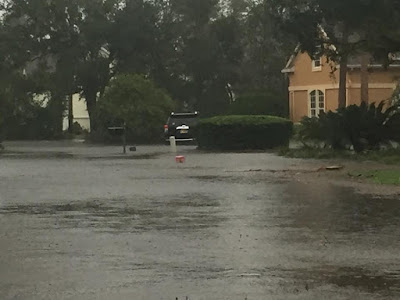 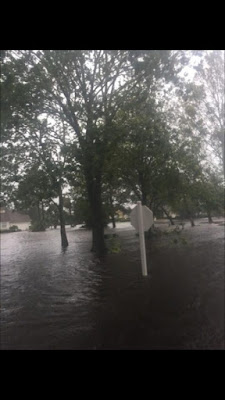 It was terrible not knowing. We had watched our cameras on our phones for a little while, but around 2pm when the storm arrived, the power went out at our house and we couldn't log in to see anything. We obsessed over the few pictures we found. We would track down where they were in the neighborhood, what their elevation was using Google Earth, how they were positioned relative to the marsh, etc.

We went to bed that night, unsure of what we'd find in the morning. On Saturday morning, we heard news that they were going to open the bridges to the beaches around noon. Andrea and I packed up some of our things and got in the car and we drove out and waited in line behind everyone. At first, it was unclear if they'd let people from Ponte Vedra Beach in as well, because just the Jacksonville beach people were told that they could go home. 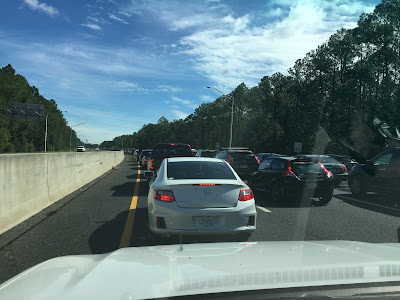 A little afternoon, we heard that another bridge had opened and shortly after that, the line of cars started to move. They let everyone through without checking ID's or anything which was a relief. We crossed the bridge and turned in to our neighborhood. We had to be careful of the downed trees, but I hurried to our house. We were thrilled when we saw it. There were leaves and branches everywhere, but the house looked fine. We pulled in to the driveway and ran to the front door and peeked inside. We were so excited and relieved to see that everything looked dry. The water had clearly come through our yard and at one point had come within a few feet of the front door, but it didn't get inside. 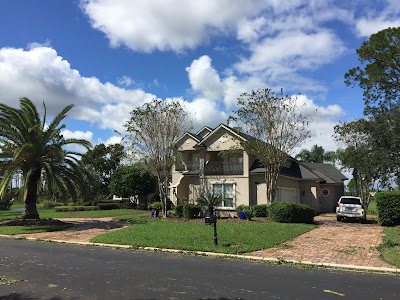 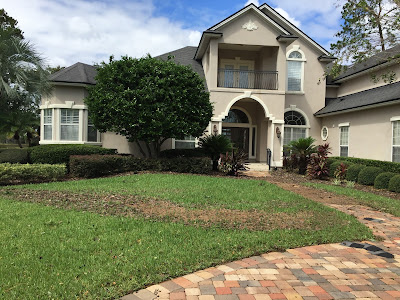 We had some wind damage where a piece of the roofline got torn off. We lost some shingles as well. 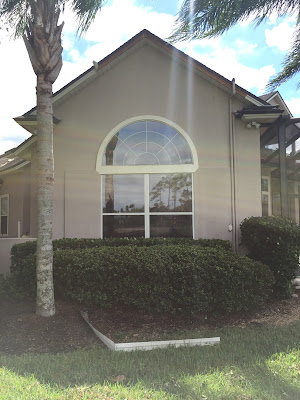 A few of the screen pieces in our enclosure were completely gone and some pieces were hanging and blowing in the wind. 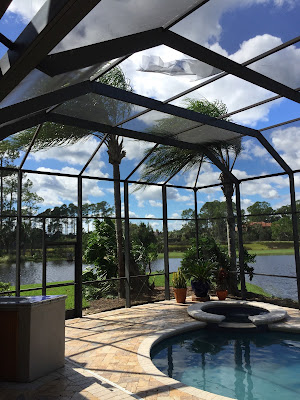 Overall though, we were overjoyed. We checked on some neighbor houses and then drove around the neighborhood. There were trees down everywhere and some of the houses didn't do so well. We heard that a few houses got water in their garages and a few got water inside the homes. Not a lot, but we felt terrible for those people, I was sure that's what we'd come home to. I wish we could have seen the water that was on our street. From the washed up debris, it's clear that some flowed through our yard at one point, but it wasn't clear how much or where it came from. 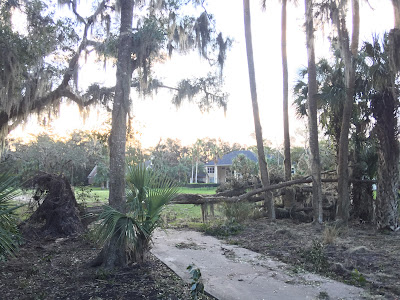 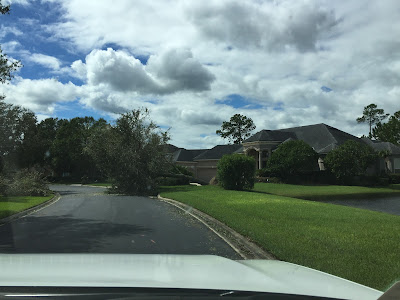 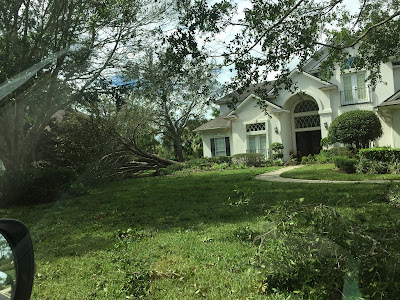 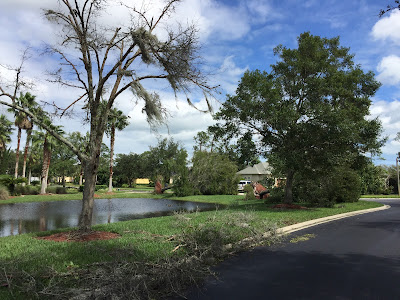 We spent the rest of the weekend cleaning up. There was plenty to do. The rest of the day Saturday, I put the house back together and repaired what I could from the storm damage. Most of it was minor, but it took quite a bit of time.

On Sunday we went and picked the kids up. They were out for a walk with Grandma when we arrived. 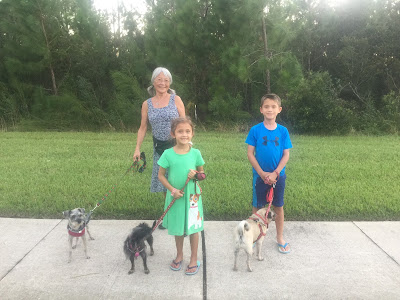 We loaded up the rest of the things we'd brought to their house and then went home. With everyone's help, we picked up all the broken branches, washed up mulch, and everything else that was in the yard and got the house all cleaned up. 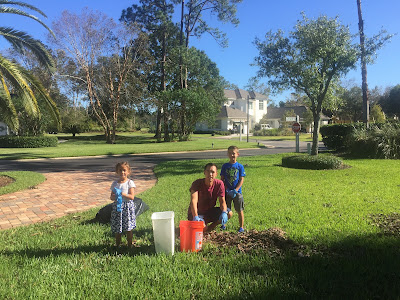 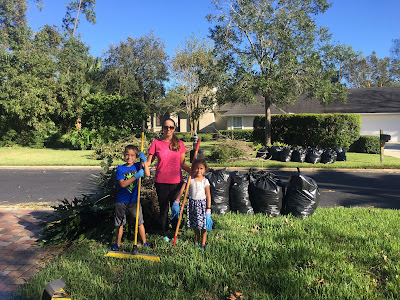 It was a busy weekend and a stressful time for us. I will admit I struggled terribly with it. I'm thankful for Andrea, who helped keep me positive and hopeful when I was down in the dumps. I'm thankful that we had such a comfortable and cozy safe place to stay with Grandma and Grandpa, and glad that they welcomed us in to their home and helped so much with everything. I'm thankful for the kids for being so happy and easy while we were cooped up for days indoors. Lastly, I suppose I'm thankful to Hurricane Matthew for sparing our home. There are a lot of people that had much sadder endings after this storm and I hope this is something I don't have to live through again any time soon.
Posted by Shawn Vernon at 7:58 PM