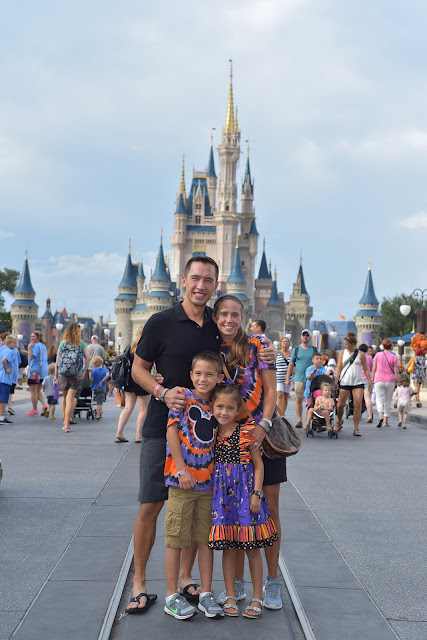 On Friday we went to Mickey's Not So Scary Halloween Party for our 5th year in a row. The price has gone up this year and it's definitely less of a "secret" than it used to be. We haven't been doing as much this year and we realized we hadn't been to Orlando in a long time and hadn't been to Disney since the Christmas party. It was good to eat at Uno's and we did see our favorite waitress and she still remembered us.

We checked in to the Beach Club Villas and changed in to our Disney outfits and then took the bus to the park. Connor and Mommy got matching shirts this year and Connor wanted to pretend that Mommy was his big sister. Andrea got Paige a very cute coordinating Halloween dress. While we didn't get all dressed up in costumes, it was fun to dress up together for the day. 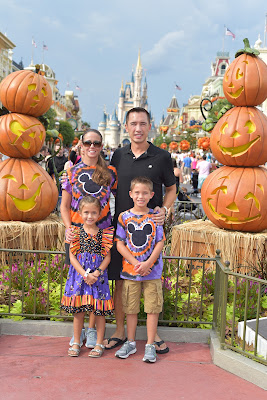 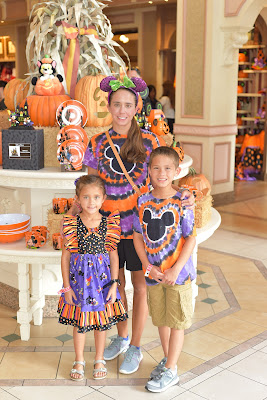 After getting in to the park, we went in to one of the shops and Paige picked out a souvenir immediately. 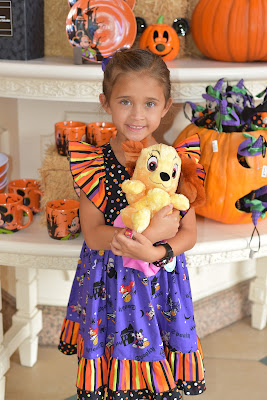 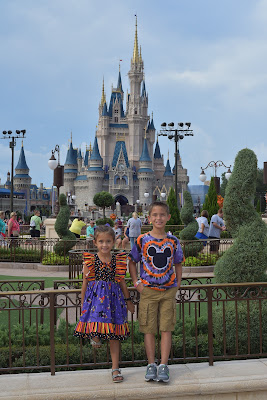 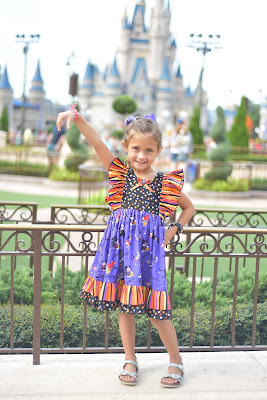 We typically take a right turn after entering the park and go to Tommorrowland, but this time we decided we should go left and see how that would work. We started on the Aladdin ride and then rode the Jungle Cruise, Pirates of the Caribbean and then Splash Mountain. The lines were a bit long and we waited 25 minutes for some of the rides until the regular visitors got kicked out of the park. 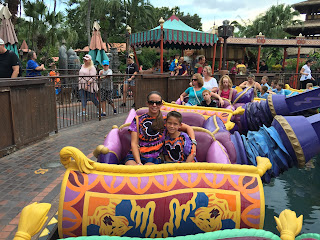 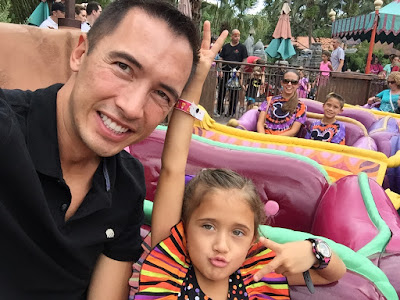 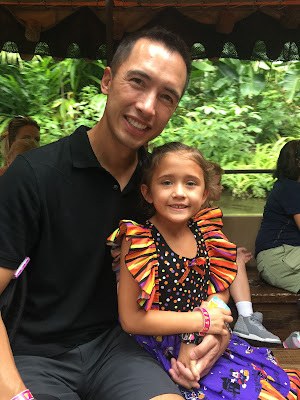 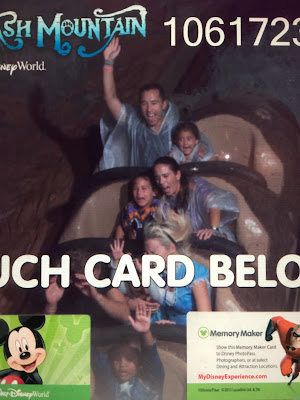 Once it got a little later, it wasn't quite so busy. We got the kids 2016 Halloween Party trick-or-treat bags and did quite a bit of trick or treating and got a bunch of candy. 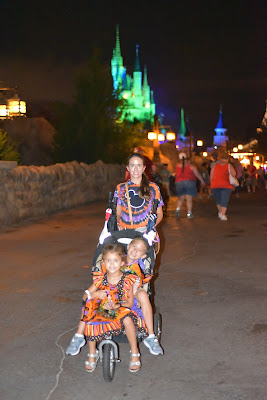 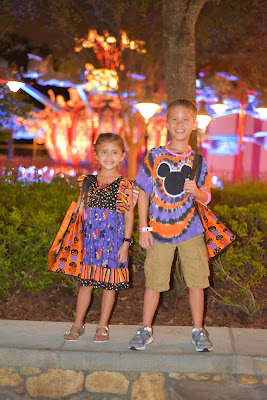 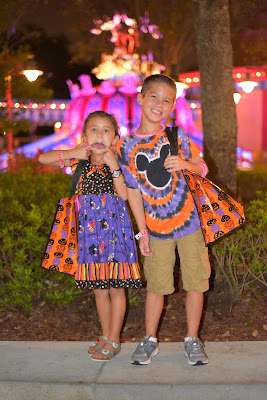 The kids played "Pin the Boo on the Ghost" in one of the shops, and it was a good spot to get lots of candy in the trick or treat lines. 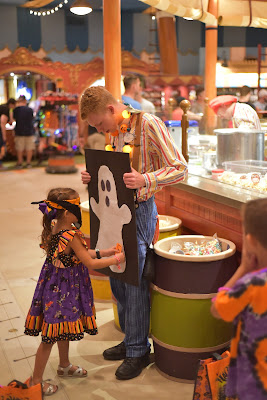 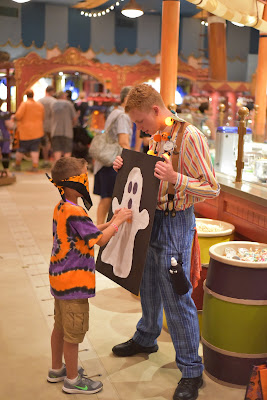 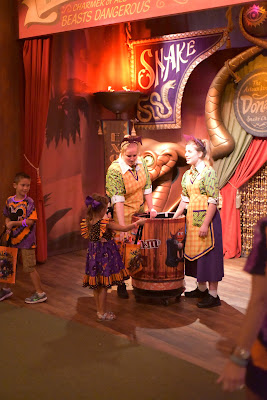 Connor and I rode at the front of the Barnstormer and we decided to go on it a second time around 10:30. Right as we got to the line, it started to pour rain. We found a little bit of shelter under some small decorative circle covers in the line, but we were still getting pretty wet. We stood out there for at least 15 minutes until the rain died down a little, then we ran over to the rest rooms where Paige and Andrea were waiting. We decided to call it a night, and covered the stroller with a poncho, opened up some umbrellas and started the trek back to the front of the park. Thankfully we didn't have to wait long for the bus, but we had to stand on the way back to the hotel.

We all were very tired by the time we got back to the hotel and fell asleep quickly. The next morning I was surprised we slept in pretty late and went to an early lunch at Uno's. After lunch, we put on our swimming things and explored the resort area. 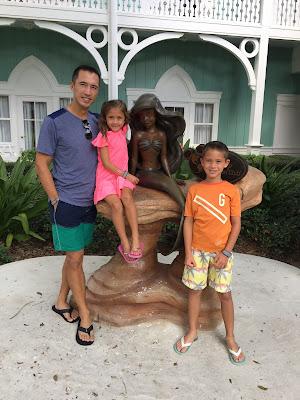 Connor did a little shopping, but he didn't find anything for his souvenir. 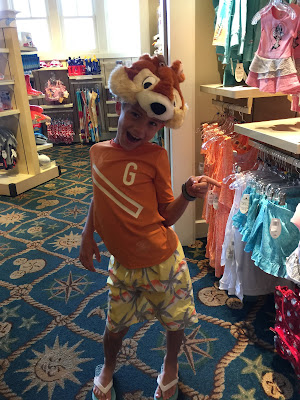 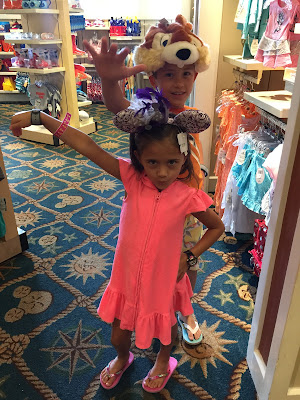 We swam in the pool for quite a while in the afternoon. Andrea snapped a pic of me with the kids before we all got wet. 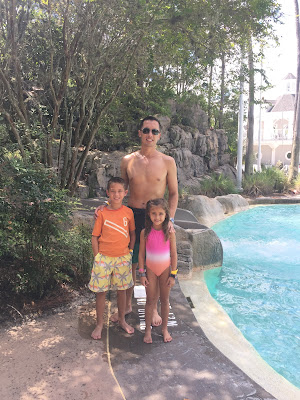 There was a pirate ship with a slide on it, which ended in a sandy pool. I took the kids up and Andrea took a video as we all came down. Unfortunately, Paige changed her mind at the last minute and went back down the stairs. Andrea was expecting her to follow me, and she didn't. You can see me hurrying out of the pool to go find her. She eventually did go down the slide and Andrea did too.


The pool also had a lazy river, and we all had fun swimming around and playing together in the pool. The deeper parts of the pool had nice white sand at the bottom, and it was one of the nicer hotel pools.

After swimming, we walked to the Boardwalk for dinner. While we ate, Connor spotted a basketball game in a carnival-type area. We watched a few kids try it and fail, and asked the worker which game was the easiest to win. The water spraying game guaranteed a prize, so Connor decided to give it a try.

Andrea and Connor played the water game first and Andrea got on target quickly and was the winner.

Connor had all weekend to shop for his souvenir, but at the end of the day the thing he wanted most was a chance to win another blue monkey. I played against him and didn't pull the trigger properly and got off to a terrible start. I bumped him a little to get him off target, but he still beat me! 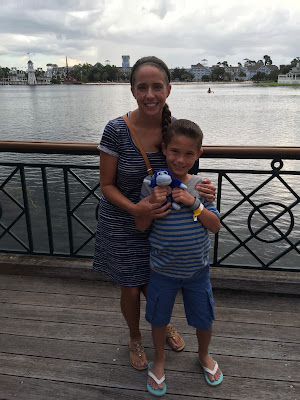 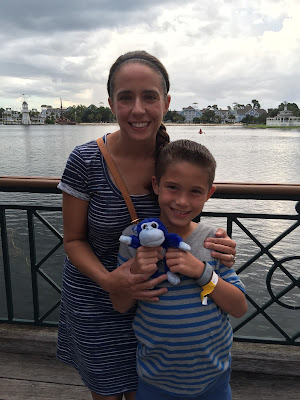 Connor was happy to win the first Monkey with Mommy and was even more excited that he found an abandoned monkey at the Boardwalk and then won another monkey. Just what we needed, lots of new stuffed animals! 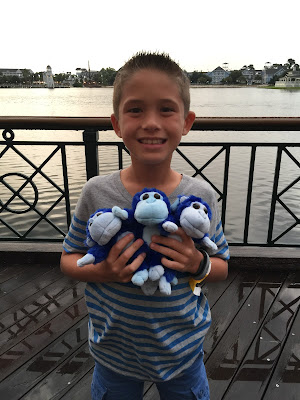 We slept in a little on Sunday, ate at Uno's and then drove home. It was a fun weekend and I'm thankful that we finally made it down to Orlando this year.
Posted by Shawn Vernon at 3:22 PM