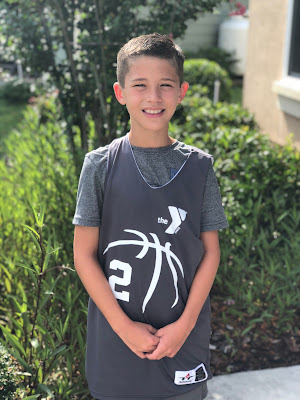 Connor had his first basketball game with his new YMCA team on Saturday at 3. He played really well and scored 4 points. His team ended up winning 26-5. Connor played well throughout the game, but somewhere during the first half he heard the coach telling the kids to pass the ball and suddenly that was all he did whenever he got the ball. He is a super unselfish player, and it he really did have some nice passes. However, there were a few missed opportunities where he got the ball and was wide open, and rather than take the open shot he was looking for an open teammate and gave the ball away unnecessarily. It's neat that the kids on his team all go to his school, and it's also nice that it's a fun summer activity that they can do indoors when it's hot out. It's a pretty short season, so hopefully we'll be able to make most of the games.
Posted by Shawn Vernon at 5:35 PM