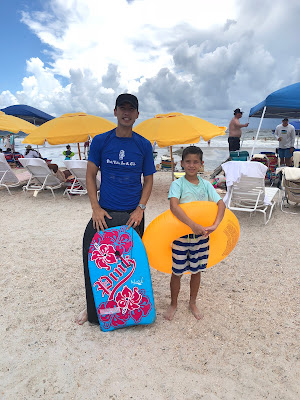 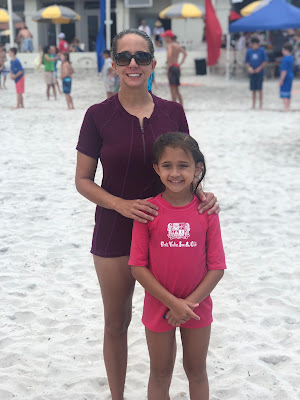 We spent July 4th this year at the club and beach. We had lunch, and then got our chairs at the beach. We usually don't bother with renting chairs and an umbrella, but we'd planned to spend a while at the beach so decided to get them on the 4th. I really enjoyed it a lot more than I expected, the chairs were comfortable and it was nice to have a little shady spot in the sand. I'm glad Andrea called early because every chair and umbrella was reserved and the beach was about as busy as we've ever seen.

The waves were super high, and more exciting than we'd experienced in Jacksonville. It was a red flag day and while we normally don't go out on red flag days, there were a lot of people around and lots of lifeguards. We also brought out a couple of boogie boards to float with and an inflatable ring. We had a blast in the waves. It was a good time until one of the big waves surprised Andrea and flopped her around to the ocean floor where she banged up her left knee. She ended up with a bruise on it, and it was a bummer of a way to end the swimming in the ocean.

After a few hours we saw some big clouds out in the ocean. We weren't sure if it was coming our way until we suddenly felt the air change and get cooler. We hustled to get our bags and beach stuff and went to the restaurant just as it started pouring. The staff remembered us, and got us a nice table in the covered area and we enjoyed some dessert as the rain rolled through. It stopped raining pretty quickly and then we went back out again. 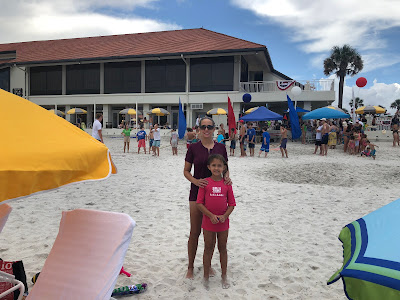 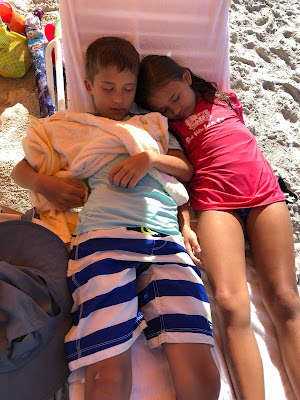 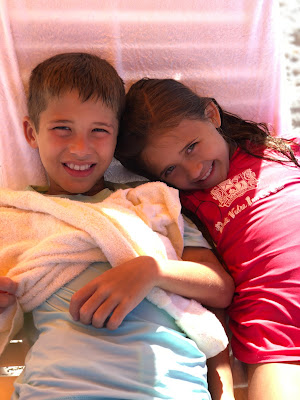 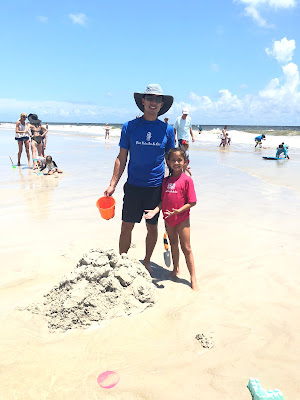 It was fun to spend the day at the beach and fun to see some of our friends and enjoy the beach. Although we've been in Florida now for 6 years, it's still sometimes surprising that we live somewhere with such easy and convenient access to the beach and such a nice area. It was a great day and a great way to celebrate the 4th of July.
Posted by Shawn Vernon at 5:11 PM