On Saturday afternoon we planned to get together with the Froehlichs at the beach club. It seems like every time we try to have a beach day with them it rains and although the forecast on Saturday initially looked good, a bunch of rain blew through right when we were planning to meet them.

As they were on their way, we decided to text them and just invited them over to our house. Hayden had a birthday party with a friend, and the two little guys were with a babysitter, so it was just Reese, Cooper and Ty. Paige and Reese played inside together on the computer for a bit and then swam together in the pool. The boys played Fortnite together on the Xbox and phone. The adults just chatted for a bit, Steve and I went to Publix and Chick-Fil-A for some food, and then we hung out in the lanai while the girls swam. They're probably one of our favorite families to get together with since both Connor and Paige have buddies they get along with, and Steve and Sarah are both so easy to talk to. It wasn't exactly what we'd planned, but they probably hung out at our house longer than we would have spent at the beach, so it worked out nicely. 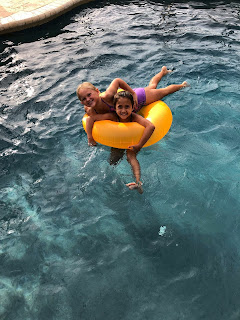 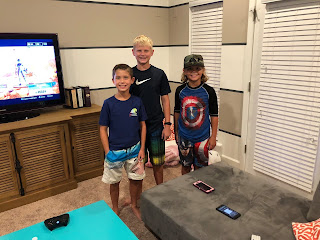 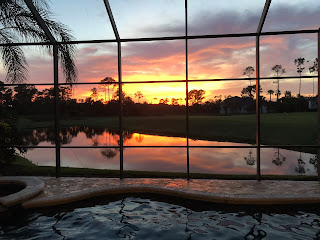