Kids and Daddy for the weekend 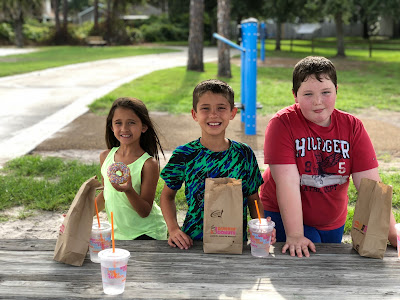 Andrea went to Tara's beach house this past weekend with some of her JCP friends, so I was at home with the guys by myself. After camp on Friday we got all the yummy food we like and then stayed up late goofing off. On Saturday we had tennis in the morning and then Logan came over. He's been in NY all year, so while he's visiting his dad for the summer it was nice to get together with him.

Connor and Logan played Fortnite for a while and then we went to Dunkin Donuts and the park. The kids enjoyed their snack and then we played for a little while. Unfortunately much of the park was shut down for improvements, but we did enjoy the tire swing for a bit. 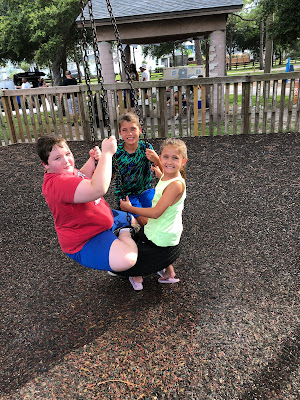 All three did the tire swing briefly, and then Paige wanted to swing on her own for a long time.

I tried to make sure that the swing was mostly just going around in a circular pattern and not so much spinning. Even so, Paige closed her eyes and leaned back, which probably intensified the motion feeling. I warned her not to do it, but unfortunately it was too late. She started feeling bad after a little while and after we got home she threw up in a bowl. I guess we both should have known better, poor Paigie.

Logan went home late on Saturday night and we slept in and went to Connor's basketball game on Sunday. His basketball game was a bit rough since they only had 5 kids and no subs. They did their best and were within 2 points near the end of the game. Connor scored most of the points for the team, but sadly they lost 29-34.

It was a nice weekend, and a change from our normal routine, but we were all happy to have Andrea home on Sunday.
Posted by Shawn Vernon at 2:08 PM